« on: August 07, 2020, 05:19 PM »
PAExec is a legally redistributable clone of the Microsoft Sysinternals psexec remote execute utility. Totally drop-in compatible plus has some additional options.
https://www.poweradmin.com/paexec/
52

« on: July 30, 2020, 05:30 PM »
Anyone have any random thoughts on cryptocurrencies, specifically which variants will tend to be long-lived, and which will actually give you a chance to realistically mine a little? Bitcoin is of course the old master but a "real person" (without hard core hardware) will never mine one unless you're in a pool and get a fraction of credit. Is Litecoin defunct? Looked to be $50-ish per when I last checked, but I don't know how the cost/benefit works for it. Ethereum seems to be the current sweetheart, but we've seen those come and go. While you can't guarantee the worth over time, you'd like to choose a coin that would be difficult to hijack.

I had mined about a bit-dime's worth of bitcoin but stopped for a year or two when I changed hardware. When I picked it back up there were like two levels of update for the bitchain client software, and while my wallet showed that it was not corrupted, and showed the amount properly, the password that I had noted (and literally a hundred variations on it) weren't accepted for a transfer. I found that to be less than optimal.

Anyway I have some hardware sitting around, including a middlin' GPU that I used for some john and hashcat for work, but that's finished. Seems I ought to do something with it but since I'd start fresh, I thought I'd ask folks more knowledgeable than me. Some of the coin algorithms don't benefit from a GPU I understand.


PS- Anyone suggestions on cracking that bitcoin wallet? Try hashcat (passphrase was 22 characters)? Is there a way to use out of date software to pull the data from it in a form I can use? Whenever I tried to install old versions it insisted in updating due to blockchain changes.
53

Been using this for several years for various reasons. When you have a session it tends to use a good bit of cpu (25-50%) and some memory as well, but works great and no significant resource drain when it is just waiting for connection.

The main down side to me is that it does not add an entry in the system's event log when a session starts or ends.

Please folks don't start submitting it to a/v engines or they will start marking it as a PUP and it will be a pain.

« on: July 01, 2020, 05:56 PM »
You could try CalcTape. Free version uses about 30mb, does percentages and appears to do variables as well. It saves everything on a tape and you can edit the numbers and it will recalculate. You can purchase the pro version for $6.95us for more features.

I have seen a lot of folks here praise Opalcalc as @flamerz said. I generally am satisfied with the Windows or Android calculator so you have to make your own value judgements.

Every time I hear something like this I think of A Fire Upon the Deep by Vernor Vinge. I need to reread, it has been almost 30 years now.

DC Website Help and Extras / Re: I forgot how to donate to someone who makes me software - which thread to read?

Go through Paypal to get some credits. Then you can donate by clicking the coin under the person's name:

The value is up to you! How much do you appreciate what was done for you? How much effort will this save you? If you bought this from a store what would it cost you? Think about those guidelines, just remember it is a token of your gratitude. I think a lot of folks here get real enjoyment for writing a program to fulfill a need, but maybe a cup or two of joe would make their day nicer!
59

« on: June 07, 2020, 02:31 PM »
I don't ever trust Windows to set the page file size properly. Too many times I work on a server that is wonked out and I see it is set to "let Windows manage my page file size" and it the size is like 1200mb even when the "windows recommended size" is like 6144. Put it on a separate partition if you can, but manually set the low and high limits to be identical, if you have space to make it the same as your memory size then do that. If you tweak it try to measure your performance gains, otherwise go for stability.
61

Has anyone used BlueCon enough to  have an opinion on it?
62

« on: May 15, 2020, 03:20 PM »
Outwit is a collection of several command line utilities including winclip.exe, which I use to sort the contents of my clipboard. Copy the items you want, then "winclip -p | sort | winclip -c" to pull the contents, sort it, and push it back on the clipboard. There are far more utilities that put things onto the clipboard than pull them off.

I've also used Dolphin Text Editor Menu to do this. It adds a number of features whenever you're editing text, even in Notepad. Select the text and hit the hotkey and you get a pop up menu of options from sorting to changing case to removing leading or trailing blanks, etc.
63

Nice utility but stick to the original windows binary. If you navigate to the msi that says you can encrypt folders, it behaves less well and insists on showing a dialog asking about using the clipboard as the key even when kicked off from the command line. The question isn't clear and it hangs if you say no, or at least I'm not sure what it was waiting on.

You will be assimilated.

ZoomBot will perform the assimilation securely.
65

I have had the cheapie green lasers ($15) for starwatching, the ones that screw apart in the middle and take AA batteries. They work but end up being flaky and breaking. This one is thicker and more sturdy, and is USB rechargeable, and is still a safe class IIIa (or 3R new system, <5mW) pointer. Comes with one of those diffractors that spreads the beam into a grid (which does not interest me). And it was ~$20us so not significantly more expensive. 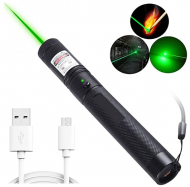 I have not yet tested its claim of waterproofness and have no plans to.

For those who need some respite from the craziness, this may help. As the House Beautiful article says: "Not to mention, listening to Bob Ross as he paints a picture is extremely therapeutic. If you’re highly anxious or just overall exhausted, his videos can offer you a calming effect that’s as reliable as a weighted blanket."

And that's absolutely true. Try a few and see. A link to the Bob Ross page is https://www.youtube....rt=dd&shelf_id=7

Here is the reference I found that mentions the offer:
https://www.housebea...rZZzm9_Rl-FzR729lBcw
67

« on: March 25, 2020, 06:03 AM »
Well I had a lot of work to do changing service and task passwords (including boxes with a hundred or more tasks) and was not looking forward to manual process or debugging powershells. But I located Service Credentials Manager from CJWDEV. I actually sprung for the Standard (paid) edition which I downloaded and it worked excellently.

SCMEasily track down all of the Windows services and scheduled tasks using a specific account
When it comes to changing an admin or service account password there is almost always at least one service or scheduled task that is only discovered when the service stops working after the password change, so this tool was developed to help make sure you have discovered every single one and it can also update the password on each of them remotely for you.

Time Saving - Scan any number of servers to automatically find all Windows services and scheduled tasks and see who they are running as
Import Computers - Import a list of computers to scan from an Active Directory OU, CSV file, or manually type them in
Task Scheduler 2.0 Compatible - Works with Server 2008 format scheduled tasks as well as XP/2003 format
Intelligent - Automatically looks up alternate formats for the username you specify (i.e. searching for DOMAIN\User will also find [email protected])
Fast - Uses native Windows APIs (does not rely on WMI) and multi-threading to query multiple remote servers quickly
Managed Service Account Aware - Works with Managed Service Accounts, allowing you to find and update services running under MSA credentials

Standard Edition
Standard edition includes all of the features included in the free edition listed above, as well as the following features:
Automate Credential Changes - Remotely update any services/tasks you want to change credentials for
Find Specific Accounts Only - Option to find only services/tasks that are running as a specific account and to exclude built in system accounts
Export Results - Export the list of results to native Excel file, CSV file or HTML file
Correct Service Dependency Handling - After updating credentials, dependant services are restarted in the correct order to avoid failures
Automatically Grants Required Rights - Automatically grants the new account the Log On As A Service right on the computer the service resides on
Alternate Credentials - Optionally specify alternate credentials to be used for individual computers in the report

ONE NOTE HOWEVER, it appears the developer has been missing for several years. The site and payment systems work fine (did for me in the US) but you can find stories from other people that, for example they did not download the full set of tools they bought right away and the download links have expired.
68

I could swear I just right clicked the tiles and deleted the ones like that. No, it was Unpin from Start.
71

Developer's Corner / Re: Brainstorm for a cross-platform programming language

I despise Java (from a break/fix viewpoint at least). My cross-platform go-to (pun intended) is always Rexx.

General Software Discussion / Re: I need an alternative to FileBox eXtender for w10 home

I also have a license for Direct Folders (from CodeSector) which has similar features.
74

Briefly - exploit could allow the following to be accepted as valid:

(Thanks to Kenneth White at https://blog.lessons....org/chain-of-fools/ for the clear explanation.)
75 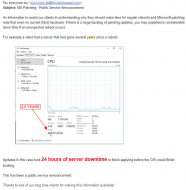