KodeZwerg's Realm / Re: Remind me, Hate me, Thank me... open letter to me

We all get here on different paths and see different things along the way - and as Curt reminds us, what we're looking for might already be here!

« on: April 25, 2021, 03:55 PM »
Just as a note, Lopesoft FileMenu Tools includes a "pack to folder" option that does what you want (among many other useful things). There's a limit of packing 20 objects for the free version, a license (€10+vat) removes that restriction. I purchased a license years ago and it has worked well.
6

In this age of anxiety, anger and contestations between the West and the Islamic world, many epoch-shaping stories of intellectual exchanges between our cultures are often forgotten.

A powerful example comes from literature. Millions of Christian, Jewish and Muslim readers across the world have read that famed tale of the man stranded alone on an island: “Robinson Crusoe” by Daniel Defoe, the 18th-century British pamphleteer, political activist and novelist.

Ibn Tufayl’s novel tells the tale of Hayy, a boy growing up alone on a deserted island, with animals. As he grows up, Hayy uses his senses and reason to understand the workings of the natural world. He explores the laws of nature, devises a rational theology and entertains theories about the origin of the universe. He develops a sense of ethics: Out of mercy for animals, he turns vegetarian, and out of care for plants, he preserves their seeds.

Of course there is more, sounds very interesting. This is generally not my style of book at all, I prefer the SF that I gorged on in the 60s and 70s, but I have less time and often just pull out the Kindle. That said, my SIL referenced this article in a post and I am now committed to reading this so we can all discuss it when we meet this summer.

I am looking forward to it but it will be more work than I am used to...
7

« on: April 22, 2021, 05:52 AM »
Contro do you have "Here We Go" maps installed? This app downloads the maps ahead of time. I do not know if it has Canary Islands however I can verify that the app works well. I have a couple of phones with no sim card and the maps work great. Very handy if you are "away from the grid" or if you are in a huge crowd and everyone else got all the cell connections before you.

« on: April 17, 2021, 10:22 AM »
You know, looking at the RollbackRX product page, I can see how you would "lose" disk space. It is creating snapshots of your system for recovery. So if you downloaded a bunch of movies or had them on your C: drive, then when it does a snapshot it would have to safeguard that data which would mean protect it from being overwritten or removed. That stuff has to be stored somewhere, doesn't look like any options to put it anywhere else. So probably your disk use would depend on how many snapshots you keep, how often you clean big files off your disk, and how often you reset the baseline.

The free version looks interesting and I can see a use case for example on my son's pc where there just isn't that much that changes. I guess this software worked fine for you other than the disk space issue?
9

Screenshot Captor / Re: Some thumbnails only show an icon

Right click on Downloads and go to Properties and click the Location tab. Use the Move button to change the place where Downloads points: 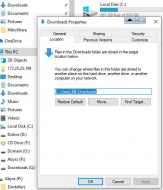 If you're going to save videos in Downloads, best to move it away from C: if you can.
12

Maybe that should get you to make a NANY 2022 area?

The first time it ran Avast slapped it while it checked if it was ok, which threw a few unhandled exceptions, then when it decided the program was ok it restarted fine. I moved the exe into a good place and added the content menu, very handy tool! Thank you!

Living Room / Re: Gizmo's is saying farewell - leaving behind a huge legacy!

Does not make me want to revisit.

« on: March 11, 2021, 07:50 PM »
On my Win 10 20H2 system, dual monitors but no special management software for it, with taskbar set to auto-hide, this app indeed makes the taskbar on the primary monitor go away and stay away. No issue with full screen programs or mousing into the edge. If I hit the Windows key, the start menu pops up but does not show over the area where the taskbar would be. On the second screen the taskbar will still pop up if I mouse into the edge.

FWIW, ever since my daughter shoved her laptop in the bag with the tiny mouse dongle still there, and it proceeded to shove itself into the innards and ruin that port (thankfully nothing else), I have insisted on making all dongle connections with these 6" extenders (sample pic). There's no way to forget something is plugged in. Additional benefit, my wife's arthritis in her hands is fairly advanced and these make it possible for her to plug and unplug a tiny dongle. 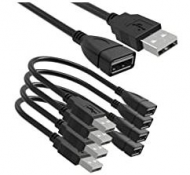 Yes, that it does! It is very different from CSVpad, I'd say a much more "primitive" interface and uses more screen space. At least it's not just wasted white space like so many programs (looking at you, MS 365 admin!).
20

Screenshot Captor / Re: Capture of Second Screen is Messed up

« on: January 23, 2021, 07:16 PM »
No, I apologize, I see what you mean, I was not reading the post carefully enough and was thinking the problem was the second screen in the capture of the entire workspace. If you're capturing just the second screen, you would like it to be 1920x1080 instead of 2560x1440 which is the highest rez of your screens.

Did you select something on your second screen and choose the "Grab Current Screen" option for your example? I don't recall the keypress for that because I swap two of mine. I always (99.99% of the time) use the "Grab Selected Region" option and that's what I map my PrtScr key to. If you use that option you should be able to select the whole screen and it should come out correct.
25

Screenshot Captor / Re: Capture of Second Screen is Messed up

« on: January 23, 2021, 05:03 PM »
Likely. What would you have SC do in that case? You wouldn't necessarily want to expand the smaller screen automatically to be "the same" height because that would alter the relationship between the two which might be significant.

I can see that the extra space on the right side might be automatically removed since it would not be significant, maybe that would be an option for Mouser to consider.
Pages: [1] 2 3 4 5 6 ... 33 • next
view mobile/wap2 version of this page