As you probably have already noticed, I haven't had the time to update GridMove as frequently as I should.
So, I've decided to make the fact that GridMove is open-source more explicit. Even though the source has been available at GridMove's site for a while, it wasn't very easy to fork, so I have created a GitHub project for it.
Not only does this simplify integrating any changes other people propose, but also makes it easier for me to update the code.

Please keep in mind that (unfortunately) this will probably not reflect in more frequent updates for the compiled version available on the site, since it's really hard for me to test code or create new packaged versions (mostly due to the fact that since 2 years ago I've moved completely to mac).

So, I leave you with a link to the repository: https://github.com/jgpaiva/GridMove
3

« on: February 14, 2013, 06:12 AM »
I've been trying to learn some python (trying to add some value to the huge amount of procrastination I've been doing recently), and I've found this site: http://www.checkio.org/ 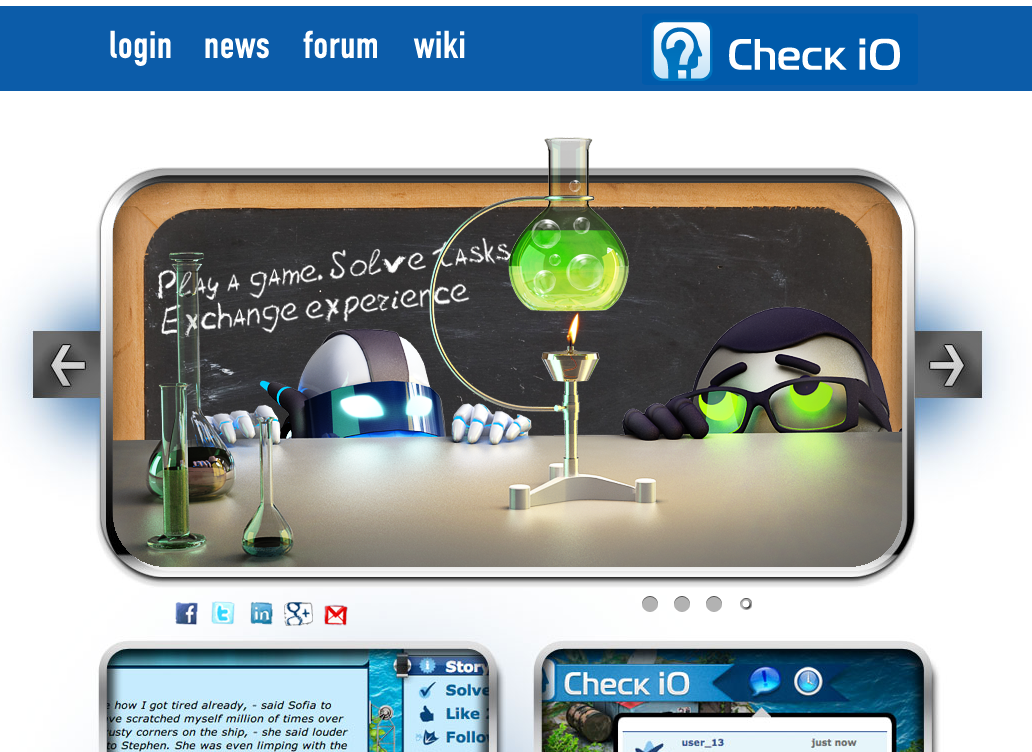 It's pretty interesting because it also features this "after you complete the challenge you can see other's solutions" mentality, and has quite a large user base. However, it has four drawbacks: 1 - the english may be incomprehensible at times, 2 - you must use their interpreter (which misses some modules such as numpy), 3 - the challenges start way too hard, you'll have to know the very basics already 4 - some challenges are not very much a programming exercise but mostly a math challenge (the one I'm now requires me to do trajectory intersections).

I think the biggest advantage is the fact that there are *many* solutions, ranging from way too complicated to very simple, and every solution has a lot of user comments picking apart the code and suggesting improvements.
4 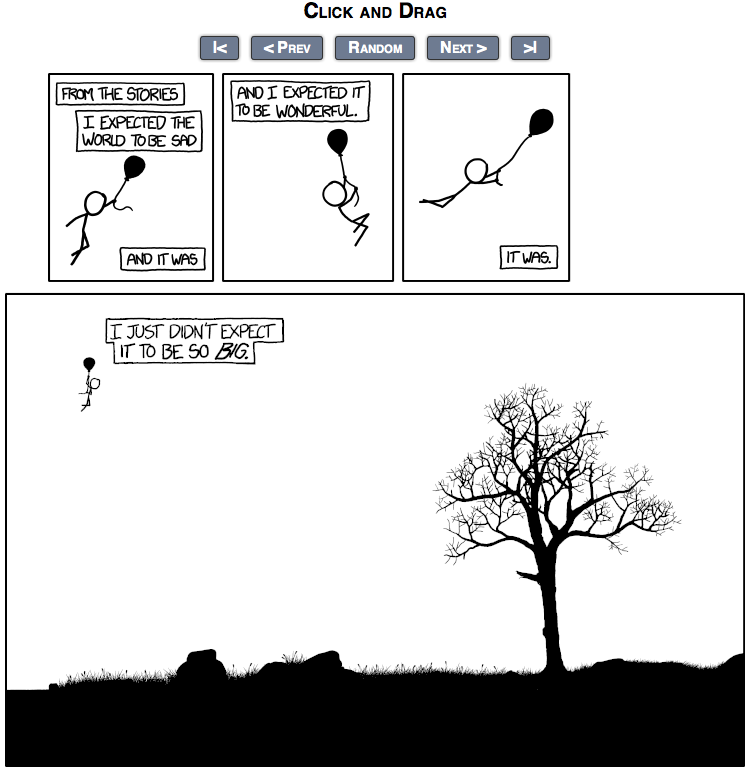 But this makes it even better: http://xkcd-map.rent-a-geek.de/
5

Find And Run Robot / MOVED: Does the "Process Tamer" work on a "Placebo effect"!?

General Software Discussion / What is the ctrl-alt-del and does it exist in other OSs?

« on: July 11, 2012, 04:05 AM »
As a Mac user, and former Linux and Windows user, I really miss having ctrl-alt-del available (you may think "why do you need ctrl-alt-del in a mac? the OS is perfect and never crashes!" and I must answer: "my friend, stop drinking so much kool-aid, it's hurting your brain"). My problem is that even though both mac and linux have a myriad of ways of listing the processes and killing them, when the computer is hung up they don't seem to respond in the same way as ctrl-alt-del in Windows does.
Allow me to clarify: I have this (possibly romantic) idea that when my computer was hung up in windows, pressing ctrl-alt-del would bring up the dialog (which sort of depends on the version of the OS, it used to be only the process manager but I believe it evolved to something else in the meanwhile) even if no other process would start or advance at all. This is the crucial difference: from what I understand, the process managers and such in mac and linux are just yet another process, which being treated as such may not start at all (or take two days to do so, if the computer is really hung up), whereas in Windows the process manager always comes up fairly quickly unless in the case where there has been a serious crash and reset is the only solution.

What is your say in this? Am I being too romantic and the process manager in windows is exactly the same in any other OS, is there something to objectively differentiate it, or am I using the wrong process managers in mac/linux?

So, here's my recent experience with Portal 2.
I had bought Portal 1 and loved it, so as soon as Portal 2 came out, I really really wanted to buy it.
My problems at the time were that:
1 - I have a not so good computer (which to make matters worse is a mac)
2 - Valve decided they would not create a demo for portal 2
So, when the game came out, it cost like 50€, and I had no way to know if it would ever run on my computer. Thanks for that, Valve, you've just lost part of my money!
Also, the computer being a mac, there were no pirated versions of portal for me to test it.

Ok, so three or four weeks ago, a pirated version for mac came up on the internet. I downloaded it in 4 hours, took 20min to understand how to install it, and after another 30minutes of installing it, I was happily playing portal 2 on my mac with no problems.
I figured that as it ran so well, I should buy the original version and buy another copy for a friend of mine. Since it was selling at amazon for 20€, less than it was on steam (WHY??? If they sell it to amazon, why it is more expensive for us to buy the digital version which has almost no costs for them?), I bought the two copies there and waited 4 days for them to arrive.

Now, what happens after it arrives is just incredible. First, I install it from CD and it takes the same 30min it took to install the pirated version. Then problem was that after it installed, it had to download an "update", which was downloading at 6kb/s (even though everything else on my internet was working at 1mb/s) and took 4hours! I was mad as hell, the pirated version took me 10 times less time from "buying" to "playing". Good thing I didn't buy it online, downloading 10GB at 6kb/s would have been fun.

To make this really hilarious, when my friend tried to install her copy, steam informed her that her key is invalid! Then, for two hours we tried all possible interpretations of the characters and none worked (there was really only one interpretation, but we figured it shouldn't be a problem on steam's side). So, I went to the online support of steam, used a really nice contact sheet with places to put all the info (saying which game it was, which problem, which key, which user, etc) yesterday morning. The problem is that a full day has gone by and I had no answer

I'm really sad that we couldn't play the co-op this weekend as planed, and after this, I get the feeling that something is seriously wrong with the way software is being sold...
10

DC Website Help and Extras / MOVED: Upon uninstalling does it replace my icons?

Description
This program allows you to make a random sequence from either a number range or a file with several entries.
(Read the original request for more detail)

Features
The program works in 2 ways:

It creates a random sequence from the lines of the file. 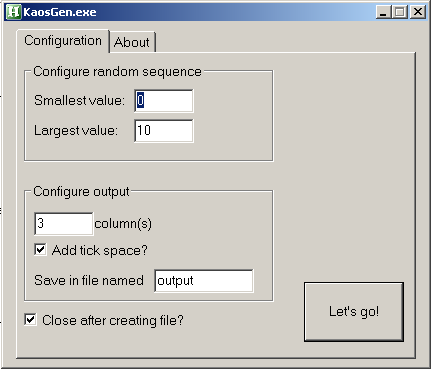 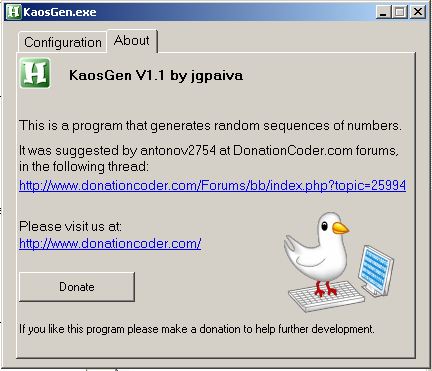 Using the Application
- Double-click the application for use #1, select "General" tab and click "Let's Go!".
- Drag&Drop a text file on to the executable to get a sequence of entries from the file.

Uninstallation
Delete the executable and the config file (KaosGen.ini)

Known Issues
None that I know of

Changelog
v1.2
when canceled due to file existing, return to the main gui

v1.1
added several usability features:
The program should not quit automatically after it finished generation. What if I need several random files?
Please, don't include file extension in the filename field and make the field larger. It is ok to add ".txt" to all names automatically.
If I drag-and-drop a file, the default number of columns should be 1, makes more sense.
The window asking for overwrite sometimes appears behind others. Can you make it stay always on top?
Would be nice if last used settings were saved.
The program does not have any indication of what it does. Try to use words like "random" and "sequence" on the General application page.

fixed bug:
The range of generated numbers is incorrect, lower border (default is 0) is not included in result.

« on: March 08, 2011, 09:21 AM »
So, I need to change GridMove's licensing.
The problem is simple: the current license (Creative Commons Attribution-Noncommercial-Share Alike 3.0) does not work as I expected. It is not aimed at software, and works better with other kinds of works (images, video, etc).

Here's what I was looking for:
GridMove is free for personal use, but for use in a commercial environment, the author must be contacted.

The current license is not clear on the commercial use, as it is aimed at other kinds of works. What it says is that no-one can make money out of GridMove other than me.

So, does anyone have any idea on what is the best way to do it?
Also, is there any problem with me changing the license of a work, or as the owner of the copyright I can do anything I want with it?
15

ProcessTamer / MOVED: use AHK to determine CPU usgae of any given process? 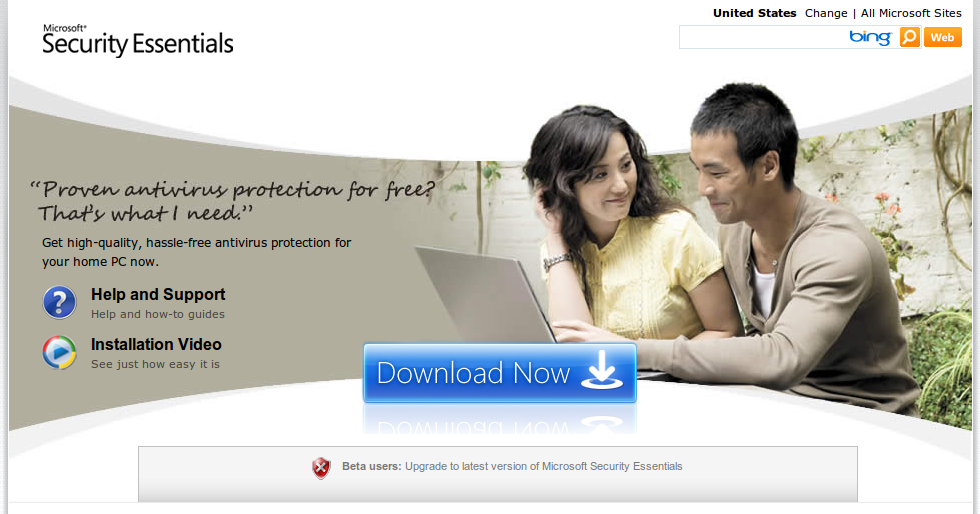 Post New Requests Here / MOVED: DONE: Automatically create a sub folder in a folder on the basis of Album Names

Post New Requests Here / MOVED: DONE: Replace the exact text from the .txts in a folder

Coding Snacks / MOVED: Replce the exact text from the .txts in a folder