General Software Discussion / Re: Which Linux For Non-Techie Windows Users?

I would never put linux on a non-techie machine. No matter how much linux has improved, you need to do some sysadmin... impossible for a non-techie on his own.
-urlwolf (March 10, 2010, 09:22 AM)

I don't agree. Non-techies are not a homogeneous group. There are computer illiterates, who don't even know what is a browser, and who think the "e" is the symbol of internet. And there are those who know one thing or two about computers.

I think linux won't feel different after 5 minutes to the completely ignorant types, for instance those who hold the mouse in a weird fashion.

Those who are somewhat used to windows are a whole other story though. Putting linux boxes in front of them is never a good idea.
402

General Software Discussion / Re: Why the aversion to .NET Frameworks?

This was especially true for 1.1, which was abso-Fing-lutely ridiculously slow. Newer versions feel faster, but I still get that feeling of slowness most java applications give.
403

I have won the lottery in the UK so many times {although I NEVER play any lottery} but just could not bring myself to respond to the "Official" email address like [email protected]
-parkint (February 19, 2010, 07:34 PM)

Yeah, good thing that you did not respond, because commercial domain for UK is .co, not .com
404

General Software Discussion / Re: Which Linux For Non-Techie Windows Users?

XFCE or the like is the way to go apparently, but installing PCLinuxOS, and changing the window manager from KDE to XFCE does not sound like a natural option. Which distros are both reasonably lightweight and reasonably newbie friendly?
405

Good point, sorry I should have been better in defining requirements.

Circles would be nice to have. Triangles would also be fun to have, but I think their utility would not compensate for the extra complications they would impose on the UI.

But I would be content with a decent program that would do only squares and rectangles.
406

Also I need my father (aged 70) to be able to use it, so nothing too technical would be a better choice.

I tried a few like cutlist, but most have clumsy interfaces, and some have their fair share of bugs.

--
Indecision is the key to flexibility. [Brian Schottlander]

General Software Discussion / Re: Firefox --3.5-- Extensions: Your favorite or most useful 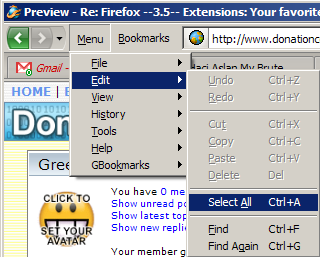 Finished Programs / Re: HotkeyRing - One hotkey to rule all others (with plugin system)! AKA JustEnter

« on: July 28, 2009, 02:39 AM »
Marvellous idea.
I personally know zillions of graphic designers who hate having to cope with different hotkeys for similar tasks in photoshop, illustrator, fireworks etc. I'll tell them just wait a bit for HotkeyRing to mature.
409

General Software Discussion / Re: Top Greasemonkey userscripts that you use

That went on to became an add-on. Yet experimental though:
https://addons.mozilla.org/en-US/firefox/addon/10023

General Software Discussion / Re: Any freeware alternatives to Faststone MaxView?