But I don't believe that Apple's policies constitute violations of anti-trust laws, because, as I said, there is a viable competition. Consumers have the very real and reasonable option of telling Apple "go forth and multiply".

What I'd concede, however, is that jailbreaking is technically a crime (violation of DMCA). That twists the concept of ownership.

So, if I were a US citizen, I'd be demanding the government to fix the intellectual property rights regime for good, instead of interfering in a single firm's policies. The disease is more deep-rooted. Focusing on symptoms won't do much good in the long run.
302

« on: May 02, 2012, 05:08 PM »
But there is a viable competition.
Apple has a dominant market position in only the market for "Apple products". Not in smartphones, not in laptops, not in desktops, and given market trends, not in tablets (at least not for long).
Do you really want government to intervene because Apple has a monopoly in producing iphones or ipads?
Apple is no more dominant in any product category than General Motors is dominant in cars.
But General Motors has a dominant market position in making Cadillacs. Should government intervene to foster competition?
303

« on: May 02, 2012, 04:44 PM »
Mine may be a technically ignorant rant but I don't see how Apple has a dominant position in any market. (OK, yes maybe in the tablets market, but it should be eroding fast, now that competition is really churning out android tablets).

Asking government intervene on Apple's policies is like saying "Daddy, Mike won't let me play with his ball."

The better (and more dignified) stance would be telling Apple (or Mike for that matter), take the gadget (or the ball), and use it for a "thoroughly personal" function.

There are other gadgets (and balls) you know.
304

[Select]
^!v::  ; hotkey to call upload to virustotal.com function (ctrl-alt-v)
; virustotal uploader must be installed at "C:\Program Files\VirusTotalUploader2\VirusTotalUpload2.exe"
{
VirusFile := % gst()   ; assign full path of the selected file to a variable

p.s.: I got the gst() function from someone else's script. I don't remember whom or where though.

I really hate going down the route of opposing all claims made by someone, and I really hate to be rude. But, in turn, please don't make unsubstantiated claims.

Nothing in the source you referred to claims that paid antivirus is in any way better than free ones, and certainly no reference to less signature updates and worse heuristics.
The report for 2011 seems to choose Kaspersky as the best of the bunch, but free ones also had very good scores, and in 2008, it seems Avira, a free solution, was the recipient of the same award.

I respectfully implore you to write a teeny bit more thought of and substantiated claims than a tea party supporter.
307

Why do you want to save money on computer security? I'd bet paying for a good anti-virus solution will save you more money later.
-Tuxman (April 28, 2012, 09:38 AM)

If only there was a way to know that paid antivirus is better than free antivirus.
309

Thanks a ton, wifey managed to fill her gmail account. This will make clean-up much easier.
311

I don't want to be active on that tab. I just want the tab remain open, but not be focused. So it's really more complicated than it seems.

Anyway, the solution to your problem may be the key to mine.
312

« on: April 18, 2012, 05:47 AM »
Nope, that's not my issue. I'll logon manually once in the morning. I want it to remain open afterwards. But the security crazed bankers don't allow the page to remain open if I don't click somewhere on the page every once in a while.
313

There is AutoScriptWriter included in AHK, you can try it without getting too intimate with the syntax.

Anyway, I am also looking for a solution to a problem similar to the one you described:

I would like to open my online banking page, and have it remain open. Bank IT staff being as always cautious for the most idiot in the pack, use JS to enforce some kind of timeout for the page. If only I had some way to automatically click on a link (i.e. check account balance) once every 5 minutes, I'd be able to overcome the timeout.

Uh, I thought the new system was really new (i.e. one week old or so) so that you could give it back and get another one.
316

I wish you rather considered replacing the new unit with one playing all formats you require, rather than converting the files you have. You know, every conversion takes something away quality-wise.

As to your question: WinFF
317

Living Room / Re: JustCloud.com: It's All Lies

General Software Discussion / Re: looking for a replacement for miranda

I'd rather not use a software that requires a library set imported from another OS (i.e. gtk).
By definition, the lightweight gui requirement is not met.

Thanks for the suggestion though.
320

General Software Discussion / looking for a replacement for miranda

« on: March 10, 2012, 10:00 AM »
I use miranda to cater my MSN and GoogleTalk needs. But I must have been getting old, for day by day, the gazillions of options miranda offers look more of annoyances, rather than amusing capabilities and potential. Add on top the new version notifications received each week, and you have a not so happy user.

I know I can turn off new version notifications, but what if there comes an important security bug fix? I wouldn't want to miss it. But instead, the software annoys me each week about a trivial fix regarding gadu gadu, or something with emoticons in ICQ or so.

Anyway, lately miranda began to interfere with alt-tab functioning on my windows. Perhaps it is fixable with some kind of option hidden deep down somewhere. But I no longer have the energy to try.

So I'm shopping for a miranda replacement.

I just want two things:
1. basic googletalk and msn support (no video chat, no file transfer, just plain and simple 15 years old functionality, though I won't refuse a quality software just because it offers a couple of extra features)
2. a lightweight gui

lack of mirandesque maze of options would be a plus.

What would you recommend?
321

General Software Discussion / Re: move all files from all subfolders of a folder into one single folder

You may want your search settings to look like the following: 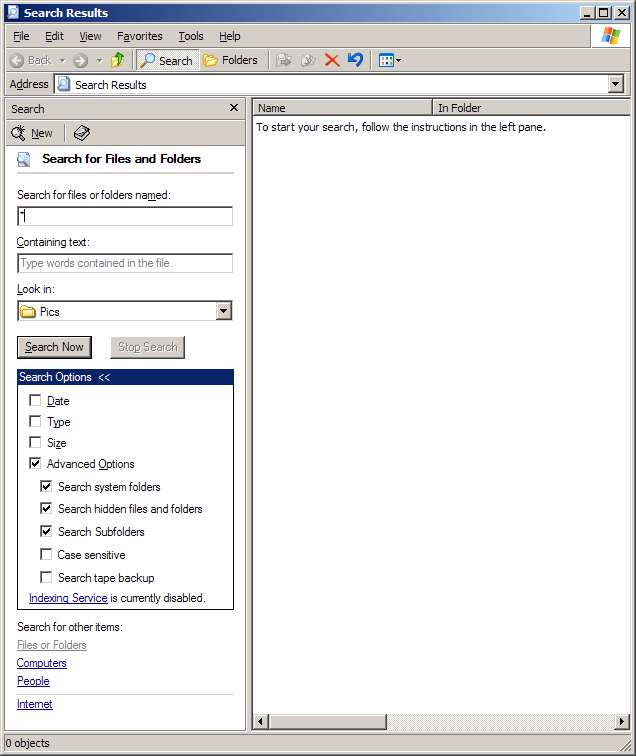 General Software Discussion / Re: No more native Flash for Linux

General Software Discussion / Re: No more native Flash for Linux