« on: March 20, 2014, 05:28 AM »
I actually meant capturing flash videos as they're playing on the user's screen similar to what Free Screen Video Recorder does.

According to the program's site: Free Screen Video Recorder is a compact, yet full-featured screen video recorder and screenshot capture tool that allows you to easily record screen activities and capture anything on the screen including windows, objects, menus, full screen and rectangular regions.

I usually use the FlashGot extension in Firefox to download videos but it's unable to capture embedded flash videos.  Thought I read that you configured SC to record screen videos as they played (as Free Screen Video Recorder does) but maybe I'm mistaking SC for another.
103

Found Deals and Discounts / Re: BitDefender Leap Year Sale - Any Product for $29

Found Deals and Discounts / Re: Free sticky notes app for Windows only on 15th & 16th Jan

Found Deals and Discounts / Re: Ad Muncher End of 2013 sale

« on: December 30, 2013, 10:09 AM »
Adfender is a freeware alternative to both Ad Muncher and Ad Block (Plus).  It's reviewed here.  Both of the latter work for me but what's especially nice about Ad Muncher is that it's global and tech support questions were usually answered promptly.
110

General Software Discussion / Re: Winamp to shut down December 20, 2013. Get the latest version if you want it.

Yeah, that's a useful site to find versions before they became bloatware.

Going to miss Winamp updates.  Have used it since Win95 days.  This thread has morphed into a memorial.
112

« on: December 08, 2013, 05:23 PM »
Whenever I visit a site that purportedly offers free software and it takes longer than a few minutes to figure out how to acquire it, it raises red flags.  For instance, was looking for XYPLORER and looked at least a couple of times but didn't find it and also, there are too many free offers on that site which usually means either jumping through hoops to get it or it's not really free as advertised.
113

Found Deals and Discounts / Re: Genie Timeline Professional 2 for 10USD

« on: October 07, 2013, 02:51 PM »
I managed a 3-PC home network with Cisco Network Magic Pro v. 4.9x.  Just added a fourth cleint, a Thinkpad running Win 7 Pro 64-bit and after installing NM on the laptop, found that Cisco discontinued the program and shut down its sever used to register NM (to elevate the free version to pro).  The free version of NM isn't worth the disk space it occupies so am looking for a NM alternative I can install on all four clients.

Googled "network magic alternative" but found only Spiceworks Desktop as a viable alternative.  Issue is, Spiceworks is not exactly user-friendly and is geared more toward IT professionals, not home network administrators.

File Panes simply shows separate drive details horizontally (as pictured above and/or below) or vertically.  It's especially handy when moving files between drives.

Thanks for the Drive Bar link.  As seen below, I've installed it but didn't read far enough to know if it can be installed as a separate bar as is so easily done in PD.  That's the thing about PD; it's extremely user-friendly as oblivion wrote.  One major gripe about it though is that it sometimes loads slow or incompletely (at least compared with XYplorer) implying that it's a resource hog.

I’d be interested to know if your preference for PowerDesk is just about familiarity, or if it genuinely has acquired functionality or something ergonomic that gives it an edge over the other (increasingly extensive!) non-Microsoft competition.
-oblivion (August 19, 2013, 10:13 AM)

Familiarity has a lot to do with it and have also tried XYplorer but found it still can't match Powerdesk's View>File Panes function and Drivebar toolbar. 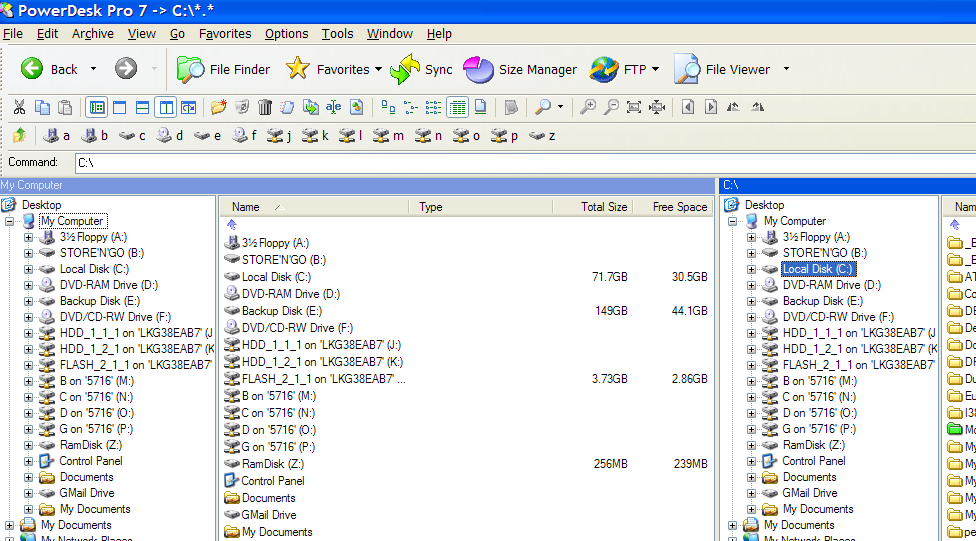 « on: July 23, 2013, 10:06 AM »
Thanks for putting a through date in your title.  All post titles here should include expiration dates to save trouble of finding out the offer expired a long time ago.
121

« on: February 27, 2013, 02:38 PM »
Even though I've selected C:\Users\XXX\Desktop as my location to save screenshots and they are apparently saved there, they don't appear there.

Found Deals and Discounts / Re: Ad Muncher - half off

« on: December 25, 2012, 10:33 AM »
This program is no ad-killer panacea.  Too many still get through and lately, have been having an issue where my browser (FF 17.01) stalls with the URL preview in the lower left corner of the browser window reading, "Connected to interceptedby. admuncher.com ..."

Author had no remedy beyond blaming my browser but he has generally been very responsive to support questions.
125

The email address was given in a comments section at bottom of download page and license code after installation.  This whole give away was setup similar to those offered on http://www.giveawayoftheday.com/.

Experience has been that some of these supposed giveaways expire after a time even though not mentioned in offer.  We shall see, I guess.
Pages: prev • 1 2 3 4 [5] 6 7 8 9 • next
view mobile/wap2 version of this page