« on: March 09, 2010, 06:10 AM »
I can still remember my first steps into Assembler-coding with SMon: [attach=#1][/attach]
The only help I had was a listing of the floppy-rom with some comments. I had no idea what all these instructions could do and flags are used for. I learned each command by trying and observing the results. After loading some code I found new ones to explore. A very funny and exciting time.
78

« on: March 09, 2010, 05:46 AM »
I use several for different tasks.
A very good one is Virtual Drive - but it isn´t free.
Paragon also has a really free CD/DVD-Emulator with a lot of great features like realtime compression: CD-Rom-Emulator V3.0 - I love this company because all of their products are really cool and the most of them are available as free editions.
Daemon-Tools & Alcohol are still top notch programs, but I still miss some features others have.
79

« on: February 25, 2010, 07:50 AM »
Outputs via DOS-interrupts is nowadays outdated and not working any more if you don´t use a VGA-Emulator like DosBox.
Here and here are some examples (at the bottom).
Additional ones are these: Here and here.
All you need is there inside. You only have to mix the file-output and text-input together - so you still have a little thing to do.
81

« on: February 25, 2010, 03:25 AM »
You can write to the data hunks in dlls or exes, but its not so easy to do. You have to take care of the file structure, offsets and pointers. It could be a problem to the program task to write at its own file while running - I think the OS will not allow this (try to delete an .exe while running it in the background).
Viruskillers or other security software will treat these changes as an illegal operation and attack.
Reading and writing to normal text-files is incomparable to the others and much more easier to do.
You seem to need a console application. The listing of the complete content after each new number is for bigger amounts not very nice to look at.
It´s also a little bit strange how to implement a "virtual screen with colors" in a command prompt? Did you try to write to the vga-buffer directly (ASM)?
82

« on: February 18, 2010, 09:27 AM »
I do believe most viruses are created and spreaded by antivirus producers. The amount is too big to make me believe there are hundret thousands of hobby-anarchists with virus-coding expertise out there and other things as written in the linked artikle like the virus design that also shows there are other reasons to virus creators than creating malfunctions, heavy damage or getting personal informations. How is it possible that these companies have the signs and copies of new viruses often hours before it has been spreaded wide ranged? The solutions for new ones are out there faster than light. This is too good to be true.

Nearly all virus signs are collected/created by only a few companies that sell them for money to other antivirus software creators (64-Bit chains, the names and informations how to delete them).

A few weeks ago I´ve seen a report from a hacker convention and one hacker explained a new way for system intrusion to open the full remote computer access. In a following interview he made a big party and told that he already has signed extremely good payed contracts with a lot of "antivirus firms" worldwide to licence his intrusion system. I wonder why?

I know of some programs that enforce false alarms in AV progs. Even by supporting the sourcecode and all possible informations they resisted to include the professional program of a friend in the white list - they expected payment to do so. This is a disturbing behaviour for someone who should be a servant to computer users and hasn´t been called the god of what´s a virus and what isn´t.

The explanation is simple: If there is a market that can create its own reason for existance for financial interest it will be done. There are a lot of examples and lobbies besides antivirus software that do the same in their branch. If there is a way to raise the profit there is no frontier - legal or illegal - for the most companies. You can find these "black sheeps" everywhere in all imaginable industries.

Developer's Corner / Re: Help Me Decide How to Giveaway Some C++ Books Here on DC

« on: February 18, 2010, 07:18 AM »
I have a few books about C++, but nothing from yours. I also could need them because I constantly reread all my books after some time to refresh forgotten knowledge.
85

« on: February 08, 2010, 11:05 AM »
I´ve seen about 10 years ago a young guy who could juggle with 40 tennis balls in a closed room showing some really artistical movements during his performance. This was the most astonishing juggler I´ve seen till now. I haven´t heard anything from him in the following decade - what a pity.
86

Take a few on Alex Roman´s older videos that have the same style.
87

« on: January 13, 2010, 09:35 PM »
I tried some games without boxes. But I don´t like this - and the most of them are not cheaper or have a brutal hardware dependent licencing system that makes changes to other machines or selling them very uncomfortable and sometimes impossible.

Therefore I prefer to buy games in boxes or at least the DVDs with a simple but protecting hull. I love it to dig through my mountains of games and to take a look at the pictures or manuals

- that´s also an important part of the games I´d say. When I think that about 70-80% of the prices is being spend for marketing and distribution I cannot understand why I should pay the same price or even the half for a pure virtual ware that only claims to be in my possession and can hardly be sold afterwards. If the real costs of the producers for development is about 10-20% and I calculate broadminded 5-10% for the hardware and the internet costs for some additional game servers such games should be available at a much cheaper price than they actually are.

The internet distribution is only a trick for the distributors to get more money from selling and I´ll not help them to reach their monetary goals. The big losers are the customers and the developers - they don´t have any advantages from it. The biggest losers are the customers. They have no way to play the games any more if the sellers decide to close their doors (sometimes only to open new ones under a new name freeing from the ballast of the previous company). So your copies are useless and all the spent money is more kinda renting the games for some time. Similar things happened with a big DRM-mp3 portal last year. It closed from one day to another and the honest clients in germany were sitting on DRM-protected music that could not be played or transfered anymore. The only thing was a funny message on the HP saying: We´re sorry for that!

If there will be no games at least in DVD hulls I´ll stop buying new games and concentrate on playing the old ones.
89

Screenshot Captor / Re: Is it possible to capture a RDP (remote desktop) session?

Screenshot Captor / Re: Is it possible to capture a RDP (remote desktop) session?

! I don´t use RDP so I can´t give specific tips, but if you use something like Citrix It´s possible that logging functions are existing.
The only problem is: Recording of remote desktops of other people isn´t allowed without their personal agreement. Running Sniffers and Keyloggers in the background to catch passwords can only be done by government or legitimated controllers from your boss to check for unallowed usage of their systems. This can be a reason to be fired.
Even if you use encryption I want to mention that the used algorithms (RC4 56-max. 128 Bits) of RDP are very poor.
91

Living Room / Re: Birth of an Avatar

« on: January 08, 2010, 03:04 AM »
I´ve seen it in 3D yesterday. With the 3D effects the size of the objects seem normal and not small - that´s happening looking such films in 2D. The film was rather amusing, but I´d say the main focus is not the story - it´s the computer/realtime (mixed) animations. I´ve never seen any similar impressive shown nature scenes anywhere until now. I personally can´t await the new Tron Legacy.
95

« on: January 05, 2010, 11:38 AM »
Salatschleuder english: I translated all texts and also the complete sourcecode comments. You can download it and see a video here.
100

Description
You can read all important things in the readme.txt

Using the Application
Read the readme.txt

Uninstallation
Only delete the files and folder 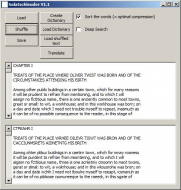 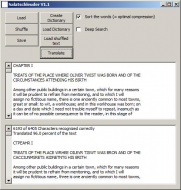