I'll be there virtually. Still a bit too dodgy to travel for me, especially to a con. Hope you have fun!
2

Thanks for bringing Croc to my attention! I've been happily using Woof for a few years for transferring files within my LAN. But this looks like it could be useful as a replacement or supplement to Woof, such as if I need to transfer a file to a remote computer.

Personally, I don't see anything wrong with what ProtonMail did. They followed the law. An argument could be made that the law(s) should be changed. But they complied as they were legally required to do. And if the person of interest had been a little more careful about masking his IP address, ProtonMail would not have had anything useful to give to the authorities.

ProtonMail still didn't give the contents of the emails to the authorities, because they can't! And if you have read through their FAQs, etc., they were always very explicit (at least in English) in saying which info could be gleaned and which info was encrypted/protected from outsiders (which includes ProtonMail).
-Deozaan (September 09, 2021, 04:24 PM)

Oh, I totally agree. What people are up in arms about is the fact that this isn't displayed more prevalently. IMO, if you're going to be doing something where privacy is a need rather than a convenience, you should be reading the terms and such a bit closer in any case.
4

« on: September 09, 2021, 12:10 PM »
I think protonmail is caught between a rock and a hard place with this one. But they aren't prevaricating or obfuscating when asked questions. One hilarious example-

That's from https://www.reddit.c..._protonmail/hbqha63/ and some interesting comms there.
5

General Software Discussion / Re: Question, suspicion of a keylogger

Developer's Corner / Re: Anyone tried the Godot game/graphics library engine?

Developer's Corner / Re: Anyone tried the Godot game/graphics library engine?

Developer's Corner / Re: A decade and a half of instability: The history of Google messaging apps 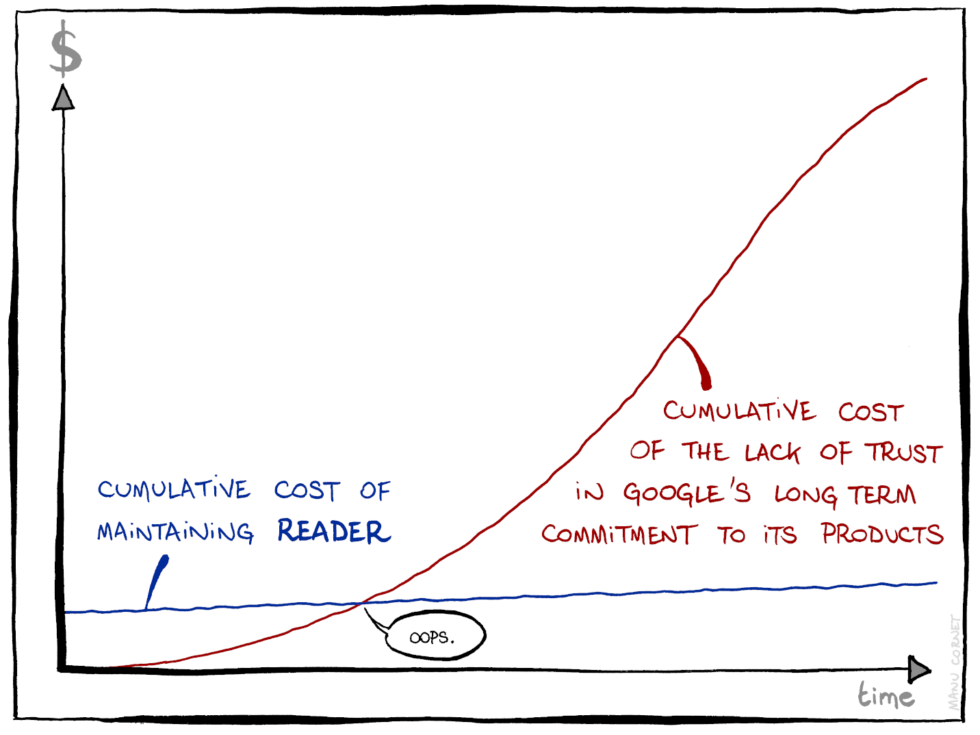 Both are also FOSS.

There are quite a few others that have similar functionality if you go to FDroid and search Notes...

If you're not wanting a list of notes, two others that I use are Markor and iA Writer.
10

I wasn't trying to be prophetic since WinPatrol was a valuable utility for me for years, but it is officially gone, website and all. Users report that it still works, but the learn function no longer does, which means it no longer "learns" whether a startup is allowed or not. I haven't found a suitable alternative

I haven't had to reinstall it yet, but it does still work. It learns from my choices, but yeah, external links are down. Scotty might be long in the tooth at this point, but I still find WinPatrol worthy of being in my kennel.

Ruiware, LLC Overview Ruiware, LLC filed as a Foreign Limited Liability in the State of Florida and is no longer active.

Living Room / Re: About backhaul, overlapping channels, and a lot of other things I didn't know...

Any chance of straddling the fence with Powerline networking? I use it quite often to get out from under a ton of pickle class situations, and it hasn't let me down yet.
-Stoic Joker (July 29, 2021, 05:59 PM)

Ick. I tried that in my house that had basically a faraday cage around my office, and hated it. There are just too many reqs that are based on you knowing the history of the wiring in the house for me to ever fall in love with that option.
14

What's evil is when you have two places in your code where you are essentially repeating yourself, such that if you wanted to improve one version you'd have to remember to also always reproduce your changes in the other branch..
-mouser (July 28, 2021, 05:31 PM)

Yup. That's what I'm talking about above.
15

I'm working on making some legacy code async, and am cringing as I duplicate whole sections of code because whatever stupid idiot made the original thing put a lot of processing in the ctor! And as it is a nuget package used elsewhere in the company by other teams, I have to leave those old methods in.

DC Website Help and Extras / Re: A public thank you to Deozaan and other mods keeping the board spam free

Living Room / Re: About backhaul, overlapping channels, and a lot of other things I didn't know...

If your whole mesh system started to fail without changing anything on your end, it might be because of the neighbor adding things to his WiFi network, started using a microwave close by or you are troubled by other (external) sources of disruptions. It might prove prudent to investigate this further, before investing (heavily ?) in a new WiFi mesh system. Because external disruptions can occur at any given time you can never be really sure that you have "fixed" the mesh part. Remember, when WiFi devices are set to "Auto" with their channel selection, they select the best channel at the moment they are turned on. This does not change anymore and if another device with a static channel is turned back on, both devices won't work properly anymore. Either go full "auto" with every WiFi device in your place and from all your neighbors, or manage it properly by selecting channels 1, 6 or 11 for your own network as well as those from your neighbors. Going "Auto" might sound simpler, but it will always result in a mess. Once you have your and your neighbors channels set up correctly, you will see that the WiFi networks everywhere will work a lot better.
-Shades (July 25, 2021, 11:19 PM)

I'd agree with you, if not for the fact that this is reported several times in relation to NetGear Orbi (and I don't see the complaint anywhere else). And no, because of the size and layout, without doing a lot of work, there's no way to hardwire the house. But thanks for the input- it was more a rant as I saw the same thing continually on the Orbi sites and looking with the same keywords on the Nest hub page, I don't see the same problems (and it has 4x4 instead of 2x2).
19

DC Website Help and Extras / Re: A public thank you to Deozaan and other mods keeping the board spam free

Living Room / About backhaul, overlapping channels, and a lot of other things I didn't know...

We moved a bit ago, and had the same base + 2 satellite hookup, and everything was fine. We had an absolutely ridiculous number of devices hooked up when my wife was running a pandemic pod, and it worked from one end of the house to another, with no drop in speed.

Fast forward to earlier this week. With no change in devices, locations of satellites, or pretty much anything, the satellite in my wife's office stopped giving her good performance. Some times it would just cut out totally. That's when I looked past the good reviews and found something rotten underneath.

Looking into people with the same problem, I found out about backhaul- or the intermediate links in a mesh network. For some reason, mine was always showing as poor now, even though the satellites never changed position. I tried moving them everywhere, and no joy. I tried resyncing, and nothing. I found places that said you had to have your satellites at least 30 feet from each other, and realized from that, maybe my system for the larger house was too much, and dropped a satellite. Nothing. I found out that each satellite actually had a dashboard, and it said it was too far from the base, so I moved it. Then I found places that said you shouldn't have more than two rooms. And about overlapping channels and you shouldn't use auto, you should use 1,6,or 11. And that perhaps someone had a new device, and I should get a wifi sniffer- so I checked Netspot, and tried to analyze and find the best channel for both 2.4 and 5Ghz. I saw there was new firmware- some said don't upgrade, and others said upgrade. I figured I had nothing to lose... so upgraded, and it seemed better.

... for a day. I added back in both satellites, and one has good (most of the time) and the other poor (most of the time)- which is better than both Poor. Looking deeper into the problem, trawling the Netgear boards, and even springing for support, the only thing I found was that this happens with Orbi routers, and no amount of time spent with tech support helps.

yeah i mean if you already have psvr im not sure it makes sense to buy an oculus -- the games and experiences are going to be much smaller and lower powered
and ironically, MORE expensive than their full version brothers on pc and ps4.
-mouser (July 24, 2021, 01:08 PM)

You're probably right, but the more I think about it, the all-in-one is very exciting! I'll keep an eye to see how the landscape of the games available develops.
22

« on: July 24, 2021, 01:04 PM »
That last point is the one that's keeping it in my cart on Amazon. I haven't found anything that really catches my eye. I finally purchased a PSVR because of a few games coming out in rapid succession that I couldn't resist- Iron Man VR, Some really good DLC on Beat Saber, Squadrons, and a couple of others. I've browsed the store for the Quest, and nothing really catches my eye in that way so far.
23

« on: July 24, 2021, 12:55 PM »
I'm glad the PS4 doesn't need beacons. It just uses the external camera as the focusing point for your playable area. As the PS4 is in my living room, the cord has never been much of an issue, unless I just lose track of what I'm doing in the game (usually because of minor vertigo) and get tangled. But I'm warming up to this.
24

I don't know what it takes to set up the PS4 one, but this is pretty easy. You basically just strap it on your face and then trace the open space on your floor to set up your "Guardian boundary" and you can move about freely in VR. Or if you want to be sitting or otherwise stationary, you can do that, too.
-Deozaan (July 24, 2021, 10:45 AM)

Not much, really. It's just that the PS4 is under my account and they don't really play the PS4 other than VR (it's miiine!) so they get me whenever they want to play.
25