The "ScaleMode" bar is not shown completely on ma laptop. (see Attachment).

Screenshot Captor / Re: Too Many Entries in System Settings

And, SSC was always run from the same directory.

Pls. note, that the SSC entries are only shown in the system settings. They are not appearing in the Taskbar themselves.

Screenshot Captor / Too Many Entries in System Settings

« on: April 11, 2016, 05:54 AM »
For some days now, I get that error. SSC worked fine before. I already re-installed SSC, but I still get that error.
Win7-pro 32bit
I'm NOT using a network path in config. After deleting the INI File, it's working again.
I've attached the Windows Problem Report that was automatically generated, and the old ini file
(Why can't I see the attachments?)

Android Apps / Re: Other app ideas based on WhenLast code

Android Apps / Re: Other app ideas based on WhenLast code

« on: March 04, 2015, 01:46 AM »
I have one wish, though it is probably not based on your WhenLast architecture:
I'm one of the rare species of users who switch off their smartphones during night, and sometimes also on daytime.
Additionally, some apps require a reboot to free up memory or really cut their network connection.

Therefore, the power-off-button of my old HTC smartphone was somewhat worn out, i.e. I sometimes needed several approaches to really get the phone off.
So, I searched for an app to shutdown/reboot the phone, but I didn't find any (at least, not for an un-rooted device).

Maybe, this is a challenge for you: providing a shutdown/reboot app which works on normal devices (not rooted).
I don't know, whether this is possible at all. It's just a wish. 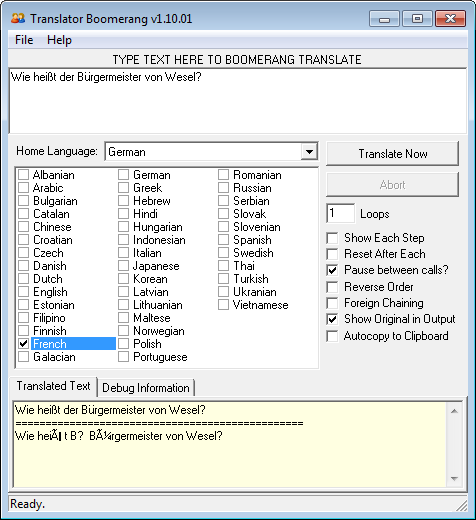 Finished Programs / Re: DONE: Tool that lists digitally signed files from a folder/disk

Mini-Reviews by Members / Re: ProjectSend

Living Room / Re: A good gift for a 10yr old: Wreck This Journal

« on: May 12, 2014, 10:53 AM »
I gave that book to a friend of mine whose sons are in puberty. Esp. the younger one is totally keen on that book and enjoys doing the weird things. However, when his brother accidentally poured some beverage over the book, he was totally upset "Hey what are you doing with the book" and so...

« on: April 28, 2014, 11:46 AM »
Though this thread is rather old, I would like to "re-open" it, because I'm experiencing the same with Windows 8.1
With default settings, I get the frame around the active window shot (Screenshot 1)
When de-activating all Options under Preferences-->Windows Capture 1/2, I get the Windows Vista/7 window close "X", not the Metro one (shot 2).
Using another screenshot tool (yes I confess), I get a proper image (shot 3).

What are the correct settings?????

Living Room / Re: A good gift for a 10yr old: Wreck This Journal

« on: March 19, 2012, 08:39 AM »
BTW, you can always insert a cursor afterwards by using the editing features of SSC.
The Clipart directory has a subdirectory 1\Cursors where all common cursors can be found.

Screenshot Captor / Re: Some help needed with ScreenShotCaptor

« on: March 15, 2012, 07:15 AM »
When the red frame appears, it tells you what Window Object you chose, for example "MozillaWindowClass" if Firefox had the focus, or "ConsoleWindowClass", if it is a command prompt window. So be sure to select the proper object.
Then, use Ctrl-click. A menu should appear asking what to do. Option "3" will start auto-scrolling and capturing that object (after asking for additional options).

Today, I discovered FARR, and I have to say: this is a very cool program. (And the screencasts are great, too).
Thanks very much for this valuable helper.