In what language is pdGet written? I hope it is not JavaScript.
3

« on: November 19, 2021, 07:17 PM »
Any news about this one? Any test versions to download? By the way youtube-dl is most likely abandoned for good so I suppose replacing it with yt-dlp, the most actively maintained and popular fork would be a good idea.
4

Installed Tray Weather and received an API key free of charge.  Not as user-friendly as sWeather was and don't quite understand why the key was necessary but the program offers a lot of data and can't beat the price.
-Midnight Rambler (October 12, 2021, 11:55 AM)

I checked Weather Bar and its Source Code and it turned out that the program is JavaScript/Electron and I do not use such stuff.
6 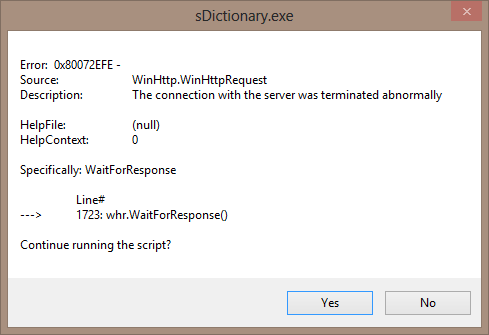 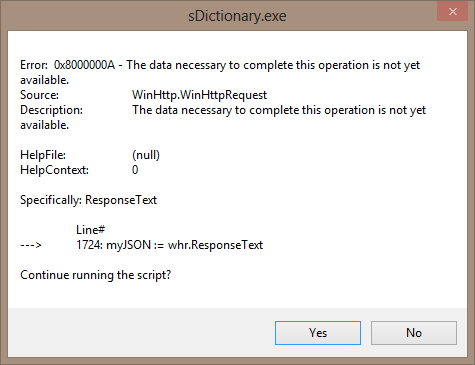 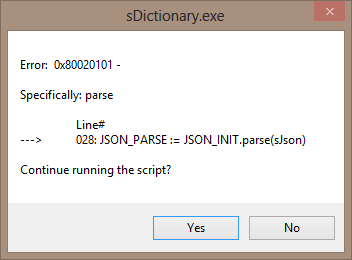 This happens on Windows 8 x64 and I do not know where the problem lies- in my system, in sDictionary or in Merriram-Webster Collegiate Dictionary website.
7

« on: June 10, 2021, 05:09 PM »
I had been using WeatherMate for years until I discovered sWeather which is the best weather program I have ever used. When I noticed that sWeather had stopped working I came back to WeatherMate only to discover that it was no longer working either. I contacted the developer- Ravi Bhavnani, who responded that he was working on a fix. So being deprived of my two weather programs which had been for the most part reliable, I started searching for alternatives. I came upon Tray Weather, which is open source and written in C++ but not portable and without reading the description I installed it only to find out that one needed to get an API key from OpenWeatherMap. After having a look at their Privacy Policy I decided that I didn't want their key and that Tray Weather was not for me so I uninstalled it without even testing it (at first glance I saw that it was bulky, it was not portable, it was limited). After researching some other alternatives which are not even worth mentioning I concluded that for the time being there is no real good alternative to sWeather and that I would have to rely on the inconvenience of web services like wttr.in (GitHub) which at least seamingly do not abuse user privacy (if such a beast has ever existed). If sWeather adopts OpenWeatherMap API I will have to ditch it. If someone has discovered a decent alternative to sWeather I would be grateful if they share their finding. On a side note I want to mention that Yahoo is really fabulous and proverbial- it ruined, burned and destroyed all the assets it once had.
8

« on: February 05, 2020, 04:56 AM »
Below I will post about version number discrepancies in latest versions of Screenshot Captor. 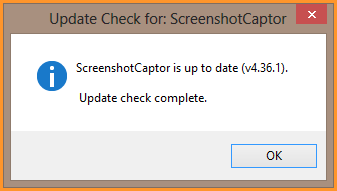 The version from 2020-01-02 was supposed to be 4.36.1. I think that there was even another release in between but I may be wrong. These version number discrepancies are not a new phenomenon, this has happened quite often before with many of Mouser's programs. As a result I am never sure which is the latest version of a certain program. In my humble opinion Mouser is a very good programmer but when it comes to versioning he is very negligent. This is not a complaint but just an observation. The ideal situation would be if website, file version (both installer and executable), about and update check show the same version number but I am afraid that this would be too much for Mouser.
10

@smaragdus - See what I mean?

I absolutely do not care about false positives. I still use an antivirus for a single reason- when I update some programs they insist on integrating to Windows shell and my antivirus asks me whether to allow or block shell integration. Blocking shell integration when updating certain programs spares me some time and efforts as I would not need to open and edit the Windows registry. Anyway, for me common sense has always been better than the best antivirus, actually it seems that all the antivirus programs are pretty shitty.

By the way- do you still accept feature requests for TextWorx?

I think I will remove that last function in the next version just so it doesn't set off alarms.

I do not think that it is wise to remove features because of a shitty antivirus and its false positives.
12

« on: December 26, 2019, 07:11 AM »
Nowadays modern science has become a politically correct religion. As a religion science is rather inferior. Modern science has nothing to do with seeking for truth, it is just a tool used by the globalist elites to suppress truth and to indoctrinate society into politically correct lies. If science means to be a brainless and godless idiot I prefer to have nothing in common with science.
13

Mini-Reviews by Members / Re: Review of Ethervane Echo

Mini-Reviews by Members / Re: Review of Ethervane Echo

I see it does not remember the size of the thumbnail strip, is that what you are talking about?

Yes, the thumbnails become very big. The only workaround I could find to restore the thumbnails size was to delete settings file ('MousersMediaBrowser.ini').

It will auto add folders to the GoTo menu as you use them..

I am not sure I understand how to use 'GoTo' - I have browsed many folders containing image files and 'GoTo' menu is always inaccessible (Windows 8 here).
16

This Systemus looks cute. I would like to test it under Windows 8 when there is a test build released. In what language is it written?
17

Feedbro is available on Chrome Web Store. I once tested it with a Chromium fork but I prefer desktop RSS readers.

By the way, is Paste Text Like abandoned for good?

First- I am glad that Mouser's Media Browser is still in development. I tested version 1.15.01 and I think I foumd a bug when switching between view modes, example:

If needed I can apply screen shots.

I will repeat some of the suggestions I made earlier (here):


I work regularly with animated images (mostly APNG) and support for animated GIF and APNG files is essential to me, examples: When I start TextWorx (version 0.7) and try to execute Win+K I get the following error:

[Select]
Error:  Menu does not exist.

The current thread will exit.
Screen: 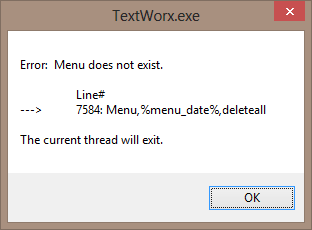 This happens under Windows 8 x64.

Is there a way to change the default shortcut keys?
20

Living Room / Re: I'm getting married, wish me luck!

Best wishes to the newly married couple! I wish Mrs and Mr Mouser much joy, happiness and love! May good luck always be with you!

Living Room / Re: I'm getting married, wish me luck!

Excuse my ignorance but who is Cody?
Pages: [1] 2 3 • next
view mobile/wap2 version of this page