A utility called Ghostpress that purports to break low-level hooks any keyloggers might try to establish. Is it legitimate software? The admins at oldergeeks.com say it is...
2

« on: November 24, 2019, 04:12 PM »
I have an author friend who wants his Wordpress site revamped. Don't know full scope of changes desired.
Anyone know of anyone qualified and interested. If I can collect names/emails, I'll put the author in touch.
3

« on: June 01, 2019, 06:46 PM »
My stepdaughter is starting the University of Kentucky this Fall and will be in a Civil Engineering program. She is required to have an i5 or i7 laptop, minimum 16 GB ram, 2.8GHz or faster processor, and Win 10 Pro/Enterprise/or Educational. If it supports a discrete or add-in graphics card, that's a plus. Can anyone recommend a good deal. We want to get her a machine that suffices, but we don't want to pay through the nose any more than we have to...
5

« on: March 08, 2019, 06:23 PM »
I've been working on a unique roleplaying game. I'll link to the in-progress PDF below (note: hasn't been finished, nor formatted for easiest possible reading). I either want a player/players able to post almost daily on rpol.net or who could manage 60-90 minute session once weekly on rolz.org

Living Room / Blades in the Dark

Looks intriguing. I think the mechanics could lend themselves to a strategic RPG game.
7

Thought I'd post this link to a small utility I wrote this week. Having quit using LastPass due to concerns, and not wanting to trust other freeware password keepers, I rolled my own.

« on: January 19, 2019, 09:39 PM »
A small utility (25 Kb) program written in C#. MyRolodex allows you to pair a key (enter some unique string) with associated string data and save securely to file in an encrypted format. If you choose not to password a particular pairing, you won't have to enter a password to view it but it still will only be viewable using this utility. If you do password a saved pair, the utility will require you to enter its associated password before it will display the data.

Note that regardless of whether you password a particular pair, the file it is saved in is encrypted with a simple string encryption algorithm.

Files created by this program are saved in the current user's AppData\Roaming\MyRolodex directory.

« on: January 11, 2019, 08:05 AM »
I'm working on a game written in C# called Earth Apotheosis. At first it was going to be a living card game, but now I've decided that that will be a feature in the game: collectible cards that have various powers (think MTG blended with the cards in Zelazny's "Amber" series).

Painted in broad strokes, the game will contain the following elements:


Expansions may provide any combination of the following:


You can manually create your character, or allow the game to generate it. There are five races you may choose from when creating your character:


An overarching theme prevalent throughout  gameplay over an extended period of time is that of putting clues together about past ages of the world and why the world is as it is today. But it is optional whether the character digs into this theme via exploration and discovery coupled with taking skills that aid these activities.

Your character has a finite lifetime but there are ways to extend it, and possibly even stave off death indefinitely.

There will be a mechanism for players' characters to exchange/buy/sell items via in-game shops, bazaars, fences, etc.
10

Living Room / Working on a DCTCG and found this resource

« on: October 25, 2018, 07:44 PM »
I'm working on a digital collectible/trading-card game and found the following resource while researching. It's a site that facilitates developing your own card game:

« on: September 21, 2018, 05:56 PM »
I have quoted a C# source code file that compiles fine. It runs a server on my local machine and listens for a connection. As the screenshot shows, I can connect to it successfully via telnet. However, the server is responding to each individual character I type in telnet, rather than waiting until I type a word or sentence and press Enter while in telnet. I know this has to be an easy fix, but I'm foggy right now.

The behaviors I'm looking for is for the server to receive multi-word phrases and echo them to the console. See source code and also the screenshot. I want to be able to type "quit" from telnet and have the server respond to that word, rather than each character.

Purpose: The cpg.exe program is a Windows command-line program that I developed because for several weeks now I've been writing a series of C# Console Programming tutorials on my local DokuWiki. Over the weeks, I've developed a pair of libraries, ioLibrary.cs and stringLibrary.cs, that I use frequently, almost with every new console program I create to illustrate a concept or test a new method. It became laborious  copying the two libraries' response files to the new program's directory each time, creating a custom response file for the new program itself, and creating a batch file to call all three three response files against the csc.exe command line compiler. Thus cpg.exe was created to automate all of that.

It's very handy for me, personally. If anyone would like, I can further develop it so that it is library-agnostic and creates the simplest possible console program.

Unzip the download, and place folder csdev at the root of C:\. Open an elevated command prompt in the same directory (or open the elevated prompt and navigate to cpg.exe).
cpg.exe is located in the /tools/ subdirectory. Run cpg.exe (stands for console program generator) and it will show you the use of its command-line syntax. Requires .NET Runtime.

Basically, the app is a Console Program Generator (hence, cpg.exe). When you run it and supply a path/to/desired/directory/mypreferredfilename
as a argument, it will create a C# console source code file at the specified location and will compile it.

Here's a screen shot of an executing test console app generated by cpg.exe:

The download should be extracted to your root drive on a Windows PC, i.e., C:\

That's where you should locate the /csdev/ folder after unzipping. Hey, I didn't know when I started this that I'd be sharing it,
so it's not very flexible as I coded it for my own use.

Currently, the program copies a couple of DLL libraries I wrote to the new source code file's directory. The library source code is included in the download. Also, when cpg.exe writes the source
to c:\what\ever\path\filename, it inserts the relevant using statements (equivalent of C++ includes), creates needed response files,and generates a batch file to make repetitive command line builds fast. The cpg program itself has had ioLib.dll and strLib.dll merged with its own assembly via ILMerge tool.

« on: September 11, 2018, 05:03 PM »
I've been writing many small console programs via the command-line C# compiler. My question is: is there any particular reason why I shouldn't use the -nowin32manifest switch when compiling? It makes the .exe smaller, but is there a downside for me? Remember these are just handy little programs I use myself or have written to illustrate some concept. Nothing commercial or anything.
14

« on: September 03, 2018, 05:25 PM »
So, for the last few weeks I've been writing a book (via my private DokuWiki and simultaneously in .epub and .prc formats) about some of the things I've learned to do with C# over the last decade. I'm at a place in the book where I show how to capture output from some other process that is initiated by my C# app. I'm looking for a couple of Windows command-line programs that are complex enough to yield data not just-as-easily-derived by the calling application. It's okay if the C# app needs to do some string parsing, etc., with the returned data. I'm just wanting to give a good example of not re-inventing the wheel.
15

Also, anyone else use 3uTools on Windows to manage iPhone storage? ClamWin thinks it contains a worm and a trojan agent.
16

General Software Discussion / How secure is a private WordPress post from public view?

« on: July 06, 2018, 04:25 PM »
I understand from the documentation that even if someone guessed the URL to a private WordPress post, they still couldn't view it. Is that strictly true? How vulnerable are private posts to, say, a WordPress site using say a typical security plug-in like Wordfence?
17

« on: June 18, 2018, 11:54 AM »
I have my WordPress site set so that it shares my posts to FaceBook and other social sites. Is there a way (perhaps a plug-in, or a post option I've overlooked) to selectively choose NOT to have a given post shared to these other sites?
18

The first is a free CLI tool built on top of jsNode that can encrypt one or more HTML pages, requiring a password to open them. I know this exists but can't remember the name of the tool.

The other I'm looking for is software that switches the Desktop wallpaper among images in a folder (in sequence or randomly) at user-selectable intervals. I think someone coded this for one of the N.A.N.Y.s, but I can't recall the user or name of the program.
19 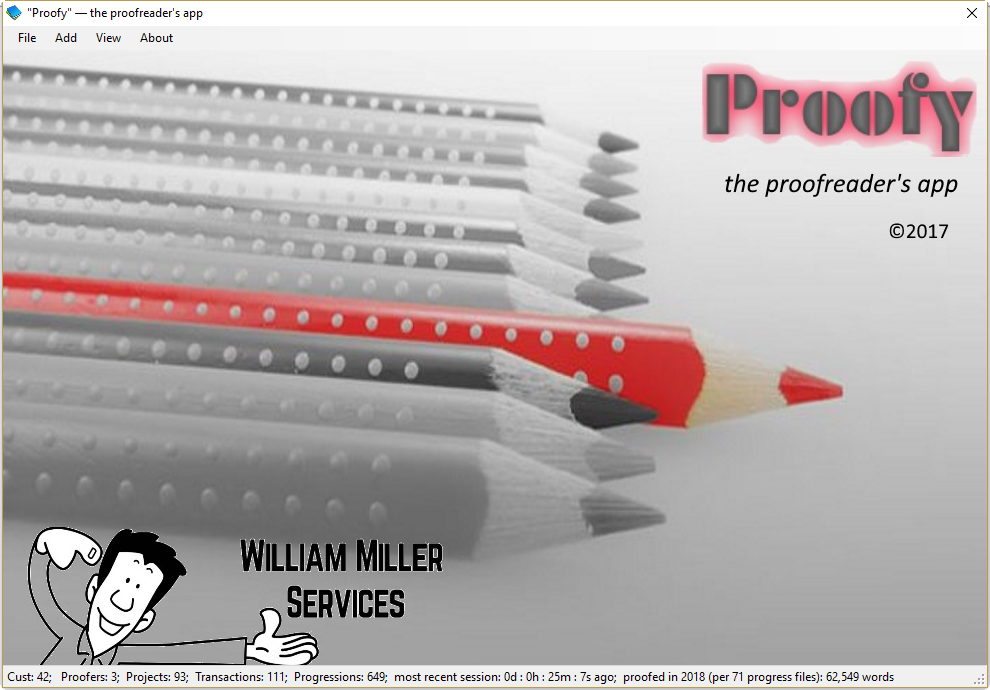 Note: if you screw around with, or lose, any of the images in the /Images/ subfolder, Proofy will grumble and grind. You may therefore want to be sure not to lose the download containing those images.

Doesn't yet have a Help system but I've been using it successfully from project inception to completion for the past several weeks.

Alert to those who've downloaded past distributions: distros 1-8 have been superseded by #9.

« on: September 06, 2016, 05:31 PM »
I have a HP Pavilion 17-g121wm laptop that says it's in Airplane mode but in actuality wireless is connected to internet. I can't get Airplane mode to actually work. The following screenshot shows Airplane mode ON and Wireless greyed out, yet I am connected the internet and posting this. In Settings, I try to toggle the Airplane mode toggle without success. It's stuck in the ON position. Again, though, the PC is not truly in airplane mode. I'm connected. I tried uninstalling my network adapter and rebooting. That didn't fix the problem. Tried an HP driver for my fn-F12 airplane key. No dice.

« on: August 30, 2016, 04:25 PM »
I'm looking for a black and white printer for a daughter. She's a college student with a chromebook. I want either direct usb connection or bluetooth, the simpler the better. So she can just connect, print her college papers, and be done. Needs to be something she can carry in the back seat of her car.
23

« on: August 07, 2016, 02:56 PM »
A buddy of mine, Tom, has a really excellent idea for a website but needs a competent PHP/MySQL programmer. It requires an NDA to be privy to the details, but I've seen his presentation and I'm sold on the idea. If anyone on here fits that description, you can reach Tom at [email protected], or on FB at https://www.facebook.com/AZPiR8King
24

Looks pretty nifty. I've downloaded it and am playing with it. It's 2D animation software.
25