You may not use this tool to make flipbooks to sell; contact OpenAirPhotoBooth.com for a commercial license.

May we recommend..
Screenshot Captor 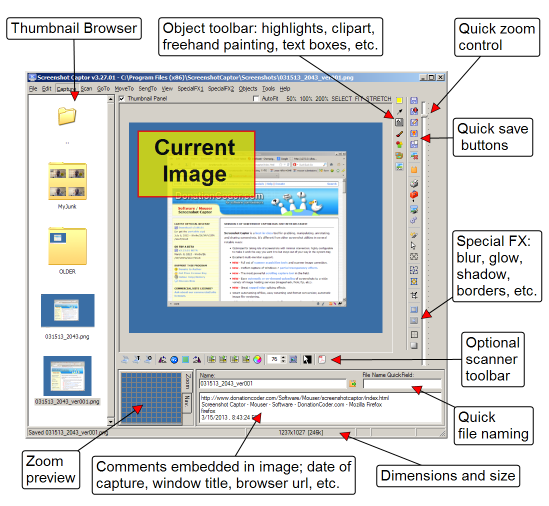 Screenshot Captor is our most well-known tool. A best-in-class tool for grabbing, manipulating, annotating, and sharing screenshots. It's different from other screenshot utilities in several notable ways...

Screenshot Captor is our most well-known tool. A best-in-class tool for grabbing, manipulating, annotating, and sharing screenshots. It's different from other screenshot utilities in several notable ways...

FlipSuite's development was funded by the company that now owns the commercial rights to the software, and they have generously allowed us to continue to distribute a fully functional free version.

Commercial Use of FlipSuite and Flipbook Printer?

Please note that without a commercial license a small text message is displayed on the far left border of printed flipbooks that states it may not be used commercially.

You may not use this tool to make flipbooks to sell; contact OpenAirPhotoBooth.com for a commercial license.

What was the inspiration for Flipbook Printer?

We used to draw our own flipbooks when we were kids but I had long since forgotten about them until 1999 when my mother and I stumbled onto a showing of Masters Students work at the Krannert Art Museum at the University of Illinois at Urbana Champaign. Most of the projects there were awful things like a giant pile of broken glass, but one of the Masters projects was a display by a woman named Stephanie Ognar. It was basically a set of flipbooks hanging by strings, each one with a short movie consisting of things like her putting on a winter jacket, blowing a kiss, etc. Very very simple idea, but somehow surprising and magical and whimsical. Somehow it felt like I was holding a little piece of history frozen in time. It was a zen-like reminder of how amazing it is that we can capture moving events. Maybe it's just the unexpected shock of seeing a "movie" on paper. Anyway, we were captivated by that display and I've wanted to make a tool to help people make these books for many years. If you're interested in flipbooks as art, you might like to know that other artists are also involved in flipbook work. Please let us know if you use our program in a project!

History: Flipbook Printer was created in February 2005, and first released to the public for home/personal use in November 2005, when it was featured in Lifehacker, BoingBoing, and Make magazine. 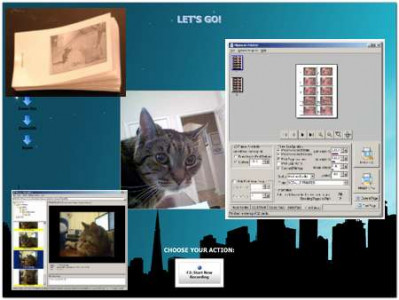 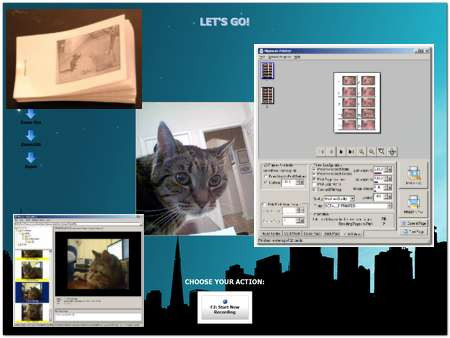