www.Patreon.com/publicdomain page you may otherwise miss.

Some may be more relevant than others, yet they're all related to our software/service/product hence the matching section

Feel free to make questions about them!

Like mouser noted (here), I am "a real person making a real unique post telling our members about a project you are involved with."

Emits source code in the native language of the target platform for "expected format" compilation i.e. exe on windows, apk on android, etc.

It may re-use building blocks from a solution such as Haxe or a brand-new transpiler can also be done from scratch via ANTLR + StringTemplate.

The idea being to use a native technology for the target platform at all times; using their flagship language(s) preferably:

The core of the functions would be written using platform-neutral instructions while the GUI part would be specific to each target platform.

With handy platform-neutral ways + specific GUI functionality you can have the best of both worlds across as many platforms as the industry evolves to use.

Actually, some times I wonder how much interest/support would such future-proof-oriented transpilers gather for ensuring code longevity across platforms.

Some programs are basically the same as they were decades ago! (Think in terms of the same buttons, windows, dialogs, text labels, et cetera).

These programs are basically forced to being re-coded to keep on with the current/new operating systems' way, even if there is not a single improvement in functionality(!).

i.e. I recall doing some VB6 => VB.NET conversion for an Aussie fellow maintaining the exact same functionality. Just because of a 32-bit to 64-bit requirement.

We could simply update the transpiler to support emitting new code for the "popular platform of the day", keeping the original programs fresh-looking and current for longer periods than bound to a particular single technology/framework/compiler/operating system's ways

EDIT: not to mention reaching more target platforms with the same code given many platforms share the same foundations, which can be a big plus on itself.

The rules of the service are rather simple:

All transactions are made in the open for full transparency.

You can always open a new thread if you have a coding snack in mind you'd like programmed using this service.

Again, both new and existing threads are welcome for us to to engage.

As I've been invited to join N.A.N.Y. 2020 by mouser (thank you!) I would like to use this opportunity to ask if you guys have a program bigger than a "snack" you would like me to code?

My aim is being of most service to the community so if you have an idea for a medium-sized program you'd like to have implemented, feel free to shoot it below

While the core of development will be done in December; November is still young so you're invited to make suggestions at ease. Windows/Linux is OK.

Is there an official DonationCoder icon for use in our programs when linking to the site in the Help/About menu?

Can we simply include the site's Favicon? ( https://www.donation...oder.com/favicon.ico )

Many thanks for the info! 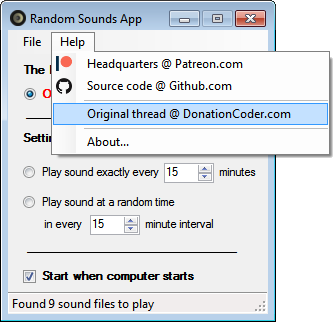