« on: January 10, 2007, 11:50 PM »
I'm really sorry.  I have no idea why it would attempt to connect to the internet.  I never had that problem when I ran the program, and I've run the program on a computer that had an internet connection as well as one that didn't, both of which had the Windows firewall enabled.  I never received any errors.  Since I'm not a very experienced programmer, the only thing I can come up with is that, maybe, the program uses some feature to which you have an outdated version, and it was attempting to update (but I honestly, highly doubt that; it was just the best explanation I could come up with).
2

« on: December 23, 2006, 10:44 PM »
This is a subliminal messaging application.  It displays an image and/or text on the screen at user specified intervals.  It's pretty simple and self-explanatory. 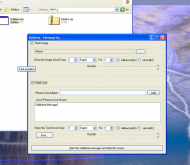 Living Room / Re: What present should we get Cody for xmas?

« on: December 13, 2006, 02:16 AM »
I have a debatably useless VB project app I'm working on for a friend.  I'm not an experienced programmer, so I won't vouch for it's quality; since I will be making it anyway, I could most likely submit it by that date.
Pages: [1]
view mobile/wap2 version of this page