Living Room / Re: There is something 'sinister' going on here

this is a well known problem with IE.
228 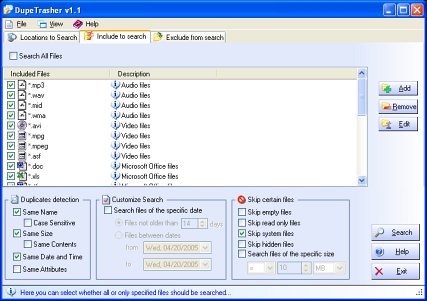 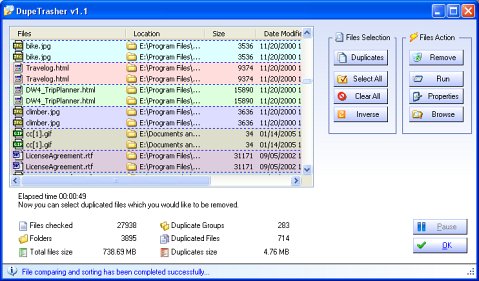 Yet another duplicate file scanner?
We think it's not, but this is up to you to decide. From our experience, some very popular software packages have this option in their features set, but it's has rather poor design. They tend to completely hang or even crash the system when large number of files are included into search. Of course we are not going to name any of those applications here. Advanced algorithm combined with the raw power of assembly language gives you the fastest duplicate file finder on the market, as far as we know. This is not just a cliché sentence, until today we were unable to find some other utility of this kind that is faster, more optimized and lower memory consumer than DupeTrasher. This is especially true when it comes to a search of the large number of files. However, if you prove us wrong and find such application, please let us know, we will give you DupeTrasher license for free!

Technical details
DupeTrasher was written completely in Win32 assembly, as a standalone executable file with no third party libraries or DLL dependencies. Program size is only about 130kb and no compression has been used. It was designed to run on the Windows 98/ME/2000/XP/2003. Smart application crash system is implemented, in order to give you ability to report us any bug that may arise.
229

try Minimizer-XP or your other favorite Minimize to Tray freeware/applications, once minimize to tray all of them will stop flashing.

Living Room / Re: What do you do at Donation Coder?

* Prevent spyware and pop-ups
*
Avoid viruses and worms
* Surf the internet without a trace of unwanted cookies, internet history and intrusive cyberjunk
* Install and use trialware, shareware or games and discard with a simple reboot
* Multiple Users - restore your PC after other users on your computer have made unwanted changes
* Windows support for 2000 and XP

ShadowSurfer ShadowMode™ provides a safe computing environment by creating a virtual twin of your PC. Restore the pre-ShadowMode state of your computer no matter what changes have occurred.
==========================
it costs US29.95, but it's free now:

- wont work for trialware that require reboot, becoz after a reboot it's all gone.

- i will keep it as reboot is much faster than making a new image with TI.
233

split into 8 pages. this is really simple but.... not elegant.

General Software Discussion / Re: something to save file/program/icon associations

if you want something like that, winpatrol is free:
http://www.winpatrol.com/filetype.html
238

i like the ability to boot into the snapshots, we can create 10 snapshots max so it is like we have 10 different partitions to boot into.

and that forum points to a different software company, not Raxco:
http://www.leapfrogsoftware.com/

Don't kick yourself for missing a single goal.

* Stay up to date with the latest scores, see videos of the best goals, and talk about the 2006 World Cup with fellow fans.
* Downloads in minutes, installs in seconds, and keeps all your existing bookmarks and settings
* Get all the football action you can handle using Firefox's tabbed browsing and integrated search.
* Show support for your favorite team by changing the browser's look and feel.
244

General Software Discussion / Re: soft and hard links in ntfs

Post New Requests Here / Re: IDEA:Get all entries in windows regedit about an element via the contextual

i use Registry Workshop, a shareware, it can search thru the registry and display all the match occurrences at once, i dont think the search result can be exported to a txt file and also cant access via the context menu, but it has some very powerful features.

another one is Registry Explorer, freeware. i havent tried this one tho.
246

Post New Requests Here / Re: IDEA:Get all entrys in windows regedit about an element via the contextual menu

something to save file/program/icon associations
247

Post New Requests Here / Re: IDEA: copy a row or column from an html table on a web page

General Software Discussion / Re: Great little app for sharing/transferring files to others (or yourself?)