However, I have encountered a problem with it. Each time I use it to make a window fullscreen, it makes my CPU utilization go up to 100% and doesn't really fall back down even when I close the program or the window I'm using. I have a dual-core CPU so it seems to be making the fullscreen window use up 50% of the CPU and then Explorer.exe takes the other 50% of the CPU. I had to restart Explorer in order to bring the CPU back down. I'm on Vista 32-bit and I tested it out using Microsoft Word, Notepad, and Calculator.

Skrommel, do you have the same problem? Do you have an idea of how they made the fullscreen windows larger than the monitor size?
102

I don't know if I can get Autodesk Inventor to display it like in your OP because of that crashing issue. I think we should get Skrommel in on this and see if he has any ideas that can help. Perhaps we could make the static image click through to the original application?

Also, can you post a screenshot of Autodesk Inventor with all the toolbars hidden and try to get the window you want to display as large as you can? 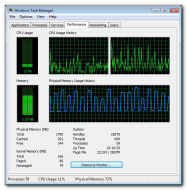 Attached is the modified version of the memory stressor tool I posted above. I have made it so that this version is able to consume both virtual and physical memory at the same time. I have also changed it so that it consumes between 50%-100% of the available memory, which I think is more relevant for stress testing applications.

It is still command line based. Usage is the same as before. Use the Windows CMD window to run it.

I have tested the program on my computer with about 2GB of ram. The results are shown in the screenshots above. Note the sinusoidal-like pattern of the memory usage in the Task Manager.

Note that I'm not sure what the program will do if you have more than 2GB of ram on your system and the program itself tries to consume more than 2GB of memory. There is a limit to the amount of physical memory the program can access on a 32-bit system so the memory stressor tool itself may shutdown if it runs into this memory limitation. However, I think it is unlikely you will run into this bug on a 32-bit system. It should run fine on a 64-bit system and should be able to access all the physical memory since there is a larger memory address space in 64-bit.

I wasn't able to find a memory stressor tool that would work for application testing. There were too many memory error checking tools listed on Google that made the search results useless. Perhaps someone knows of an already built tool that can do what the attached program does?

« on: October 08, 2008, 01:21 PM »
(1) and (3): Drag and drop the icons onto the dock and they will be added. However, for virtual folders such as My Computer and the Recycle Bin, you have to make shortcuts to them first and drag those onto the dock instead. See http://circledock.wikidot.com/help-faq for details on this. In a future version, you will be able to drag and drop all icons.

(2) There is an option in the settings panel -> Dock Items that you can check to make the dock disappear when you execute something from the dock.
107

« on: October 08, 2008, 01:17 PM »
First, can you add an option to keep the dock and icons from disappearing? I don't want to have to mouse toggle, or move the mouse to the edge of the screen every time I start to do something. I don't want it to stay on top of other windows, just not disappear from the desktop. Besides my mouse tray is crooked, and the mouse runs toward the start button every time I let it go.


Second, I have been trying to find a way to get my dock to look like the icons were orbiting empty space, no circle or background. As seen in the pic, from this other pos

Go to the settings panel -> Background -> Normal Opacity and set it to zero and there will be no background.
108

So it looks like this pretty much just eats virtual memory. Is there something that will eat up "physical" memory?
-Notok (October 06, 2008, 11:25 AM)

Hmm, there should be something else out there that could stress both the virtual and physical memory. I'll do a search.

If nothing else, I could just modify that C# stressor tool so that it repeatedly loads an image into memory. That will eat up your ram quick! I had to put in a check for Custom Desktop Logo when I wrote it so that it wouldn't eat up all your system memory if the user tried to load a whole bunch of images into memory so I know it's easily doable.
109

« on: October 07, 2008, 06:23 AM »
That looks like a sweet app and it's built using VB.net too so I can understand the code too! Well, at least be able to read through the code. Perhaps you could try sending the author of that application an e-mail and see if he's still interested in making updates?
110

This sounds quite similar to what SVN type software do since programmers use it to check out parts of a project and later upload it to the managing server so it can be synched. SVN keeps track of all the changes that happen inside a folder and what gets created or deleted. When you check the part of the project back in to the server, just the changes are recorded. A side benefit of SVN is that you get a history of your files at points in time since it keeps track of changes.
111

« on: October 06, 2008, 08:33 AM »
Cool! I just hope people test Window Extractor out before using it for presentations or they may find out that some programs don't like having their elements extracted.

I left a note on Martin's page just in case and noted that they can try out Present This Window instead, which doesn't have the risk of crashing.
113

« on: October 06, 2008, 12:27 AM »
Hello,
Thanks for the translation. I see that you are using an older version of Circle Dock. Someone has already made a traditional Chinese translation for Circle Dock 0.9.2 Alpha 8 but I don't read Chinese that well so it's always good to have a second translation. I recommend you get the newer version of Circle Dock because it fixes some file opening issues for some non-English operating systems. Since you are in China, I know that you probably can't get access to the Circle Dock website at http://circledock.wikidot.com, but I've posted an alternatively download link for Circle Dock 0.9.2 Alpha 8.1 here: https://www.donation...ex.php?topic=15066.0

Circle Dock / Re: Thanks for your working! And I want to know the time.

I don't have a definitive date about when I will be releasing Alpha 9 but it will be before the month ends. It primarily depends on when I get the multi-threaded aspect of the code working. It's getting busy with university classes and midterms (already)! But I'll do my best.
115

« on: October 05, 2008, 07:20 PM »
Got the second program coded: Present This Window. This one will take a static screenshot of an embedded or standalone window and present it to the screen. This one won't crash since it doesn't change anything about the original windows.
http://presentthiswindow.wikidot.com/ 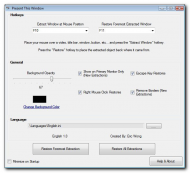 General Software Discussion / Re: Can You Run OS X on a Virtual Machine?

« on: October 05, 2008, 05:29 PM »
That LifeHacker article seems to point to the easiest way to get OS X running on a virtual machine although it's not 100% certain if the emulations virtual machine software provide will do the trick. I will have to test it out if I ever get myself some OS X software or do some development for OS X.

I agree that it would probably be breaking the EULA for OS X but this just seems as illogical as when Microsoft said you couldn't use virtual machines to run Windows and later reversed their decision. If Apple wants a better chance of taking over the operating system market share, the least they could do is make it easy for developers to run OS X on a virtual machine so that you don't have to buy an Apple machine just to run OS X. It also makes life easier for programmers so that you don't have to double/triple boot your system or you don't care to switch over to OS X when you already like the operating system you have.

Apple should follow the foot steps of Microsoft and release their own version of VirtualPC along with providing demo virtual machine images for OS or support the open source VirtualBox project.
117

« on: October 05, 2008, 04:04 AM »
What happens after you double-click on the CircleDock.exe file. Can you post a screenshot? Also, ensure you have Microsoft .Net 2.0 or later on your computer. If you are unsure about that, go to http://www.microsoft...om/net/Download.aspx and download the latest version of .Net and install it.
118

General Software Discussion / Can You Run OS X on a Virtual Machine?

« on: October 05, 2008, 04:02 AM »
Since I've been playing around with Microsoft VirtualPC and the open source VirtualBox, I've noticed that they support hosting Windows, Linux and OS/2 as guest operating systems. What's missing in this picture is OS X. I've not heard of anyone running OS X on a virtual machine so I am wondering if it is possible to do it.

It's quite possible that OS X has been crippled by Apple to only run on hardware that contains one of their chips that say it's an Apple machine and I fear that this is a very high possibility from my knowledge. OS X uses the PC architecture so there is no real reason it can't run in a virtual machine.

Living Room / Re: how to save/convert image to one with transparency for word doc ?

« on: October 03, 2008, 02:12 PM »
From my experience, Word 2007 does support transparency in PNG images and it also has a transparency tool that lets you select a color in your image and use that as the transparency mask.
121

« on: October 03, 2008, 09:15 AM »
Select all your document content, then right-click, and select "Update Field" and that should update everything in one step. Alternatively, close and open the document.
124