Living Room / Re: Has the LHC destroyed the world yet?

Actually I thought it would have been kind of neat if the Earth had been destroyed in a proton sized black hole. It would have at least stopped global warming - and just think no more British summers!!! It would also solve the world terror issue and the US christian right in a flash (plus they would all be very happy with the outcome).
-Carol Haynes (September 11, 2008, 03:53 AM)

As an American and a conservative Christian [I am, in fact the Pastor of a church in southwest Florida] I must take exception to the above comment that, at the very least, implies the equation of terrorism and conservative Christianity. If that is, indeed, what the author intended, then such is offensive, irresponsible, and patently untrue. If it was meant as a joke, then it is in very poor taste.

I realize fully well that I may be criticized to no end over this, but I just cannot sit by idly while someone ridicules the faith that I hold so dearly.
27

General Software Discussion / Re: "Open With" alternative for Windows 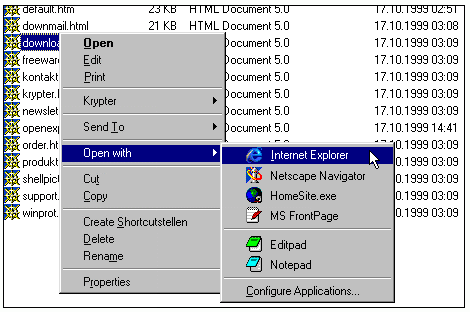 I forgot to mention, but the OpenExpert website states that the product is free for personal use.
28

« on: July 14, 2008, 10:30 AM »
As a non programmer I would find this sort of tool very helpful. At the risk of exposing my ignorance, I have yet to be able to correctly create a usable grid by editing the files. By the way, I think that GridMove is an excellent program.
29

Living Room / Re: Evernote Icon - what the heck is it? Anyone actually like version 3 ?

« on: July 01, 2008, 10:10 AM »
I, too, have tried Evernote 3 but will not be keeping it. I really do not care for web-based applications in general. This is a matter of personal preference and I know that others would disagree. Apart from that, I just do not like what they have done to the program. I liked 2.2 and will continue to use that, but I will pass on version 3.
30

General Software Discussion / Re: Whatever happened to... <INSERT DEADWARE HERE>

General Software Discussion / Re: Any app to auto-replace Notepad ??

« on: April 03, 2008, 06:08 PM »
I have been using NoteTab Pro for some time now and it has an option to replace Notepad. I think that the free version, NoteTab Light has the same option, but I am not certain. I find NoteTab Pro to be a very fine and capable program.

That would wonderful. I am not a programmer and I would not know where to begin on my own.

« on: February 28, 2008, 10:50 AM »
Is anyone able to suggest a way to permanently disable the Start Menu button from appearing on the taskbar on Windows XP? I have been using the program StartKiller from Tordex to do this, but there seem to be some issues between this program and Dexpot [when I change desktops, the Start Menu button reappears on the taskbar for the newly accessed desktop]. I never use the Start Menu and I think that it would be great to be able to remove it altogether. Some may think this request strange, but it just comes down to a matter of personal preference and my preference is to disable the Start Menu. My thanks in advance to anyone who proves to be of assistance.
35

I am interested to hear from some of the longterm users of Dexpot how stable it has been for them. What's been your longterm usage of it like?
-tinjaw (February 17, 2008, 10:52 AM)

I have been using Dexpot for several years now without any difficulties. In fact, I find the program to be indispensable in my work.
36

« on: November 06, 2007, 12:39 PM »
I used StickyPassword for quite a while and I was very satisfied with it until it began to interfere with some other programs in very strange ways (would not allow certain other programs to open secondary windows). I am now trying out KeePass.
37

General Software Discussion / Re: Which MP3 tagger do you use?