PS: timer needs some rewriting and polishing of the code. I will do it in a month

execute command can be used in place of pcommand because it is easier to do
pcommand execute plugins["JScalc"].myfunc(param1, param2);
then to handle pcommand in setstrvalue by yourself

One more remark:
try catch statements are deactivated in fsubscript. When we clean up fsubscript I will activate them again

« on: December 30, 2008, 06:16 AM »
I have uploaded new version of CZB_pack and FSubScript. FsubScript plugin contains many changes, so try it out. Especially I would like to ask Ewemoa to try it out.
Czb_pack contains now all my plugins.
83

Developer's Corner / Re: Short Coder Essay: Plugins are Not For Users

Yes, I think this is the first thing we should do after we finish fsubscript system

A couple of things:
1) can another line be added to each item in the fssc list which shows author info and web page link?  Maybe also a line with sample usage?  or these can all be combined into the description field.
2) when an fsubscript script is disabled, it probably shouldnt show up in the aplugins list
3) i think the settings stuff and the script listing/disabling should be part of the official fscript release when it goes final -- no point in not having this amazing functionality.
4) i think in aplugins list, there should be some indication of which items are fsubscript scripts vs. standalone plugins.
5) double clicking an fsubscript script in the aplugins list should bring up fssc i think.

I would also like to start bundling f(sub)script into the farr releases -- there is absolutely no reason anyone should have to live without this.
-mouser (December 04, 2008, 08:25 PM)

1) Yes surely it can. What I would suggest you or anyone else to do is to make some fancy html template which I can implement

2) Good point. I will work it out but I will have to do a very slight modification of fscript.js which would check if plugin contains at least some means of communication with FARR. If not it will no display it. And because deactivation of plugin means renaming (deleting a creating) init, search functions into init_bak etc it will behave as if there is no plugin

3) Yes.. I think so. But still I would like to keep it as plugin so I do not have to put it directly into fscript.js. Just the plugin will be bundled with fscript.js as mixer and other fsubscripts
4) ok this is also for discussion with ewemoa
5) Well rather it should point to fsubscript plugin settings if there is any. And if there is no settings then it should point to fssc. If ewemoa is not against I can rewrite it

Thanks for pointing out. Could you pls disable try catch statement and tell me more what you get from MSE? There might be some important bug so I would like to correct that

Yes removing it is a good idea

I will do that. Actualy I already did on github
87

I think it'd be nice to have these (and perhaps others) but I'm not sure about whether they should be added via prototypes -- doing it that way seems like it would mess w/ global state so perhaps initially they could just be made available via a kind of "fake" namespace.
-ewemoa (December 05, 2008, 05:07 AM)

Hi,
I can not imagine how JSON, trim, supplant would mess? But ok it can be in a namespace. What I would do is to make "extensions" folder in fscript plugin and put there all those essential extensions

To the fsubcript*.js => it is fine. I have changed my mind on that and also recommend to use only fsubscript.js. I just have not changed it in my fscript.js

Just make sure you have all those small changes I have made in fscript.js on github

(like !pi in setstrvalue, init should be there etc) see http://github.com/czb/fsubscript/network
88

Description
This package contains all FARR plugins which I have ever released. So those will be my last year work

. Moreover I have added JScalc plugin, which is quite useful calculator and plugin management system, where you can de/activate plugins, control their settings and see their html/txt files. To make the plugins work you must download latest fsubscript plugin. I recommend to download the one from this page as it has some minor changes.

Screenshots
Well it will be hard.. But at least screenshot of plugin management system: 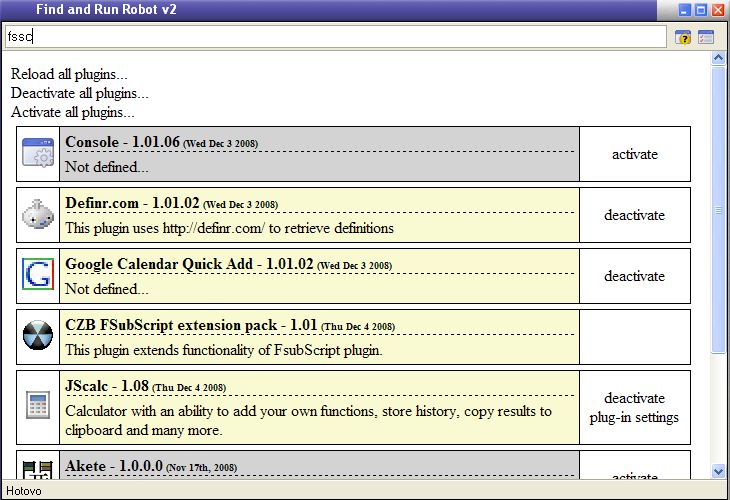 Usage
Installation
It is an ordinary FARR plugin, which uses Fsubscript plugin system.

Using the Application
To get into plugin management system type "fssc", to start JScalc type "5+2" or "5*2" or just "jscalc"

For the plugin you want to have html settings for, just add settings:absolute path pointing to the settings.html (similarly it is done with icon etc)

then go to fssc and you should see settings option next to your plugin. Give it a test

Minor:
There are already some variables. We may discuss adding others, but I am not very much fond of filling in many things

Help is a good idea. We could add help:"absolute path" to objects and in fssc we could add new link to help. What do you think?
90

Find And Run Robot / Re: Reflections on Using Multiple Instances of FARR Simultaneously

Yes you are right, that it should be unified. I will leave all naming upon you so I will definitely change it into Init() and SetStrValue

I'm not so clear on how fscript.js/onSetStrValue() should behave -- specifically, the return value seems to get decided purely on whether a single sub-plugin returns true.

Well this behaviour is for pcommand where you have to tell FARR that at least 1 plugin treated it so FARR would not display error message. I do not know other usage of returning value to FARR from OnSetStrValue, so if you know of any we can implement it

But at least some implementation is necessary because pcommand is used quite often.

onInit() in the original fscript.js took a single parameter iirc, in the most recent code candidate the sub-plugin's onInit() doesn't take a parameter. I wonder whether mirroring the original interface is preferable or not.  May be it's not a big deal.  Any thoughts?

I did it so because there is already curdir implementation via directory variable, so why to have it twice? So I would keep it without any parameter

I'm not sure about loading all fsubscript*.js files -- I wonder whether the loading order might matter in some cases and with the way the code is currently, a sub-plugin writer can only control this based on coming up with appropriate filenames.  I hadn't really thought about multiple files per sub-plugin so I start to wonder about the potential consequences and alternative designs smiley

Inclusion of other files can be done with eval(getTextFile("json.js")) if your plugin is too big to practically work in one file.

Well aceradec showed one way which is in fact very easy and straitforward, but still I would keep name variation just for the case when you want to have several small subplugins in one directory which can easily occur. But we can discuss that and if we find it as "baad" idea we can always erase it

I think sub-plugins should not extend global state. fsubscript could expose many useful functions so that plugin developers have less need for sharing things.

Yes exactly that is what I proposed to ewemoa. To have list of useful functions which make js developers life easier. The problem is to decide which to add on the list

I have also one request to ewemoa and aceradec and maybe mouser. Could one of you pls create any environment where we could colaborate on fsubscript plugin? Like propose new modifications etc... I have no experience with that so I will leave it on somebody else


Here is my corrected fsubscript plugin

« on: November 27, 2008, 03:37 AM »
Could you pls create a txt help file with all functions and other calls that fsubscript coder can use?
also pls bundle fscript.dll

Find And Run Robot / Re: Unicode??

I wonder if "fake" unicode would be possible. By that I mean that all input locations of FARR would convert unicode chars to something like utf01235 and store it internaly that way and on all output locations it would convert back.

Simple and maybe it would work, what do you think?
96

Some FARR plug-in or function/plugin for JScalc. So if you have any idea of what you would like to see, pls let me know

« on: November 11, 2008, 02:22 PM »
Yes you are right that it brings quite significant advantages and can faster development of JS plugins.

For example I guess FARR update system will not work for it, but I can imagine script plugin to be used for new JS plugin installations, maintanace etc.

Well if you do not mind I can make my new goal to make kind of sofisticated JS plugin portal, or we can make it a colaborative work together with other JS coders (ewemoa etc)

.I have also been thinking of providing similar solution, but I was waiting if you are going to solve it on dll basis, since such a solution is javascript limited.

I am not familiar with how the plugin system works, but I guess dll basis might involve direct modifications of FARR as well, which might be long run development.

Find And Run Robot / Re: Possible to Restore Session with a FARR alias?

Find And Run Robot / Re: Scriptable FARR window events for interaction with other windows apps?

« on: November 01, 2008, 04:22 AM »
I think the biggest issue here is that FARR has generaly no way how to get information from any program. How to let FARR know on which forum you are on? Ubiquity is addon for firefox so it has access to such type of information but again it is limited to firefox only. There would have to be some kind of shared api among all programs. But I doubt there is any for Windows. So generaly you would have to write addon for program in use + plugin for FARR. Is it worth it?

One solution would be to use aliases or hotkeys by which you specify your command or FARR might also provide information about from what application you came from.