This discussion has, believe it or not, taken me forward on how to deal with context menus, particularly the dynamic verbs created through shellex\contextmenuhandler.

My new approach will be to manually map out what verbs could appear in menus from All Files, Folders, Directories, and All System Objects. Knowing the dynamic verbs may or may not appear, and if they appear not necessarily in a predictable order, I will have a logical basis for trimming the context menus. (Randomly pruning the context menus is a recipe for disaster.) I'm doing this not just to make the context menus more pleasing to the eye but, in the first instance, because many are longer than the height of my screen. Not only do they take a long time to generate, the verb I'm after, Properties, is right down the bottom! :-)

Thanks for that comprehensive information. What you've done is confirmed that trying to organize context menus will be like herding cats, which is my experience so far.

The programs that claim to tame context menus are stretching the point. They help edit what is in the context menu but the user still needs to know what they want done else mayhem will result.

And how do they work out what they want done... better to forget it. :-) Some things are just meant to be that way. :-)

« on: September 03, 2015, 02:53 AM »
Thanks worstje. You've added to the scant information that I've gleened for myself through experimentation and you've made me feel a lot better about not being able to fathom it.

When I said that a 'compiler' for context menus would be ideal, I was not really asking for a compiler but trying to illustrate why my simple 'logic tracking' mechanism would suffice. Before event-driven programming, we used to debug programs by adding extra statements to programs to display the path the program was actually taking. We often used print statements to display messages like 'Here 1', 'Here 2', etc. Using such statements we could see the the logic path the program was actually taking and thereby find the bugs in our programming.

In the registry, the tracker programs are invoked at the start of the shellex sequence and at the end as follows:

The definition of CMtrackerID1 as follows:
* insert a menu item in the context menu with name '000 CMtracker START'
* add the menu item always, that is ignore the context
* no need to do anything else, it's a null action.

What we see when the context menu is invoked is,

There needs to be two programs (CMtrackerID1 and CMtrackerID2) because there is no way to pass an argument to the DDE that I know off.

It may be a long and tedious method of examining context menus BUT it will be possible with a large amount of reliability, something that is not currently available.

Notes:
1. The tracker menu names start either '000' or '999' because I suspect Windows does some sorting on the menu item names and it's important that tracker appears at the start or end of a section.
2. In the example, will Avast come before Notepad++ or after? I think it depends on the menu name the programs pass back and whether or not they are sorted. The menu item names are 'Scan <filename>' for Avast and 'Edit with Notepad++' for Notepad++. This question and many others can be answered with the CMtracker programs.

« on: September 02, 2015, 05:09 PM »
Thanks MilesAhead. I wasn't aware of the 32/64-bit complication. Sounds like this might further complicate RCM context menus which, after all, are meant to make life easier.

I didn't know about Context Menu Manager by Fahmy (http://fcorp.bl.ee/product.php?page=cmm). At first glimpse I don't think it will do what I'm looking for but I will investigate further.

What I've requested is a debugging tool. Ideally, for those interested in such matters, we really want a tool that would 'compile' context menus for any file or folder type and show use what the context menu would look like before it is implemented. :-) This is not going to happen though.
5

« on: September 02, 2015, 05:02 PM »
Thanks LifeWeaver. I have looked at NirSoft's ShellExView tool before but it does not neatly answer the question, Where does context menu item 'X' come from, when staring at a RCM menu. A complication with dynamic verbs (ones found in shellex/contextmenuhandler) is that it is the extension decides what name will be displayed (can be quite unlike what is used as the RegEdit key name) and whether or not it will appear. The reasons for appearing can be many but appear to include (1) the item is already in the context menu and so I won't display a duplicate, I'm not applicable in the current circumstances, etc.

My request is more akin to debugging programs by planting 'Here' statements in order to create a trace.
6

« on: August 23, 2015, 04:23 PM »
In order to trim my context menu, I first need to understand where the entries in the menu come from. I've created pseudo commands for static verbs (under the shell key) that indicate where in the right click menu the shell verbs appear (see attached image). This is not possible with dynamic verbs (under shellEX) as the target program decides itself what name will appear in the menu, and if it will appear at all. 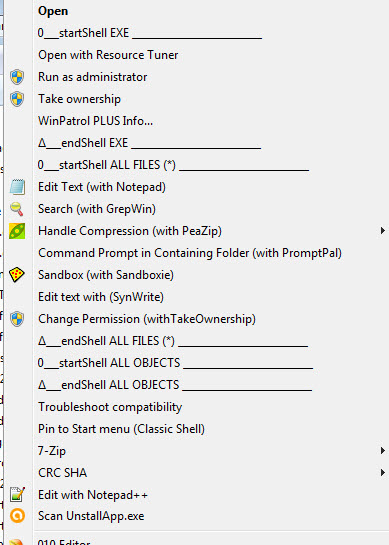 Anyone attempting this program would need to be familiar with how programs are written for dynamic verbs. After that it should be quite easy, take an existing program strip out all the actual working code and change the name provided for the menu.

I'm currently using ProcessMonitor (SysInternals) to track an error I'm getting on my machine and just happened to notice that periodically the following appears.

Is this a problem or is it normal behaviour?