« on: January 08, 2010, 09:41 PM »
The windows shell replacement Blackbox has this feature.  It is present in all forks and builds.  Essentially any fly out menu (and submenus) can be pinned by click the menu title.  To make it go away, click it again.

C'maon, it would be totally cool.

Either way, I do think this would be a very cool app.
4

Coding Snacks / Re: Coding Snack and Skrommel Software Write-ups Discovered on the Web

Highlight for me was learning what Skrommel means.

My inspiration for this idea comes from two sources:
The Blackbox for Windows plugin - bbDeskMinimize and the freeware application - DM2's "Minimize to Floating Icon" feature.

In bbDeskMinimze, all minimized apps are rendered as icons on the desktop.  However, they are limited in style by the BB engine and look pretty block.  Also, the position is static, the only movement facilitated via the .rc file.

Here are some exaples of bbDeskMinimize: 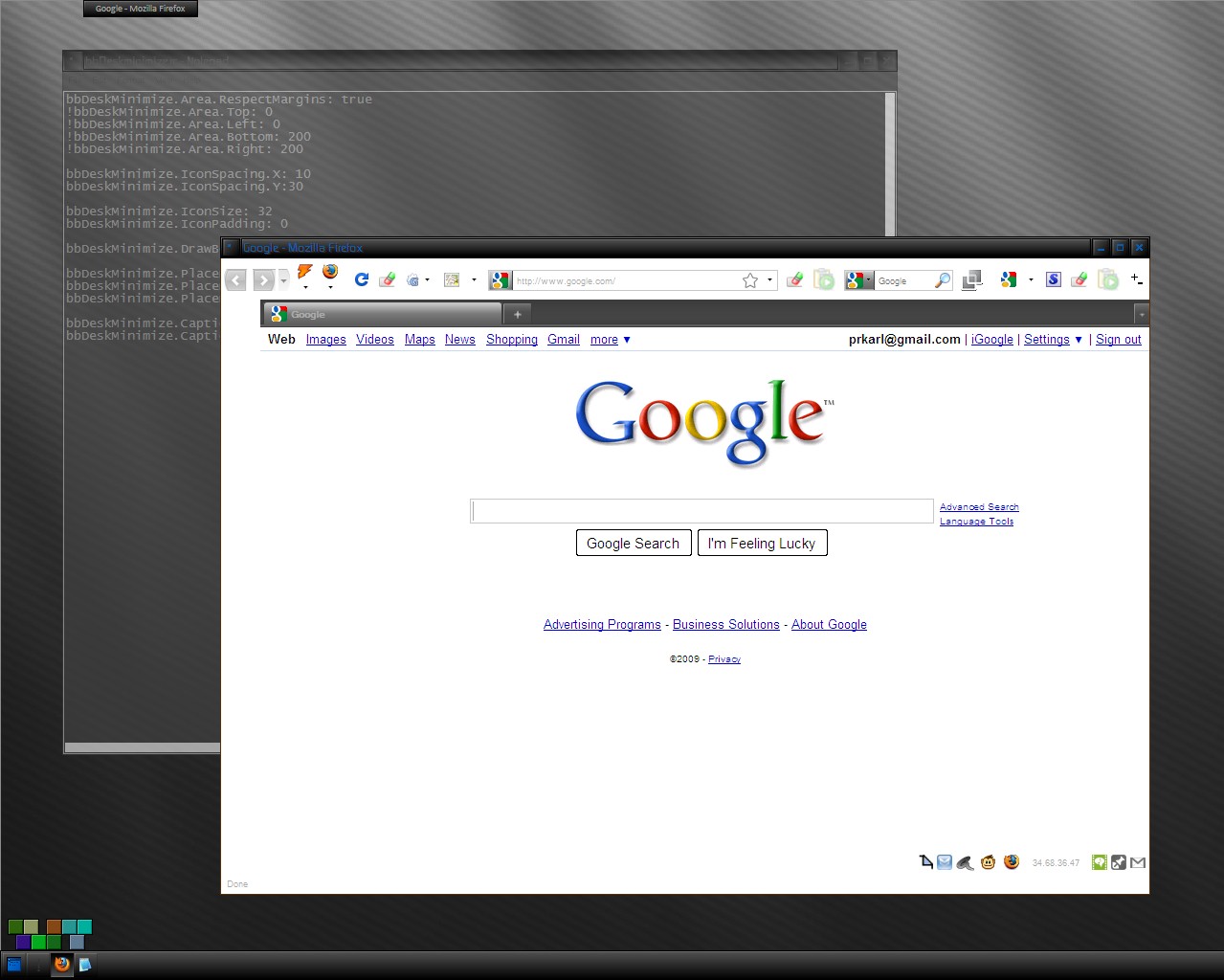 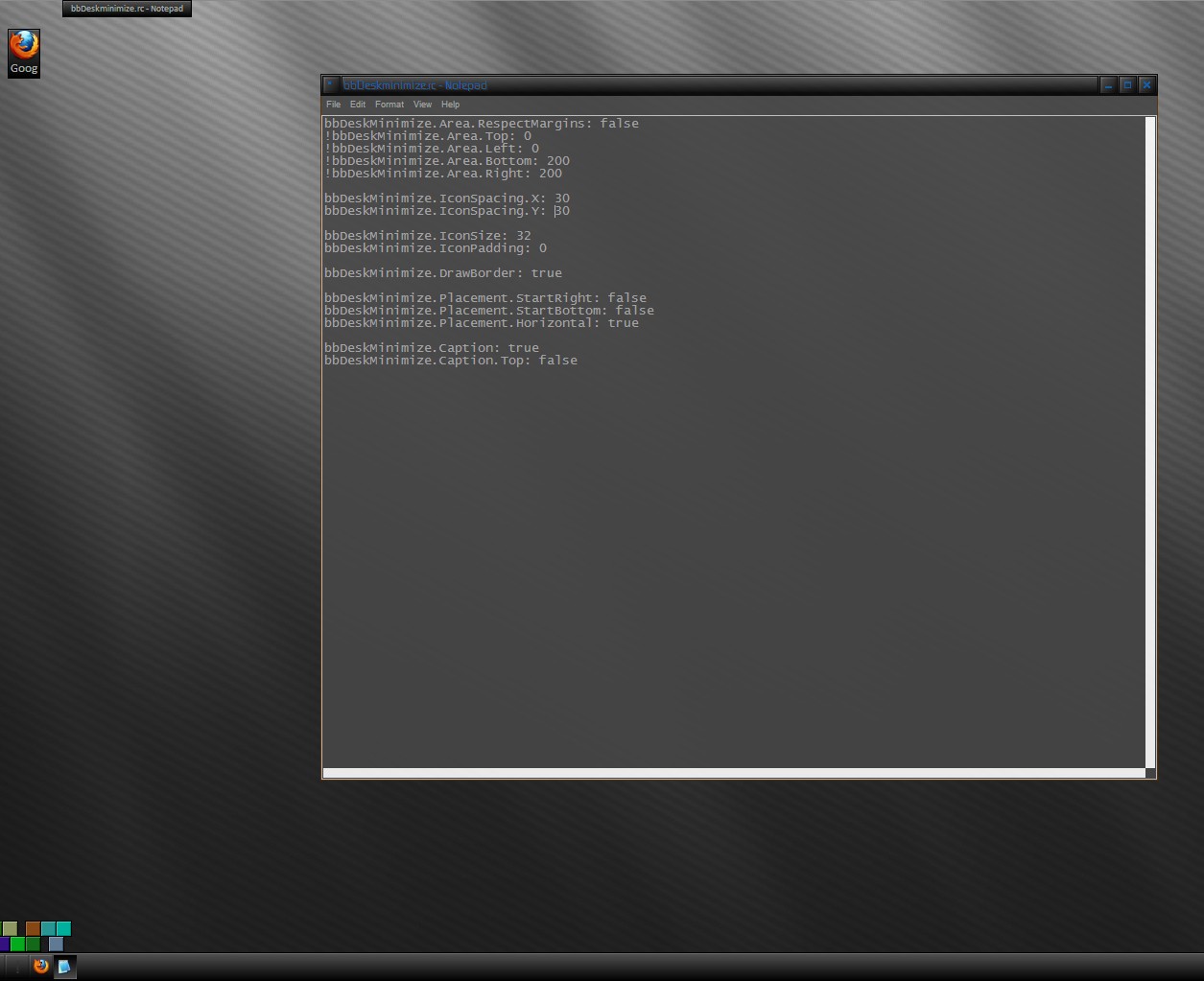 bbLean with bbDeskMinimize - Firefox and Notepad Windows both minimized to Icons 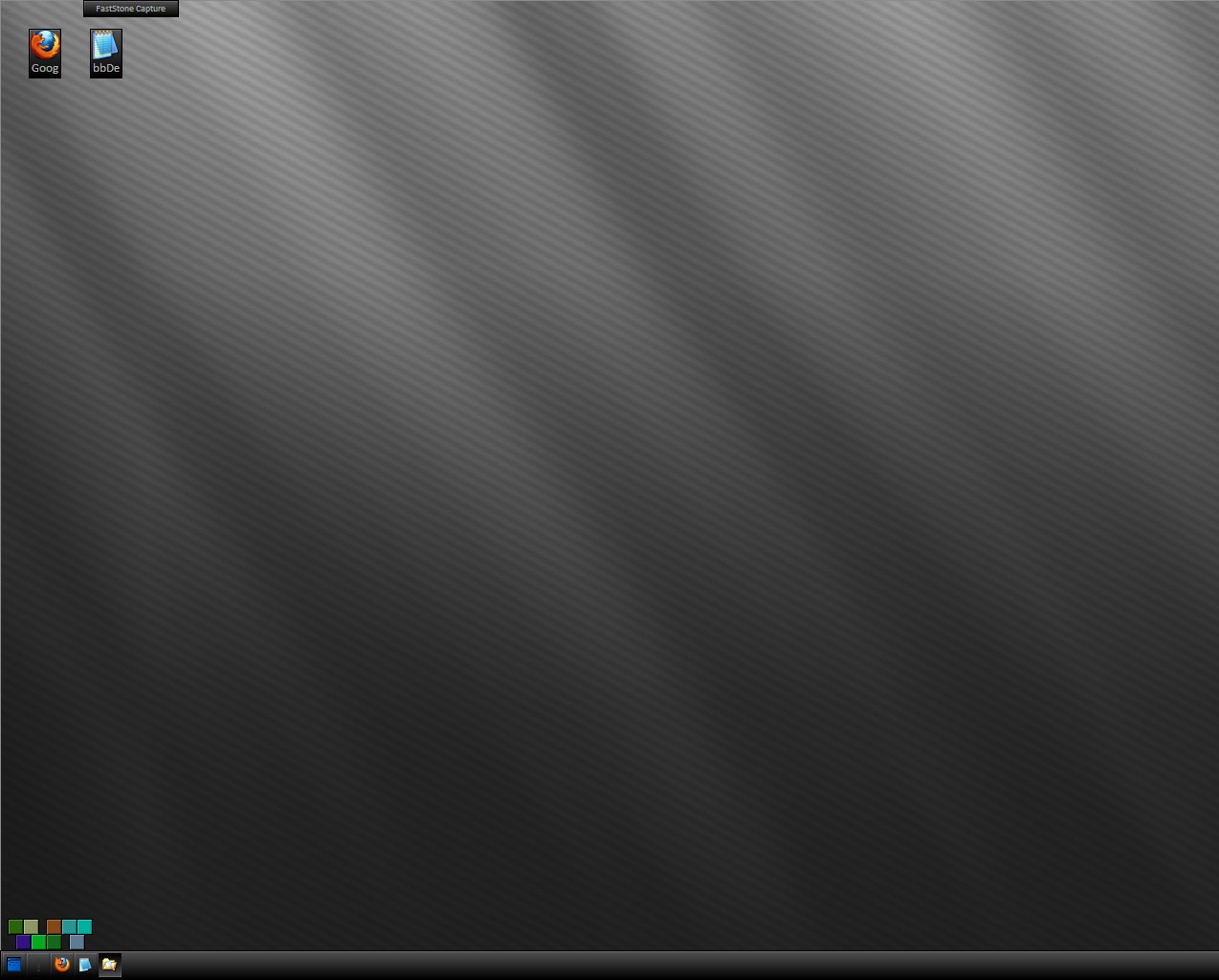 DM2 minimizes app from a custom menu on the title bar of a window. The app is minimized to an opaque square without a caption.  Also you have little control over where they spawn or placement.  While it is more control that the bbLean plugin, it is still limiting.

Neither of these quite fites the bill as I am not using bbLean right now and the DM2 functionality doesn't quite do what I want and has a lot of quirky behavior that makes it less than desirable.

Here is an example of the DM2 functionality:

Screenshot from the about section of the DM2 website

What I would like is an app that allows you to choose between minimizing all windows to icons or selecting individual icons.  I would like the appearance and manipulation to be more like a native windows DT icon.  With a caption and the ability to drag the icons around the desktop.  Double clicking would open the application.

Does that make sense?  If it would help, I could whip up some mock ups of the application to give a better idea of what I'm thinking.  Also, I have the source for the bbDeskMinimize plugin.  It's open source so I could upload it here for reference.

No problem.  I would be happy too.  Going to have to wait until tonight or tomorrow.  This work week has been evil!

I downloaded ShortCutter from Skrommel's page.  I'm running it, it's enabled and I set it up to send shortcuts to the desired location.  I think I have it all set up correctly yet, nothing seems to be happening.

I am monitoring a sub-directory in My Documents named /notes.  Within this folder are files for with a the Note application with a .note extension.

These are the logical values for these settings. At least they are logical to me.  I do find that sometimes, I run on a different definition of logical than the rest of the world.

I hope someone can help as this application is (I think) exactly what I need.

P.S.  Does Skrommel still hang at DC?  I noticed on his profile page it has been a while since his last visit.  Just curious.

I'm Kingsmob a.k.a PunkRockKarl, a 36 year-old aging punk rocker.  I'm originally from New York City but for reason beyond my control, now live in Houston, Texas. I've been a long time fan of DC and have recently ponied up and donated.

I have two kids, an 8 year-old daughter and 4 year-old son.  They and my wife are the coolest people I know.

I'm a Applications Analyst by trade, currently designing in-house apps for my employer dealing with HR functions, employee tracking and materials management for a project spanning four continents, over 35,00 employees and a whole lot of equipment. This keeps me pretty busy but it's  lot of fun.

I like tweaking, customizing and seeing just how much I can alter computers.  Sometimes I break 'em sometimes I come up with pretty neat stuff.  I dabble in programming and would like to sharpen that skill set but there never seems to be time...and I'm not really that bright.

I'm a little more adept at web development as I worked as a web developer in the past.  I guess I am a general geek as I love computers, Science Fiction and video games...Wow, it's a wonder I got married at all.  I also have a pretty extensive knowledge of music and am something of a music snob.

Anyway, that's all I can think of.  I'm glad to be a member of the DC community.

« on: October 21, 2009, 08:05 AM »
As promised here are some screenshots of my DC package.  As of right now, it is pretty specific to my machine as I didn't use relative paths.  If people are interested, it wouldn't be too much trouble to make it generic enough for the DC community to use.

To be honest, not all of these are technically from the DC site.  Some are from the websites of specific developers for apps that may or may not be featured on DC.

Here are the screenies:

The categories I set up

A full screenshot of NirLauncher

And a couple of sample categories:

I like having all of my DC apps bundles like this.  It makes it very easy to remember what everything does (sometimes a bonus for the shear volume of skrommel apps) and thier basic function. The groups allow me to easily find the exact DC app I need for any given situation.

Besides it is a marriage of my favorite two developer sites, DonationCoder and NirSoft!

You are talking about putting the "app" in one folder.  So you'd either be limited to only monitoring one folder, or putting a copy of the app in each folder you wanted to monitor.
-AndyM (October 20, 2009, 02:16 PM)

Exactly. I was thinking of one copy of the script/exe in each folder to be monitored.

I wonder if a better approach wouldn't be to have an .ini file that contained a list of "folders to monitor".  You could add to or edit the .ini file manually, perhaps with a simple interface, and/or be able to drop a folder on the interface/ProgramShortcut to add it to the list, and/or have a right-click folder menu choice to "add to list of monitored folders".

This would of course the the coolest way to do it.  I was keeping it as simple as possible in order to make it more attractive for someone to try.  An .ini file would be sufficient but some sort of GUI config would be cool too -- as long as it was simple.  I see part of the value in this app being simplicity. Easy and quick to set up and run.

What the heck, as long as you have a list of folders to monitor, maybe add a field to have an optional filter, including/excluding certain file types.

Totally.  If one was developing an .ini or GUI config, there are a number of additional features that could be implemented.

Those are just a few off the top of my head.  It could be a pretty nifty application.

Funny you should ask, I have done just this for NirLauncher and just so happens I made a DonationCoder package.

I'll post some screenshots when I get home from work.
15

If I close an app using Alt+F4, everything works as expected.  However, if I just click the close button (X) of a window, it will not end up in the list to be restored.

Am I misunderstanding how it is supposed to work?

I have been a lurker for some time but haven't posted before now.  I love DC and the amazing creativity displayed by its members.

I have an idea for a little app.  If it has been requested before, please forgive me.  I searched for it but found nothing that was exactly what I am thinking.

I'd like an app that will monitor whichever folder it is placed in and as files and/or folders are saved/moved/etc to the folder, it will create shortcuts on the desktop.

Some configuration options that would be nice: