It is purely commandline based.
Setting the root directory is done using the option "-d" followed by the root directory to search from (example -d "c:/familyphotos")
Extension filtering is done by "-e" followed by the extensions you want to include (for example -e "wav,ogg,mp3")
The amount of files for you to choose from is set with the "-t" option followed by an integer.
This changes the behavior slightly if higher than 10, as 10 cannot be input in a single character. So when selecting you have to hit enter as well.

This gif should illustrate:

« on: May 26, 2019, 11:27 AM »
Ah yes, I done goofed with the first one. Added in a check to make sure we don't try to move the directory to the same folder, but accidentally checked against the wrong variable

Pull any folder you want on to the executable and it will count the folders and files inside and rename the folder to "# OldFolderName". I put the sourcecode rar as well. If you want it for multiple folders at once that can be easily done.

Edit edit: Okay, added functionality to drop multiple folders in at once.

Something like this you were thinking off? I set the hotkey to ALT + L in this case and it is hardcoded to open VLC, but with a bit more work it could be configurable with an ini file or something.

Currently I am just running the application with the file names sent in as arguments, so any media player you'd want to run this with needs to be able to do that (or be able to do it with some argument flags)
7

Mini-Reviews by Members / Re: [Game] Legend Of Zelda - Breath Of The Wild

As you may or may not know, Nintendo has never been one for amazing graphics. Usually they go for a cartoon style.

I fundamentally disagree with this notion, while you did touch on it later in this paragraf. I'd say that visually coherent and well done stylistic presentation trumps purely technical graphics any day. And while the new Zelda seems to have a bit of both with regards to volumetric lighting and reflections. It, like World of Warcraft and Super Mario Galaxy makes really good use of their stylistic choices, and I think it is wrong to not call what they do "Amazing graphics". A game like Antichamber is not very visually advanced up front, but it makes for a compelling aesthetic experience nonetheless. Specifically because it combines both the feel of the mechanics and gameplay elements really well.

General Software Discussion / Re: How can I find approximate matches of numbers?

« on: July 03, 2018, 07:54 PM »
Tried my hand at some audio distortion by heavily altering samples, was gonna do some sort of simplified 3d animation, but it ended up crashing and I couldn't be bothered to start over. So I threw some distortion effects on a friends drone footage and this is what I ended up with.

A comic about a post apocalyptic world in which the only known civilization left being in the nordic countries. It has some great and very vivid psychedelic art some times.
-p3lb0x (May 21, 2018, 04:23 AM)

ah yes,
Edvard recommended that a while back, your post got me actually reading it though

page 1 reminds me of some of Tolkien's drawings

Oh wow, I didn't see that. Most have completely zipped past me when I skimmed through the thread.
11

A comic about a post apocalyptic world in which the only known civilization left being in the nordic countries. It has some great and very vivid psychedelic art some times.

Developer's Corner / Re: Ideas for getting more users to pay for your software

« on: May 18, 2018, 08:57 AM »
While I am sure similar software already exists, I spent most of today on creating a small utility that would allow you to very easily put down small notes about what you've been working on and outputting them in JSON, so it would be uploadable to a web server to track time.


I enjoyed this really well animated music video recently, I can understand if the music is not for everyone. But goddamn that animation is smooth and cute.
15

« on: April 27, 2018, 12:08 AM »
Unfortunately I am not well versed enough in AutoHotkey to give you a good answer, but from what I've seen... probably? But it would take a lot more code to accomplish what AutoHotkey can accomplish with a page of script using C#. From what I gather AutoHotkey has a pretty narrow scope (Feel free to correct me here, AutoHotkey gods) of what it sets out to accomplish, and does this extremely well. That scope entailing automation of tasks and small simple UIs to facilitate this, an example being renaming files or doing specific tasks at different times. Whereas C# is designed to be a fairly high level multi paradigm language that you can use for pretty much anything.
16

I'd recommend C#, it has very clean syntax, you can do a lot of things fast, has great documentation (with regards to the .net framework, for the most part anyway), great guides on how to tackle common tasks and it does all this decently quickly. However, you're pretty much tied to windows since most of the .net framework isn't crossplatform. Otherwise I'd look at some of the prominent scripting languages like Python. While Python definitely has its own quirks and problems, there are a shitton of UI frameworks (Something that definitely speeds up the presentation side of things) out there and libraries to take advantage of.
17

Announce Your Software/Service/Product / Re: Diggernaut - cloud based data extraction service

« on: April 06, 2018, 08:12 AM »
While I probably won't use your service, I gotta say. Whoever did that website design is pretty talented.
I really dislike those cartoon graphics though, but I can see how they would appeal to people just looking into web scraping.
18

Bankteller foils robbery with a squash racket, only to have his girlfriend leave him. Our hero then reunites with his long lost brother to rekindle their brotherly bond.
19

General Software Discussion / Re: Fruits of my gamejam labour

« on: October 17, 2017, 12:58 AM »
At the behest of Mouser I am gonna post the results of a small local gamejam I joined by the Organization Coding Pirates here in Denmark.

Coding Pirates are a volunteer organization that does community work with kids and young adults to get them interested in technology, programming and mixing these with more artistic endeavors (Like game making or visual arts). I hadn't actually heard of them before, but I saw the event through facebook and decided to join in.

The theme of the gamejam was mirrored from what they had helped the kids in their program work on for the last half year, but we were only afforded 12 hours (actually only 11 hours since the last hour was for a presentation). That theme being "feelings", completely open to interpretation.

The group I was in decided on "The feeling of confusion" as our interpretation, resulting in a maze game that tried to confuse the player through the use of rotating the playing field and teleporters. The game was made in Unity, something I've been dabbling in recently and hopefully can produce a small game in for my NANY. Lots of corners were cut, due to a mixture of us not being the most proficient at Unity, the other programmer in the group never having written any C# and time constraints. We did however produce a fully functional game with well defined gameplay elements and no bugs (as far as I know anyway). 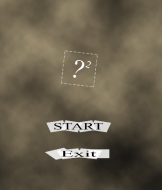 The goal of Squared? (Stylized as "?²") we made is to find 4 keys and reach the treasure behind the locked door. 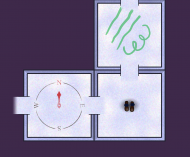 Gameplay is really simple, you walk around the maze with limited vision, only being able to see neighboring rooms. Compass rooms reorient the gameworld and teleporters move you to another place in the maze, there's also glyph rooms that help you create a mental map (that the rotations hopefully messes with).

We ended up being tied for last place however, because the game wasn't eye catching compared to the other games (that you can also download here)
22

Community Giveaways / Re: Shadow of Mordor and Neon Chrome

Scifi short about VR with a premise seen before. Still has nice visuals and a pretty good sound direction
25