Spamihilator is tested for years and is developed further permanently. In addition, there is a support which is competent and reacting fast:

The program can be trained easily and the recognition rate will reach a level of about 95% soon. This rate can be improved by many good filter plugins further. I am dependent on a good spam filter, because I get approximately 150 spam mails daily. I use the spamihilator for several years now and am very satisfied with it.
2

« on: May 23, 2008, 04:07 AM »
There is used a commercial editor component and a commercial grid component in Minimal Website. Also the supporting code for the parsers generated with the TextTransformer program is commercial. However, just at the end of the week new free TextTransformer components will be released, by which these parser could be substituted.
I like to give you - or anybody else - all parts of the code, which are not bounded to commercial licenses. Please contact me at dme(at)texttransformer.com and I will send it to you per e-mail.

« on: December 30, 2007, 06:19 PM »
I now have a contribution to the NANY 2008 programming challenge. I'm sorry, it's a program of less general interest than the program, which I have announced three weeks ago. I couldn't complete that program in time. I have wrapped an existing TextTransformer project into a very simple graphical user interface instead.

c_pp can be downloaded from

There are some additional explanations too.

« on: December 14, 2007, 04:27 PM »
I just have a new programming project in my pipe line: system wide assignment of hot keys to different small text converters. I hope, that I can finish a first version this year and participate at the N.A.N.Y. Programming Challenge.

General Software Discussion / Re: Anybody Have A Reason Why I Should NOT Purchase RegExBuddy This Week?

You are right: as far as I know, there is no other tool, which can produce regular expressions for different languages. (Until now I thought such a feature would be useless.)

Especially for Perl-compatible expressions there is a great tool at:

You also may have a look at my TextTransformer at:

There is a free regex test dialog for POSIX regular expressions integrated, which shows all sub-expressions and what was matched by them. In contrast to a Perl regex a POSIX regex always matches the longest possible string. Using this criterion, TextTransformer produces complete parsers and translators. E.g. you could make a parser for regular expressions of one language and translate it into expressions of another language.
If you or anybody else would make such a thing, and let me publish it on

I would spend him a free standard version of TextTransformer. But caution: this is not so easy.

- the tabs for the website are separated from the tabs of a page now
- the preview can show the pictures of a page now too
- you can use external css file now too. The Homepages of TextTransformer

are now made by Minimal Website with a YAML layout. For demonstration purpose, the resources of these pages are included in the installation package.

« on: September 16, 2006, 05:24 PM »
It may be interesting for some others too that I have also German internet pages which correspond to the English ones.

- There are some additional dialogs to simplify the creation of links, insertion of pictures and for special formatting in the dialog for replacements now.
- Replace expressions can consist of several lines now (!not the search expression)
- The navigation in the program is improved.
- the text to html converter tolerates more "wrong" white spaces
- white spaces in front of links are written
- a ".bak"-file is written before saving a ".wst"-file

The TetraComponents have an additional version check for the tetra_engine.dll now

I now will slow down my updating process and wait for some feedback.

The Text2Html project used in Minimal Website for the conversion of plain text to HTML now is simplified and faster. There is an additional hidden instruction to leave a paragraph untouched.
A mouse click on a link in the preview doesn't lead to an empty page any more.

Text2Html is enclosed in the TetraComponents as example too. The components now have a uniform structure. An instance of a component is activated automatically when the Execute method is called.

No matter, what will be the result of the contest, I will continue to improve both Minimal Website and TetraComponents  on http://www.texttransformer.org

« on: August 21, 2006, 07:03 AM »
A first feedback showed that Minimal Website was used in a way which wasn't intended. The program was primarily made to use available texts once more and not, to write new texts. The built-in text editor should be used to carry out smaller changes on existing texts only, to improve the result of the conversion to HTML.
The attempt to write new texts in the editor could lead to errors which are eliminated now. You also can create new texts in Minimal Website now.
There now is an installer for Minimal Website, which can be downloaded from:

I made a second contribution to the CBuilder contest using my first one. 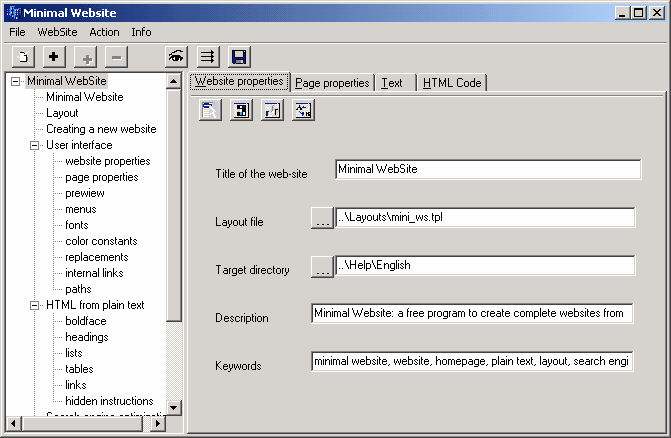 "Minimal Website" is a program to make a complete websites from plain texts. The texts are translated to formatted HTML contents automatically which then are embedded in a common layout for the website. A navigation menu is generated automatically too. Colors, fonts etc. can be adjusted in corresponding dialogs. Special attention was put on search engine optimization.
As a special feature you can call your own HTML converters. That's where the the TextTransformer components are used.


You simply can unpack the zip-file and run the /bin/mini_ws.exe. No changes are made on your system. I will make a smaller installation program soon.

My contribution to the CBuilder contest is a package with three components. I have no experience in distributing packages, so I would be happy, if anybody could tell me, whether he can install it.

By the TextTransformer components you can translate texts with a given structure in new texts with a changed structure. The HTML text of the help to the components is an example of it: it was generated automatically from a plain text file. Totally different kinds of text conversions are possible too.

The program example is quite primitive. It only is made to demonstrate the use of the components.

The code and the tetra_engine.dll (the interpreter) are free and there is also a free version of TextTransformer.

The components can be downloaded from the TextTransformer web-site: