The video is no longer available

« on: August 02, 2020, 05:08 PM »
OK, I was skeptical when this popped up in my Brave Ads.  Is this just a way for another blockchain miner to tap my precious Gigahertz to make them money, or is this as revolutionary as they claim?  I think it's a great idea that if I spend some time in a game and gather assets to my inventory, that it can represent actual possessions via blockchain, which can be used in other games on the network.  Now if they somehow develop this to the point that you can actually cash it out, hmmm...

Farmville Creator to Launch Blockchain Game Network
“It’s going to be a revolutionary experience for people,” Schiermeyer said. “Unlike any other experience I’ve ever seen, when you spend money here, you actually get something, something that you can keep, and maybe even give away or give some to somebody else. You can’t do that in traditional free-to-play games right now. And people just accept that. I think that once people realize that you don’t have to accept that situation, and you can actually own your own items, then people aren’t going to play those other games anymore.”

The first game is Townstar, which is in open Beta at the moment: https://www.gala.gam...kchain-games-on-gala
I read a little further, and paused here:

Townstar will feature an in-game tokenized currency with a fixed price. The game also includes a pseudo-mining feature. Players can purchase “loot boxes,” which contain the parts needed to build a “farm bot,” which can be used to mine the in-game currency. Farm bots can also be purchased pre-assembled within the game for a much higher price.

Mine While You Play
Only 1,000 FarmBots will be available. FarmBot is not only extremely rare but is the only way BoxCoin is mined and introduced into Town Star.
Players who have BoxCoin will be able to buy, sell, share, or use it to enhance in-game play.

And there it is.  Sounds interesting, but I'm not sure I'll be taking the plunge; they want my phone number to sign up for the game, and I don't know that they have a Linux version.  Or maybe it's a browser game?  I don't know, I couldn't find anything about it.  Anyways, check it out: 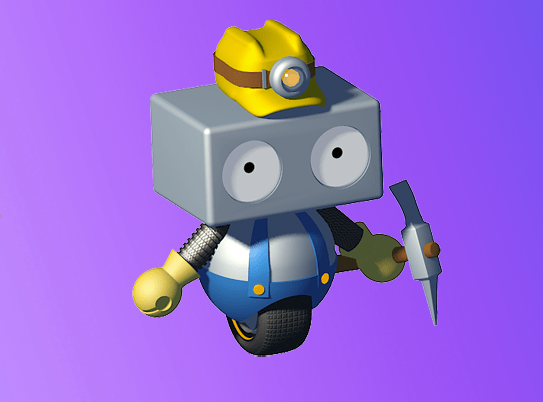 from a random Brave Rewards ad
3

Welcome to the future – where our world has become an exercise in contradictions. We are more connected than ever but alone. Healthier than ever but sick. Safer than ever but ultimately vulnerable. Seed is a story for these future times. Where the relationship between a girl and an AI system that begins simply, quickly complicates things for the entire world.

I don't know what he laced them with, but I've been tripping all day! 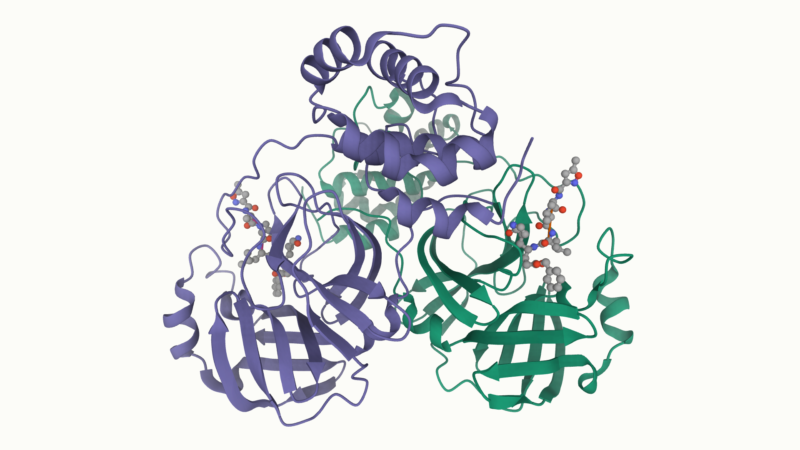 from Ars Technica, by way of CodeProject News
10

« on: April 02, 2020, 05:52 PM »
Deo, I've been doing DIY electronics for a while now.  A Y-cable may work, but is risky, for reasons I probably don't have space to explain adequately, but basically it's possible to accidentally fry the output of one output by combining it with another output, without isolating each from the other.  Ask me how I know

The next best solution would be to find or build a Y-cable that has resistors on the junctions to act as a static passive mixer, but even better would be a simple stereo mixer.  These are the best I could find on Amazon for as cheap as possible.  You may be able to search around and find them cheaper on the eBay or other site.  They have input jacks for stereo 3.5mm plugs, two adjustable inputs and one "straight through" main input so you can mix together 3 different devices.  USB output also

The perfect thing may be a standalone DJ cross-fader.  It'll mix two sources in stereo with isolating electronics so you don't accidentally fry anything, and provide a convenient method to balance the volumes of each in one handy control, rather than trying to match the volumes at each device.  The most inexpensive I could find is this:
https://www.amazon.c...Black/dp/B01JARADVO/ ~$50.00
It's passive, so no USB output, but also doesn't require batteries or power, and just the fader; no extra controls to complicate things.

EDIT: I just re-read your original post, and I missed a few things.  You said you wanted no external power required; the first 2 "Maker Hart" devices can run on batteries, so that's an option.  The Stokyo Kutter is passive, therefore needing no power, but is the most expensive at $50.00.  Maybe not as helpful as I'd hoped

« on: April 02, 2020, 11:43 AM »
My son had his Zelle hacked and apparently it's easy to do. See here: https://bobsullivan....i-wrote-to-the-bank/ and other articles about Zelle hacking on that site.
The thing not mentioned in the article is that once the hacker has added a phone number and raided your bank account, they delete the number and Zelle keeps no record of it, so there's no way to even try to track down the thief via phone number.  This my have changed since it happened to our son, I don't know, and yes this can be minimized if only people would use more secure passwords and keep a closer eye on their account activity, but there it is.
13

As COVID-19 leaves people working from home, ISPs are lifting limitations on data consumption. That’s good—and it might turn out to be permanent.

Imagine an infinitely generated world that you could explore endlessly, continually finding entirely new content and adventures. What if you could also choose any action you can think of instead of being limited by the imagination of the developers who created the game?
Welcome to AI Dungeon 2 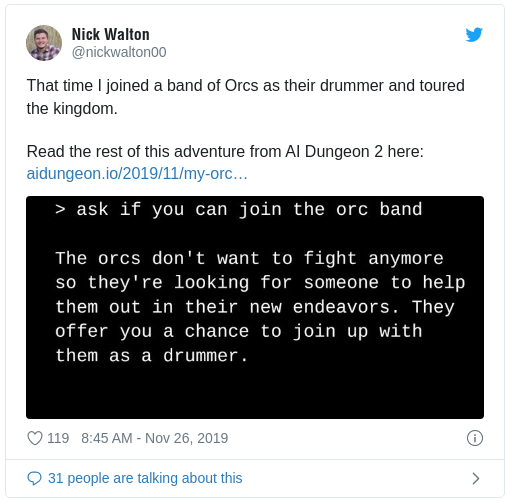 It's hilarious reading other people's adventures.  This is like having Cleverbot as your DM, which is profound and hysterical at the same time.


UPDATE: Downloads are temporarily down, so the devs are asking people to torrent the files (6.25 Gigs worth of files EEP!).
Follow the instructions on the Colab page.  It'll take a bit of git gymnastics, but it will eventually work.

« on: October 28, 2019, 02:36 AM »
My son, who is an Apple enthusiast, told me a surprising bit of news that was recently handed down in the MacOS universe.  Apparently the newest iteration of the Mac OS, Catalina, is switching to the venerable Zsh (Z Shell) as its default command line shell:
https://www.theverge...replacement-features

Apple unveiled macOS Catalina yesterday with support for iPad apps and lots of new features, but a big change for developers and power users was missing from the on stage presentation. Starting with macOS Catalina, Macs will now use zsh as the default login shell and interactive shell across the operating system. All newly created user accounts in macOS Catalina will use zsh by default. Bash will still be available, but Apple is signaling that developers should start moving to zsh on macOS Mojave or earlier in anticipation of bash eventually going away in macOS.

Most internet news sources have started asking "Why?", and come up with pretty much the same answer: That pesky GPLv3 license:
https://thenextweb.c...d-of-bash-licensing/

So, why the sudden change?
In a word: licensing.
For well over a decade, Apple has shipped macOS with a horrendously outdated version of GNU Bash. The default version on the last version of macOS, codenamed Mojave, is Bash 3.2. That dates back to 2007. For context, that’s the same year Apple unveiled the first iPhone.
...
Newer versions of Bash are licensed under the GNU General Public License version 3 – or GPLv3 for short. This comes with several restrictions which could potentially have caused a few headaches for Apple further down the line.

While that may be a *correct* answer, a few people have seen another answer that fleshes out a possibility beyond 'Muh License': the mighty 'Oh My ZSH' community.
https://sunlightmedia.org/bash-vs-zsh/

For one, zsh has the leverage of a powerful online community called Oh My ZSH. Oh My ZSH is one of the oldest and most popular options for managing zsh configurations. Offering over 250 plugins and 140 different themes supplied by the community, Oh My ZSH is a great place to start in customizing the z shell that even comes with an auto-update function that keeps your shell updated. This allows users to work in a shell with a more personalized interface, amp up their workspace with a diverse array of tools, and have access to a convenient out-of-the-box support system. For instance, a highly favorable option for the interface is a right-handed side prompt or a side prompt that auto-hides when typing in long file paths or commands. Even this minute level of flexibility turns developers’ heads towards zsh.

You might say "Ok, so it has a few themes and whatnot, but Bash also supports colorizing and you can write scripts, change configs and set aliases without needing 'plugins', so what gives?", and you'd be right.  Take a look at Bash-It, a self-confessed OMZ "rip-off" and you'll see it offers a similar experience, with nothing more than the afore-mentioned scripts, configs, and aliases.
But then I noticed something peculiar:  Most of the theme screenshots at the Themes page showed Zsh being used inside a Git session.  As in, instead of the prompt simply showing you what directory you're currently in, these custom prompts will show you what Git branch/node you're working in, and some of them do some downright snazzy things.

There are plugins and themes that go beyond Git, adding autocompletion, aliases and functions for working with Mercurial, Docker sessions, and many others. So it seems Zsh (coupled with the OMZ framework) allows you to go beyond simple colorization, and into useful visual feedback while doing work in the clean environment of a shell.
That's some downright Star Trek bizniss right there.  Nice.

So, will I be installing Zsh and OMZ on my Linux box?  I just might at that, and I'll report back my experience.
19

Brave presents new RTB evidence, and has uncovered a mechanism by which Google appears to be circumventing its purported GDPR privacy protections. 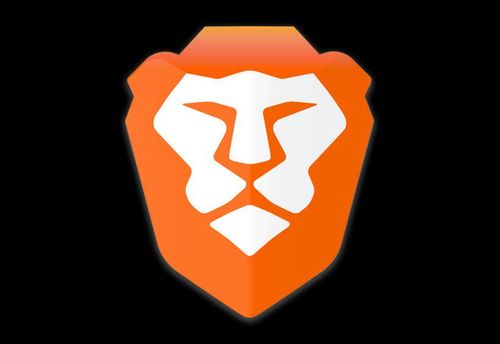 from https://brave.com/ via CodeProject News: https://www.codeproj...cript/News/List.aspx
23

Very early film usually plays at a very high speed (I'm not sure why) and is silent...
Here, the uploader corrected the speed and added sound to 1890's footage from Paris, France.
Makes it much more real for me:

Very enjoyable, and testimony to the effect that a good Foley artistw can have on an otherwise boring scene, sound-wise.  I have a few critiques about how it could have been filled-out a bit better, but I'll keep those to myself.
25