I made it using the sunvox tracker - which is a great little piece of software. ( https://warmplace.ru/soft/sunvox/ )
Here's the original file, so you can make your own version of the song and/or mess with it:

There's not a single recorded sample in there, it's all generated with synth modules on the fly - which sunvox is great at.

( can this count as my NANY?

Basically the tl;dr is that the company who owns - i guess - most importantly, the domain (because, what is there even to own in a network where everything's run by volunteers and all the servers are run by sponsors for free?) ended up in the hands of someone who wants to monetize it (sell userdata?) - all of this happened, as i understand, mostly out of control / behind the back of the staff.

In any event, the details don't matter all that much I think, freenode before - libera now; this sort of thing happens from time to time. The positive thing about all this is that it illustrates how resilient irc is to a single corporate entity controlling everything. Sponsors who run servers, can just as easily run their servers connected to a different network. Users with channels can just as easily chat on another network. If anything, the whole ordeal demonstrates how decentralization is nice; if this were discord or slack or something, you'd have to either live with the new management and their policies or have nothing.

That said, the whole ordeal has been somewhat entertaining. It's not every day you see the birth of a new network at this scale. In the beginning there was channels being flooded by botnets, and some ddosing going on- it was like 90's efnet all over again

Yes yesyes, i know most of you are on discord - i'm too stubborn to use that corporate owned crap on a regular bases (i open it from time to time, but it always feels annoying/in the way) aaanway...  something something about prying and cold dead hands....  May or may not see you in the new place

« on: February 05, 2019, 12:57 PM »
Seems like the best approach would be to create a discord<->irc bridge bot so conversations on either show up on both places. That way you avoid splitting the audience between both platforms (or you end up with even less people to talk to).
8

So, I was challenged with software - I just had a copy of DOS 4.0.1 which doesn't really come with much of anything. It did have a copy of gwbasic, so I wrote a crude program to transfer files.
Then wrote some C code to send files:

Code: C [Select]
It's not pretty, and it's pretty slow sending on byte at the time, with the panasonic machine ACK'ing it before the next byte is sent, but it just needed to be good enough to transfer a better program.
I transferred a copy of KERMIT, which has a better way of copying files, and can also act as a serial console / terminal emulator.

Here's the old machine chatting on the donationcoder IRC channel over serial:

« on: December 17, 2018, 04:35 PM »
Some years ago, when visiting the midwest vintage computing festival I picked up a Panasonic Sr. Partner luggable 8088 computer from someone's cheap "as-is" pile. I figured if it wasn't working it would be a fun project to try and restore it. 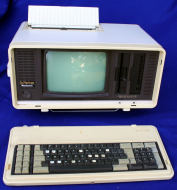 It's really kind of neat, it has a built-in thermal printer on top.

Sure enough, when I brought it home, I was slightly disappointed, although not surprised, that after switching it on, nothing appeared on the screen.
The light for one of the floppy drives remained on solid, and the screen remained dark.
I could hear a fan running, but no high-pitched whine from the little CRT screen, which is what you would expect if it had power going to the flyback.

At least a year later (or was it two?), and after moving, I finally got around to trying to fix it (first round) - I started with taking the entire thing apart, and trying to get the screen out, which ended up being rather tricky. This thing is built like a giant puzzle-tank.

When I finally got the video input going to the monitor hooked up to a scope, I was pleased to find what looked like a TTL signal, so not completely dead logic-wise. So, my attention went to focusing on the power to the CRT monitor. After inspecting the PCB and not finding anything visually wrong, and poking and prodding at it for quite some time with it powered (dangerous! don't do this without proper precautions!) I was just ready to give up, when I accidentally bump one of the flyback caps and sure enough I briefly heard the high-pitch whine of a flyback powering on. I proceeded with poking each of the caps with a long plastic screwdriver (the kind you use for adjusting variable coils) and I eventually found the one I bumped, and found that when I held it in place, the display would turn on. This was the first time I saw a blinking cursor! After pulling power, draining caps and anode, I re-soldered the cap, and the crt was back from the dead!

A kind friend had gifted me some ancient floppies with various versions of MS DOS to try with this thing, so I inserted one of them, powered it on, nothing. blinking cursor, and drive with solid red light.
After trying all the disks I had on hand, disappointed once again, I gave up for several months.

Eventually I got back to it, and concluded that the floppy drive was probably not working right. I figured I would try swapping the A and B drive, maybe the other one was good. Then I notice the B drive did not have the molex power connector hooked up. Didn't think nothing of it.
Swapped the drives, powered them both on. Now the computer won't even show the cursor! What's going on! After some trial and error:

I eventually concluded drive B was defective. It was the only option, because any time it's connected to power, the machine would be dead.
I noticed it would even behave this way when I only connect power, and not the data cable, so I immediately start measuring the pins on the molex connector, and sure enough, there is a short!

After disassembling the broken floppy drive next round, I managed to disconnect the smaller pcb on the back with the molex and data connector, with everything disconnected but the small pcb, i'm still measuring a short - this is good news! that means the problem is in the smaller (less complicated pcb).

Near the molex power connector I see 3 capacitors, 2 elco's and one ceramic. I figured that a bad capacitor there could definitively be causing this short - visually they look fine though. In absence of anything else to try, i start with desoldering the ceramic cap (as it was the easiest to get to) - still shorting out. Disappointment again.

Today I had off of work and finally decided to have another go at this! I desoldered the other 2 capacitors, and sure enough, no more short!
I replaced the ceramic cap I desoldered earlier with a spare. I didn't have a replacement for the 2 elco's (there was one on the 12V and one on the 5V pin) - i figured they are probably just to remove ripples in the supplied power, and decided to try without them.

In the end my persistence was rewarded! I finally got the machine to boot, and both drives are now functional! I eventually found a bootable dos floppy. It was very confused about the current date, as if I'm an alien from the future. It was clear no one in 2019 was ever intended to use this machine!

I tried putting in a floppy in the second drive, and sure enough, both work!

Time to fire up GWBASIC (which I found on one of the donated floppies!) and go to town!
10

Living Room / Re: Is there a way to easily carry earphones for my mobile?

Living Room / Re: External 5.25 floppy usb drive or another way?

ADS looks awesome!
This really makes me want to fix the old luggable I have laying around so we can play this in all it's original glory

In many projects, the plugin-system is the last thing to be designed -- something glued on top that would let plugins add features.  I take the opposite approach here, and put the extension system at the foundation.

I think this is wise.

For anything else I use dmenu-launch which for me is good enough.

I failed to start it.

You should be able to. I know it runs fine on FreeBSD.
It is rather picky about certain things. For example, it won't start if your system hostname is not correctly in your /etc/hosts

Is that good or bad?

FreeRDP was forked in 2009 from rdesktop with the aim of modularizing the code, addressing various issues, and implementing new features.

So presumably it will include bugfixes and new features compared to rdesktop-based stuff. That is good.
It is relatively new and many popular distro's might not include it in their repositories yet. That could be bad if you care about that. (but is a temporary situation)
22

I want a FreeBSD section.

You can also post about FreeBSD in this section.
I tried to tell mouser that writing that this section is for "Linux" and whatever else he has listed is a bad idea, but he tends to ignore my advise

The sourcecode for CDE has been released a while back, which has prompted some people to start porting it.
OpenCDE predates the opening of the actual CDE code iirc.

The source can be had here: http://sourceforge.n...code/ci/master/tree/

The porting to non-solaris platforms is still in a 'beta' stage, but it should be usable.
24