How about launching any thing with a specified position and size? This would be very helpful to those who wants to set a working environment…
3

« on: November 30, 2008, 01:10 PM »
I just woke up to try the latest version Sir, it’s around 3am now… It’s Perfect! The Line Truncator is finally complete! The application is very appealing and very useful Sir, Thanks for taking up the challenge and helping not only me but other few individuals who will greatly benefit from your software… I Sincerely Thank You Sir for the effort, patience and willingness to help other people! You’re simply the Best!

« on: November 29, 2008, 09:13 PM »
I’m sorry for a very late response Sir Paul, I’ve been very busy these past few days… The software is Perfect Sir! I think that is the Final version except for something you probably misunderstood because of, I admit a confusing explanation of mine…

Remove Ctrl+A = Select All from the Shortcuts Button since the Ctrl+C can do it and to avoid confusion to others.

Except for that one trivial lack of feature, I think it is an excellent application!

Honestly, It’s kind of strange not being able to use Ctrl+A for selecting all the text… I hope you can do something about it Sir…

« on: November 28, 2008, 01:27 AM »
One minor thing Sir, I can undo my changes even after I accidentally process the text, but I can’t redo it using Ctrl+Y for easy flipping of undo and redo history and you can add it to the Shortcuts list sir, Ctrl+Y = Redo… Thanks Sir Paul!

PS: I love the way you add the "Enter key" feature in the Exclusion text box that moves the words and adds a space, that was a clever idea Sir Paul! Thanks for adding it even though I did not request it.

Sir Agentsteal I’ve tested your latest release, It works great! I think the application is nearing its completion… These are some ideas that I hope to be implemented on the hopefully the final release…

-On the exclusion text box, I hope the truncator can remember the excluded order numbers even when the file was closed or when the Less button is clicked…

-Tab Spaces should be removed before processing like ordinary spaces…

The current version turns this example…

-I hope, I can still undo changes after I accidentally process the text…
-Remove Ctrl+A = Select All from the Shortcuts Button since the Ctrl+C can do it and to avoid confusion to others.

BTW, I’ve made a mockup of the latest version just for fun… 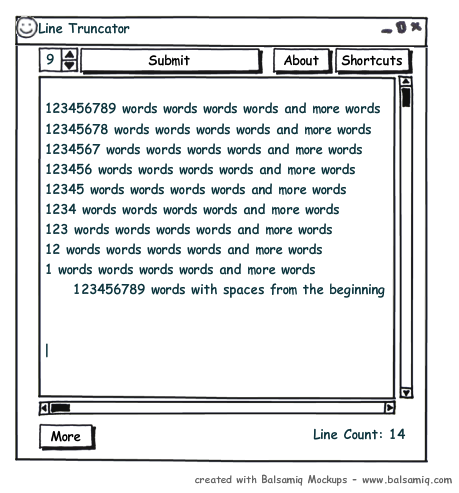 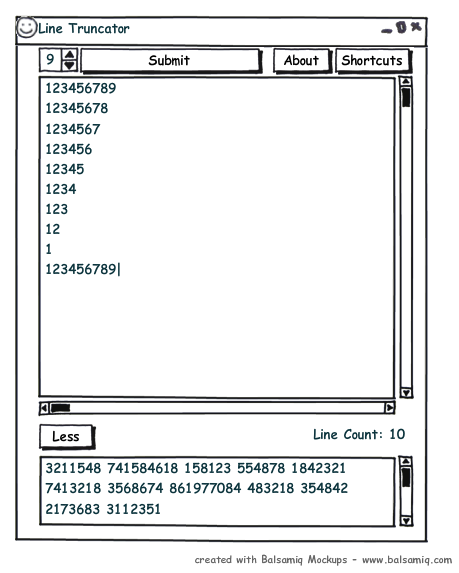 I would like to give something in return to Sir Paul but I can’t, the company I work for has their own programmers outside the country but the software they have provided us is not sufficient for the work we do… It’s hard to convince my company to pay Sir Paul to give something in return since they don’t even bother upgrading the software we use daily… I just have my own initiative to ask someone who can help me do my task… I’m just a regular low wage employee Sirs… As much as I would like to give some monetary donations in return, I just can’t for financial reasons… I hope you understand Sirs…

I hope you and Sir Paul would understand…

The only thing I can do right now is to give credit to donationcoder.com  and Sir Paul for making the software every time my co-workers ask me who made the software, that’s why I asked Sir Paul to put an About button at the top of the application that people may easily see it…

Thanks for everything Sir Paul, if I can give the favor back in anyway except for something monetary, just give me a message and I will gladly try my best to return the favor back…

I’ve tried the latest version, this is so far the things I’ve noticed… Very nice GUI! copied as is!

Thanks a lot! I’m going to use your latest version at work, I’ll make list of anything I encounter during testing of the latest version… Thanks again Sir!

That’s a BIG time saver I think Sir… Hope it will be implemented in your future version of Truncator… Thanks a lot! I’ll check the forum later this evening before I go to work… Many Thanks again Sir Agentsteal! 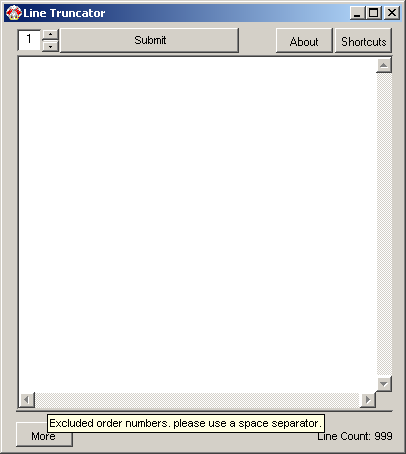 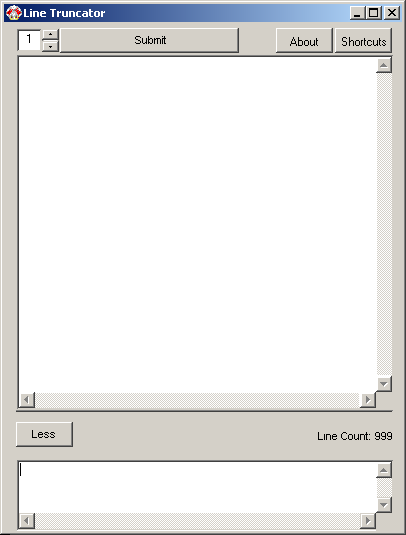 I hope my UI design is neat Sir…

I used and test the truncator at the office, my line lead saw it and liked it!

She even wants to give it to some other people at the office right away, I just told her it’s under development, She asked me who made the software and I showed her the about button and told her a friendly programmer from other part of the world made this!

I just tested the latest version sir and it works great! but perhaps you’re to tired that you’ve made the color of the text box same as of the button instead of the whole window…

I think a tooltip at the collapsible button would be a great help for other people who will use the software… You may put on the tooltip something like “Excluded order numbers. please use a space separator.”

When I used the software the whole shift at work, I did not press the Copy to clipboard and Submit not once, I learned that shortcuts are sufficient enough sir… because it’s much quicker than pressing the buttons… I think it will be much better without the Copy and Submit buttons Sir Agentsteal…

The filter box with collapsible button is working perfectly sir!

Sir, the test I’ve made last night with the truncator cuts my processing time by significant amount… probably a 90% quicker than the former method of manually selecting order numbers and I haven’t got any error at all! Many thanks to you sir!

That’s all for now sir, I will try do a mockup or something that will help you visualize my UI thoughts while eating my breakfast…

Thanks again Sir… You’re the best!

I noticed there is an undo button in the latest version of the software, Forgive me sir, I did not make my self clear, the button undo is a great idea Sir, but I think just a simple Ctrl+Z for undo and Ctrl+Y for redo shortcut without the button will do…

EDIT: I can’t make a mockup Sir, balsamiq trial doesn’t have the UI I was looking for  but I’ll describe what I mean Sir, can you make collapsible options at the bottom of the software Sir…

Purpose: Just like what I’ve posted early this morning, we use the Line Truncator to extract the order numbers, Sir can you make a collapsible textbox at the bottom of the software that we may be able to add order numbers separated by commas to be automatically deleted when they appear on the results?

The result must be from:

Thank You once again Sir Agentsteal… You’re such an excellent programmer! not to mention your very long patience…

I’m going to try it out again this night Sir, I’ll just wait for the version with the Undo function, I’m going to get some sleep for now…

BTW, if you can make use of the icon of Toad of Supermario, I really would appreciate it! Thanks a lot!

Goodmorning and Goodnight everyone… See you all tomorrow… Thanks again Sir Agentsteal! I’ll post any feedback tomorrow after I use it at the office… bye for now…

Thanks again Sir! going to try it out now…

Sir Agentsteal I tried the program at our office and I encountered a problem but it’s my fault sir, I forgot to mention that the line must be cleared of whitespaces at the beginning of every line before truncating it…

Example I opted for a length of 7 characters it will turn like in the example below, from…

And Sir may I add one more thing can you delete any characters separated from the truncated line? Please see example below…

Example I opted for a length of 7 characters it will turn like in the example below, from…

One more thing Sir… can you make it automatically process and copies the result text to the Clipboard when you press Ctrl + Enter?

Thanks a lot Sir Agensteal for helping me out… Take your time Sir… I can assure you a lot of people in the office will benefit from this software Sir… Any feedbacks for the coming version will be reported to you ASAP Sir, Thanks again!

« on: November 23, 2008, 04:11 PM »
That’s great especially when you changed Tab + Enter into Ctrl + Enter Shortcut, Sir forgive me for repeatedly asking for improvements… here is my new list during my testing…

Thanks again Sir, You can do it anytime you want… I’m already excited to use your software at the office!

Whenever someone ask me where I got this I will always point it at donationcoder and give you credit Sir Agentsteal, That’s all I can do to repay you Sir! Thanks again!

I tried it and it worked flawlessly! but… may I have a little more request Sir agentsteal that will enhance the software? This is the list…

BTW Sir, say for example I want to truncate "aaaa  a" and choose 6 as the length of the characters it turns into "aaaa  ", there's still a white space… can you make it disappear if every line has included white spaces at the end of every line?

I’m really thankful to all of you guys, that was a very quick response! This will be very useful to me, I assure you, I will use this software daily!

Thanks again Sir agentsteal and to all!

« on: November 23, 2008, 03:21 AM »
This is what I usually do at the office, I copy text and I would like to truncate every line down to about # characters… Doing it manually is really a tedious and error prone process, a lot of time is wasted doing this, I should have saved a lot of time if I have a tool to  help me do the task that I may I do other things in the office… please make my life easier…

Example: (I copy pasted the text into the text box)
From: 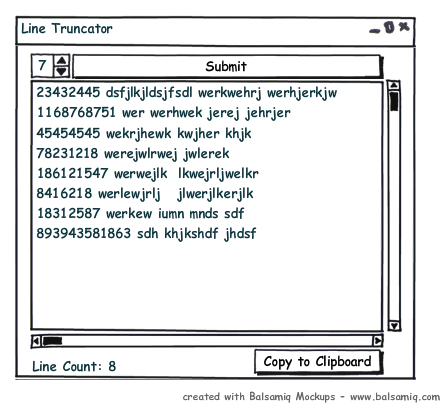 (Example I prefer the length of 7 characters and click the submit button and the textbox content will change into this)
Into: 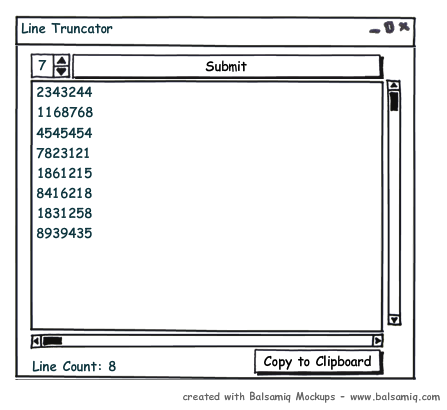 Result:
-7 Characters which I chose
-without whitespaces


Can someone please make me a simple software that truncates everyline with a customizable length and automatically removes the whitespace… Please help me I know It will be easy for you guys to make one! Thanks ahead!