You can fix this manually by copying projects.xml from My Documents\WorkCoach to \Documents and Settings\<user>\Application Data\WorkCoach each time after you've exited WorkCoach. (Only necessary if you've actually changed projects or rules.)

Maybe if the user chooses "discard background" you could take the second most dominant color?

What happened to those 3 pixels?
54

WorkCoach is a program that helps you keep track of how you spend your time on the pc, and coaches you in doing what you plan to do.

The program keeps track of the application you are using, and of the text in the window title of that application (the text displayed in the title bar). You can define projects and tie those to certain programs and window titles. For example, you can define a project "Work on my report" and tell WorkCoach you are working on that project if the application is "winword" (Microsoft Word) and the title bar contains "My report.doc". The program will display the time spent on each project in its status window.

What's new in this version?


Note: Also see this message for an overview of the new features!

For a complete change log, see the end of this message.

If you had already installed a previous version of WorkCoach, you do not have to uninstall it first.

If you were using version 0.7.5 or earlier and want to keep using your data, you have to copy it to <user>\Application Data\WorkCoach. See the instructions presented after installation for more information.

Simply run the installer (workcoach-x.x.x-install.exe) to install the program. The program requires the Microsoft .NET Framework 2.0 to run. If it's not installed, the installer will tell you and ask you if you want to be directed to the download page.

After you've started the program, the status window will be displayed. In this window you can see how much time you've spent on each project on that day. There are two "special projects": the projects "Unknown" and "Idle".
If an application and/or window title is active that hasn't been assigned to a project, WorkCoach will count the time towards the "Unknown" project. If you haven't been active (used the keyboard or mouse) for 1 minute, time will be added to the "Idle" project. 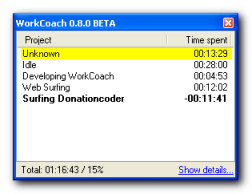 You can edit projects and rules as well as program options by right clicking on the WorkCoach icon in the Window tray and choosing "Settings". There are three tabs: 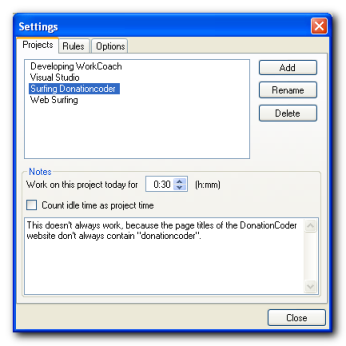 In the tab "Projects" you can define your projects and edit notes for each project. 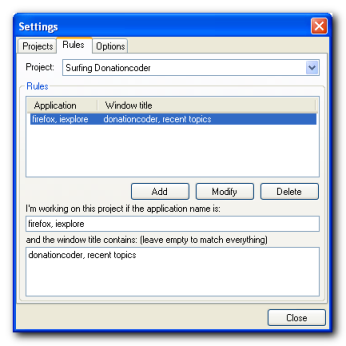 In the tab "Rules" you can define the rules that define which applications and window titles belong to which project. Every rule can contain one ore more application names (without extension) and one or more terms that the window title should contain.

Example: the rule in the screenshot above means: I'm working on the project "Surfing donationcoder.com" if the application name is "firefox" or "iexplore" and the title of the window contains "Donationcoder" or "Recent topics".

All matches are case insensitive.

If there are more rules for a projects, time is counted towards the project if ANY of the rules are met.

The last tab is the Options tab: 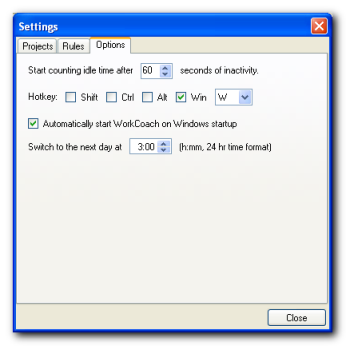 Here you can set various options for the program.

Interesting - I suggest you include a training feature, in which you are presented with a random time in binary format and you have to say what time it is!

When I click "Info" I get the error message: "System Error. Code 1410. The class already exists."

Official Announcements / Re: What changes would you like to see on DonationCoder.com in 2007?

« on: December 19, 2006, 08:01 AM »
I don't think there are topics that can't be discussed (like hardware, or whatever), but I think this site should not try to do everything. It should stay focussed on its "mission" (although not obsessively).

Some suggestions for improvements:

Living Room / Re: Tower Defence: Flash Game of the Day

Do you have any ideas? We're not going to shoot Cody are we?!

I have some experience with ActionScript, but have never made a game - I'd like to try it some day though. :-)

What I think would be really great too, is if the application could suggest a color palette instead of two colors.

Something else I'd like to see is some tips on how two use these colors when designing a web site.

Farr is back in active!

I'm not really good at picking up subtle hints like this, but I get the impression that you're quite pleased!

Well, according to Jibz, and as described here, this license doesn't say you must distribute the source code. Since points 2 and 3 in the license (see above) only apply to the source code, I wonder if they could be omitted for a freeware closed-source application. Anyone?

How about the MIT, BSD or ISC licenses? They are also short and seem comparable to the Zlib license.

I'd like a license that allows people to basically do whatever they want, except:


The zlib license as described by Jibz looks good and short seems to cover both these points -- am I right?
64

Did you do anything "weird" to the comboboxes like setting a custom color etc.?

If you say that fonts do work, do you mean that when you click an empty entry is does update the font with another font, but you cannot see which font?
-Ruffnekk (December 15, 2006, 06:30 AM)

Yes, you can't see which font you are selecting, but it does show up once you're back in the command box.
66

There used to be shareware/freeware that said: "This program is only guaranteed to take up hard disk space". I liked that.

The problem with the fonts is rather awkward. I use a .NET framework managed library to get all installed fonts on a system. I'll look into this and see what might be wrong.
-Ruffnekk (December 15, 2006, 05:26 AM)

The fonts do work, but it appears the combo boxes are filled with blanks. Also, the textbox displaying  the current font is not updated when I change the font.

The program installs itself in Program Files\Startup without telling me!

It would be nice to be able to add/edit user commands through the GUI. (Altough I understand this is a keyboard utility.)

Keep up the good work!

[..] it's not clear (to this non-Dutch speaker) what the author is saying about what I presume to be Vista's new searching capabilities and SearchSpy... Can you enlighten us about the reviewer's comments on those? SearchSpy looks interesting (if unfortunately named!).
-Darwin (December 08, 2006, 07:36 PM)

The author doesn't say very much about those two really...:

About searching in Vista: The Start menu in Vista gets a search window that allows you to search for applications fast. "Those who don't want to wait can try any of the applications discussed in this article."

About SearchSpy: SearchSpy is a clone of the search tool Spotlight on MacOS X. SearchSpy sorts the results by category. The program works with its own database, but can also use the Google Desktop index. To bad the search window can't be brought up with a hotkey.

My comments: sounds like a good idea to use one index for launcher and desktop search. Although they are two different programs that require a different user interface, they can use the same underlying data. I'm using Find and Run Robot for the first, Copernic Desktop Search for the second.
73

Another option might be FastMail, also great. They have paid services but also offer a free guest account.
74

Find And Run Robot / Re: Links to Review and Comments - Add yours!

« on: December 08, 2006, 04:41 AM »
This month, Find and Run Robot is featured in PCM, a large PC magazine in The Netherlands. In an article titled "Kickstart" they compare five application launchers / find utilities, and Find and Run Robot comes out as the winner!

This is what they have to say about Find and Run Robot:

Don't be misled by the oldfashioned name of this program, because it is an excellent application launcher with a lot of options, but also some confusing features. To start with the latter: the program works with scores to determine which file it has to show first after a search. For example: say you have a hundred files with the word "rabbit hole" in it. Every time you search for that word, you'll be after the same file nine out of ten times. When you open that particular file, Find and Run Robot gives it the highest score and will put it at the top of the list the next time. Without a doubt a good system, but why bother us with that...? To conclude, for real geeks it's a nice feature, and it's also possible to configure the search window to not show the scores at all.

The program is extremely speedy and very configurable. It might look a bit less polished than Launchy, but can do much more. At a glance you can see where the found files and folders are located on your hard disk. And maybe the best feature: every new file (only files, not folders) is found by Find and Run Robot instantly. There is no need to update an index. Impressive.

* By this they mean things like "fuzzy search"; as an example they give that "vsita" would give the same results as "vista".

Their conclusion at the end of the article:

Without a doubt, we choose Find and Run Robot. Especially the fact that the program finds new files instantly impresses us. A good runner-up is Launchy; it may not have as many features, but can be configured enough to be comfortable to work with.

Congratulations, mouser, on this great and well deserved recognition of Find and Run Robot!

A PDF version of the article (in Dutch) can be found here.

If I've made any spelling, grammar or translation errors above, or if you have other comments, please let me know.
Pages: prev • 1 2 [3] 4 • next
view mobile/wap2 version of this page