That is dependent on the current Locale. For US locale it is a single number (with fraction) for DE/NL it's an invalid number (thousands separator but not long enough) or two numbers.

According to the specs, defined by vevola, it's better to only use space as a separator, and not care about letters, digits or special characters.
52

My problem for now is 'how to make differences between real words and no words that are between spaces/quotes/point or comma terminated etc etc etc'
-KodeZwerg (February 28, 2021, 06:58 AM)

I'd replace all CR's and LF's with a space, then reduce any duplicate spaces to single space, trim leading and trailing spaces off and use one of these solutions (Depending on Delphi version used) to split the string into an array, then get the length of that array/list for the number of words.
53

I'm also planning to order the parts to make my own solution following the instructions linked to
-Deozaan (February 14, 2021, 02:10 AM)

In most countries there are shops that supply an assortment of AliExpress goods from local stock, their prices are somewhat higher than the Ali prices, of course, but they manage to deliver in days instead of months, on average. You just have to find the right shop in your country

General Software Discussion / Re: Speedtest of my Internet browsers :-(

« on: January 22, 2021, 07:49 AM »
A few questions to ask yourself:
- How is your computer connected to your router? (Some Wifi connections are really slow, wired is king!)
- Is your router (or in fact the entire chain from signal entrance into the build up to the computer) capable of handling the increased speed? (Some have a WAN port with only 100 MBit/s...) (Seems to be covered)
58

There are enough free software tools, already mentioned above, that don't need a Windows Pro license.

Assuming the OP hasn't responded for a couple of days, he may already have a solution in place, and just forgot to mention that here.

Well, assuming both laptops have an ethernet connector (though that's less and less common for consumer laptops these days), you can connect both to the same router using a cat5e or cat6 cable and have the benefit of the high speed connection for both the connection between the laptops, and the maximum internet speed attainable. The only connection available that's (potentially) faster than ethernet (assuming you have a router with 1 GBit/s ports) is a Wifi 6 connection using 4 antennas on all equipment, but there are not too many laptops providing that kind of wifi setup.
60

Living Room / Re: Does this gadget exist? Physical light-up bulb with programmable triggers

I think it will require at least 2 parts:

For the hardware, many ESP based devices are available, like Sonoff S20/S26 or Shelly, but it may need a firmware replacement as the regular API isn't that easy. I'm currently involved in the development of ESPEasy, that is very usable on ESP8266 and ESP32 based devices. With simple http GET requests you can control such device, but, some assembly required.

I know that a few years back, many developers set up lava lamps to show the commit pre-checks and build results of their CI/CD pipelines, not sure if that is still used much, as it requires physical availability of people to see the lights. Nowadays, with most of development wfh/remote there must be other ways

Screenshot Captor / Re: Can Settings be Exported to an ini File?

« on: January 10, 2021, 06:29 AM »
Settings for the regularly installed Screenshot Captor are saved in an .ini file, in directory C:\Users\YOURACCOUNTNAME\Documents\DonationCoder\ScreenshotCaptor, and is called, surprisingly, ScreenshotCaptor.ini
For a portable install it is normally written in the directory where Screenshot Captor is run from. (Unless you wrote in that file where to save the settings, but then you of course would know where that is

So any normal backup of your Documents folder, or portable applications folder, should restore your settings (haven't re-done my settings in ages, they just moved with me on several computer replacements).
62

Living Room / Re: Does the right software and hardware exist to use two wifi connections simultan?

Can you please elaborate on that? I'm trying to understand what you want to achieve.
63

Living Room / Re: My new project is now live: Co-op For Two on YouTube

Kudo's for the effort

I even hate it to show my face on Teams when in a team-meeting, so usually they just see my profile picture

These are a few of the promo photo's from the garage I bought it from:

I've not been using it much since March, of course, so it'll probably stay in the family for a long time

Living Room / Re: Saying goodbye to the old year with a cheer!

Description
Having installed a solar systems a few years back, using a ZeverSolar inverter and connected to Zevercloud for easy overview of generated power, and an interest in IoT, I found ESPEasy, and the rather affordable ESP controllers, I thought it would be nice to combine these.
The availability of very affordable TFT display (I bought a 4.3", 65k colors unit), and the requirement for the Zevercloud web interface to re-login every 30 minutes or so to be able to view the current production graph, I searched for, and found, an API to retrieve the graph data in json format.
Now to turn that data into a nice graph... enter: Python

I've only sniffed a little at python a few years back, but never actually done anything serious with that, so I took this as an opportunity to learn a few things:
- Python programming
- Turning a bunch of data into a graph
Hence this script was crafted

NB: Some assembly required! And command-line skills required! (that should fit with the average audience here

Features
Fetch data from the Zevercloud API
Present that on a TFT (or ePaper) display, connected to an ESP controller
Scale the graph, based on the max available value, so the display is nicely filled

Planned Features
Fix the login issue with the revamped API (No thanks, Zevercloud

)
Support other Solar power aggregation platforms
Any interesting features I, or other potential users, might think of
A, probably 3D printed, housing for the device 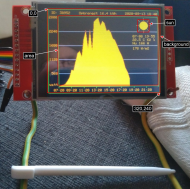 Result of a nice day of solar production

Using the Application
Run the script on a regular basis, f.e. using a scheduler, like cron on Linux (Raspberry Pi?) or Task Scheduler on Windows.

Tips
Set the scheduler to run every 5 minutes for a regular update
Setup a display timeout and add a button to wake the display, to extend the display's life expectation
As ESPEasy now also supports the XPT2046 touchscreen, mounted on the TFT unit, this can be configured to wake the display on touch (example to be added here)
Best to get an ESP controller unit that supports micro-usb for power supply and has 4 MB of flash memory, so a) it's easy to connect, and b) ESPEasy can be updated OTA (over the air) from it's web interface

Known Issues
Unfortunately, because of the recently changed API url and lacking any documentation, the login for the new API is not fully tested yet, as the new APP key and APP Secret are yet undefined how to fill (to be resolved asap)

« on: December 27, 2020, 10:15 AM »
You can switch to the beta version without worries, as it just as stable as the regular version. It just has some features that are somewhat less tested

In the beta version I think that it solves the issue of 'hiding' windows on non-visible screens.
72

Maybe you could enable/disable that by flipping an option (Edit mode?) in the Systray context menu?
75

Screenshot Captor / Re: Getting just a copy ...