Various xml language files floating around, but nothing official.

Please someone tell me that a neat solution exists?
Or do I have to use a different app to write AHK scripts?
52

« on: April 26, 2012, 01:46 PM »
JoTo: This seems to me to be a slightly different issue... earlier versions of the player did the following when playing a playlist with autostart enabled...

This caused a nasty flash as the preview image was shown for a split second.

But there is still a delay (though no flashed image) as Video 2 will not start to buffer before Video 1 ends.
54

Using a playlist causes an unacceptable gap between the files - JWPlayer doesn't buffer the 2nd video while playing the first.

Making complete videos for each recipient seems to be the only solution atm, BUT the files are big, 30Mb each, and with 80 to upload at a pathetic 40Kb per second it will take about 14 hours!

This is exactly what I hoped to avoid and seems so unnecessary since 95% of each file is identical!

All the sections are prerecorded since she knows the recipient's info.

It is important that the sequence of videos runs as smoothly as possible... a gap of a fraction of a second might be acceptable, but anything more (waiting for the 2nd or 3rd video to buffer) would spoil the effect.

My host is DreamHost and I notice that they have a licensed version of JWPlayer available to all their customers. I see that this accepts playlists as input, so might be able to use this as a solution - but only if the transitions between videos are essentially seamless as described above.

She wants to insert a customised piece of footage personalised to each recipient such that the final presentation will play as...

She could of course render out 80 versions of the video, upload them individually and send urls to each recipient, but since 2 of the 3 chunks of video are fixed this seems very wasteful!

Can anyone suggest a tool / website / clever hack that would bolt the 3 bits of video together when the recipient clicks a custom URL?
57

Pay $10 and you also get... Tripwire Interactive - The Killing Floor

Played a bit of Botanicula: it seems much more like Samrost than Machinarium - gorgeous, delighful, confusing, whimsical, and at times hilarious.

Watched Kooky: Overall it is a little disappointing - the story is pretty weak and the acting not great, BUT what ambition! The puppetry, art-design, miniature sets, and integrated wildlife are all quite astounding! I had to find a 'making of' to discover how they managed such technically complex setups.

Machinarium: I already own - it is wonderful.
59

« on: April 20, 2012, 07:58 AM »
I've been toying with Python for a few days now, and generally I'd say it is the sort of language that I am interested in learning, but there are certain issues that I'm struggling with...

1) I am running Win7 x64 - does that mean I should be running Python x64?
I assume that it means I have the option of running the 64bit version, but that I could opt for the 32bit if there were a good reason to do so.
I understand that a 64bit version will allow me to access more memory, but I don't think that will be an issue with the trivial programs that I am likely to write.

So are there any other advantages, and are there disadvantages of 64bit?

2) Initially I opted to use Python3 - since I am not tied to Python2 I figured "why not use the current / latest version". However it seems that most tutorials are tailored to Python2 and that certain libraries are not compatible with 3 (eg. PyGame)

Would I be advised to install Python2 for now and update in the future when everyone else does the same?!

3) Being a Windows user I am used to GUIs rather than CLIs. So far I've not found a package / library / egg manager with a graphical interface - does such a thing exist?

And on that subject - argh! Why is installing packages / libraries / eggs such a hassle! And why are there 3 names for these extensions?

4) I discovered that there are other distributions of Python available including ActivePython, which promised a nicer package installer - PyPm. So I installed AP and fired up PyPm where upon I discover that certain packages are only available to paying customers!

I can't see anything on the ActivePython site that explicitly says which packages are / are not available but it seems that 64bit addons are reserved for Business Edition customers only?

EDIT: OK I see it now - the PyPm homepage does discretely indicate that the 64bit builds are paid only.
60

Thanks for the push

I wouldn't shop amazon without it.
-mouser

I'm afraid I wont shop at Amazon at all: Amazon Payed No Tax on £7billion UK Sales
62

Occasionally I fall out of love with some incompatibility or other, but then I try the competition and soon find myself back in bed with Opera.
63

CZB-Pack is not listed as installed, but the updater says 0.24 IS installed and uptodate.

I miss the functionality of cc (the CharMap replacement)
64

« on: February 21, 2012, 09:20 PM »
Oxeye have now released their game... gave it a brief play. As with the other two games it will really depend on whether a community develops to build on the foundation as laid down in the Mojam.

Catacomb Snatch seems to be on a roll at the moment with bug fixes and new features flying out - there have been 5 new versions released on GitHub in the 1st 24 hours!

I worry however that with no designer or design team to steer the project it may all fall apart just as quickly as it emerged!
65

I watched some of the live streaming and was entertained by the process of putting the 3 games together. That said, the live footage would have benefited from greater focus and more of a running commentary from those involved.

Mojang's game "Catacomb Snatch" saw several builds released over the weekend, with each one adding significant new features, and the end product being fully playable if a little simplistic. The source code has now been released and a small community has emerged fixing bugs and adding new content. 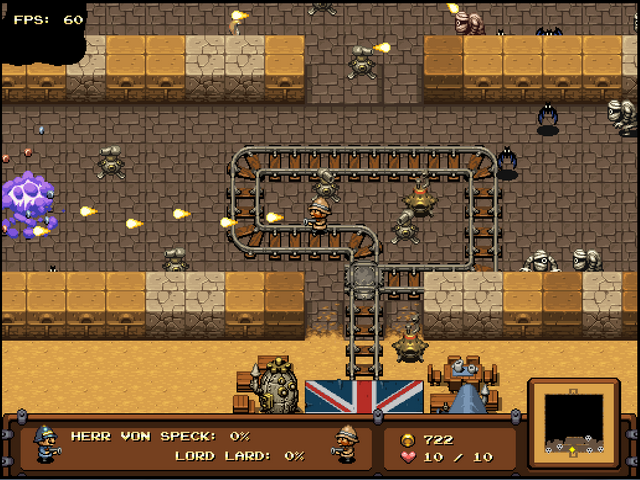 Wolffire have also released their game "The Broadside Express" along with the sourcecode. This one seems far less finished to me, but again there looks to be a small community who intend to develop the product.

Oxeye have yet to release their game.

Overall I do not regret contributing to the Mojam, but I do feel a little disappointed - it is of course better that the games are open sourced so that they see further development, but now that they are out in the wild, what did I actually get for my donation? Not the product, not the live streams (they were accessible to all) - I guess just a benevolent feeling.
66

What ever they produce is up for grabs via The Humble Indie Bundle site for a donation of your choice, with all money going to charity!

Plus - two other studios have joined in... Wolffire (Overgrowth / Laguru) and Oxeye (Cobalt) - so that is 3 brand new games in 48 hours!

DC Gamer Club / Re: Be Mine Indie Game Bundle

I think that they have tried again today... with pretty much the same result!

Find And Run Robot / Re: Pause/Break hotkey sometimes blocked by other programs

Bundle is over. No more free gifts. Now I feel greedy and spoiled for expecting more.

<Goes and stands in the corner> - <Hangs head in shame>

Hoard: Only played the 2 tutorial levels and the 1st map, but looks like it could have surprising depth for such a simple casual game. Of the 2 DLC, one adds new visuals only (a 3rd tileset) the other seems to add new maps, a new game mode, and perhaps most importantly several new game elements.

Zeno Clash: Looks lovely, sounds lovely, story is quirky! Combat difficulty defaults to hard and indeed I have died 3 or 4 times in the first couple of fights! I think I personally will enjoy this game more if I reduce the difficulty and concentrate on the story.

Lume: Beautiful and gentle. So far the puzzles are pretty generic. This is created in flash, but unlike Machinarium, nothing has been done to disguise the fact - ie right click brings up the standard flash context menu, it doesn't go genuinely full screen, and if played in a window is cluttered by Flash Projector's GUI.

Not tried the Soulcaster games yet - they do sound interesting but the unappealing graphics are turning me off atm!
71

General Software Discussion / Re: Power Mixer: I love it!

I now have far too many games, and far too little will power.

I'll be up all night playing, then be useless at work, and loose my job.

Xmas will be ruined.