« on: February 26, 2012, 02:39 PM »
Actually I guess the two Boxes wouldn't be different colors because SSC wouldn't know if I was going to pre-select, or grab, the object.
Anyhoo...  If I activate a "grab object" capture, then hover my cursor over a window (eg the above ex), different items get outlined with the Red Box (menu items, status bar, etc), as SSC is offering to grab them.  When I move the cursor to the edge of the window, the Red Box "lets go" of the inner object and Boxes the entire window.
It occurred to me that when I need to capture an Object, I likely will emphasis part of it with some SpecialFX tool AND that the thing I'll want to emphasize will likely be one of those objects that SSC was JUST A SECOND AGO offering to grab!

So my proposed idea could work like this...
Options are set to:
Ctrl+Click in Red Box = capture object.
Alt+Click in Red Box = remember that area of the image and have it automatically selected when the SSC main window opens.
User order of operations:
1. Activate Object grab.
2. When hovering over the area I will be emphasizing (or de-emphasizing), Alt+Click.
3. (SSC is still in Red Box object capture mode) Alt-Click other areas if there are to be multiply-selected areas.
4. Then Ctrl+Click the larger object.
5. When the image is initially opened in the SSC main window, the "alt+clicked" items are accurately selected.  (Note that any pre-selected area outside of the final capture would be discarded.)

=======
Note that I would not call this a critical feature...  Obviously it's not difficult to accurately select part of an image POST-capture.  It would be clever though.  And I don't think that there are any other screen capture utilities that do this...  (I'm familiar with most of them)

« on: February 26, 2012, 01:28 PM »
While using Object capture mode, it occurred to be that one or more of the smaller sub-items that SSC was "offering" to select (the stuff inside the window) are also things that I will probably end up needing to Select so that I can apply image effects...
Why not just let SSC "remember" what these things are. Then, after the object is captured and flattened into an image, SSC can have the corresponding part of the image Pre-Selected for me... 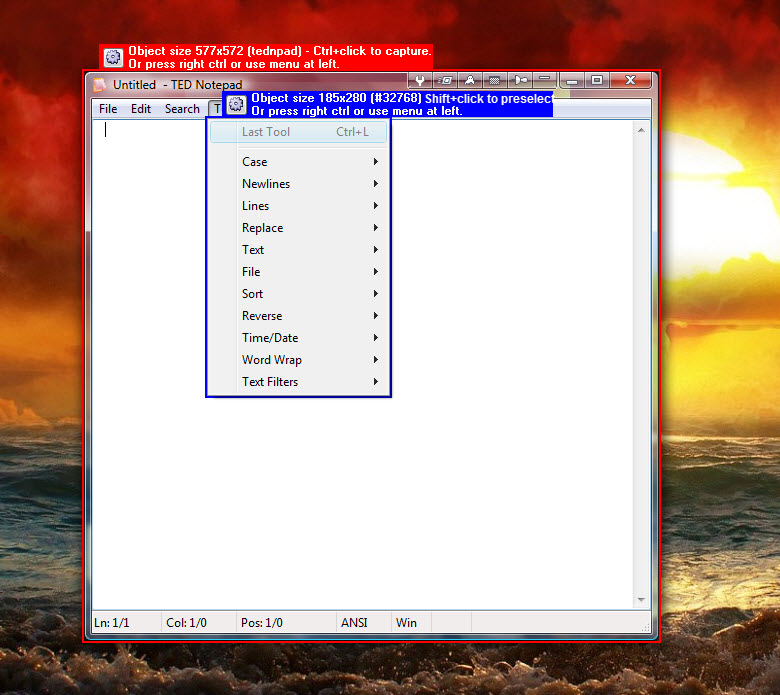 « on: February 24, 2012, 02:37 PM »
I know I remember seeing some, but can't find them now...
Thought it would be fun to Incorporated them into a custom Screenshot Captor mask/frames.
Especially if Cody was doing the "Vanna White" routine, where he's standing beside the screenshot, "presenting" it

« on: February 23, 2012, 09:28 AM »
First you'd have to invent a hand!  lol
I guess a person could try to make some kind of adaptive/dynamic font (that looked like cursive).  Different versions of a letter would be used--depending on what letters preceded or followed it--to ensure the appearance of a continuous line...
I'm not aware of any software that does this.

If a programmer REALLY wanted to be super-geeky, he could study http://en.wikipedia.org/wiki/Graphology then make options for the font to utilize different human characteristics (check here to make left-handed writing, etc).
455

The idea I had though, was to have each click add space in increments of the original image's dimensions (rather than simply doubling).

So if your image is 115 pixels wide, and you wanted four versions of the same image

For my own purposes, it would be nice if I could easily increase the canvas size by 100%.   Perhaps buttons like this: 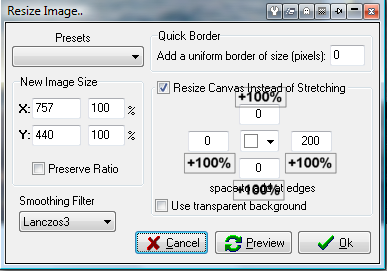 Seems like I often am comparing to version of the same image side-by-side, hence I need it to be doubled.

Screenshot Captor / Re: Any "hand model volunteers" out there?

Needs to be in a position that can be made into a mask/frame combo though.
Here check out the ones I was tinkering with...

The middle one, is the one that got made in to the above mask/frame.
Ideally, a couple fingertips will overlap the transparent area (i.e. the transparent area in the above, is the circular area), to give it a cool 3D look.  But also, the borders around the outside of the transparent part shouldn't be too wide.  The one with me holding the CD cuts off nearly half of the bottom of the screenshot that is getting framed/masked.    In this regard, the image on the left would have been the best choice (I would've cropped out my body and just had my hands in there).  Lastly, make sure you have the flash turned on in your camera so you get plenty of light and color.  My photo on the right has a good amount of color and light, but again, ugly hands

PS did you catch the finger-joke?

Post a few if you want.  Folks can vote on the best one, then I'll have you send a hi-rez of it.
This is fun  hee hee

Screenshot Captor / Re: Any "hand model volunteers" out there?

Screenshot Captor / Any "hand model volunteers" out there?


One problem is that I have ugly hands.  And my camera is not that great either.

If we have any nice-handed photographers out there, please consider donating your image for a SSC mask!
461 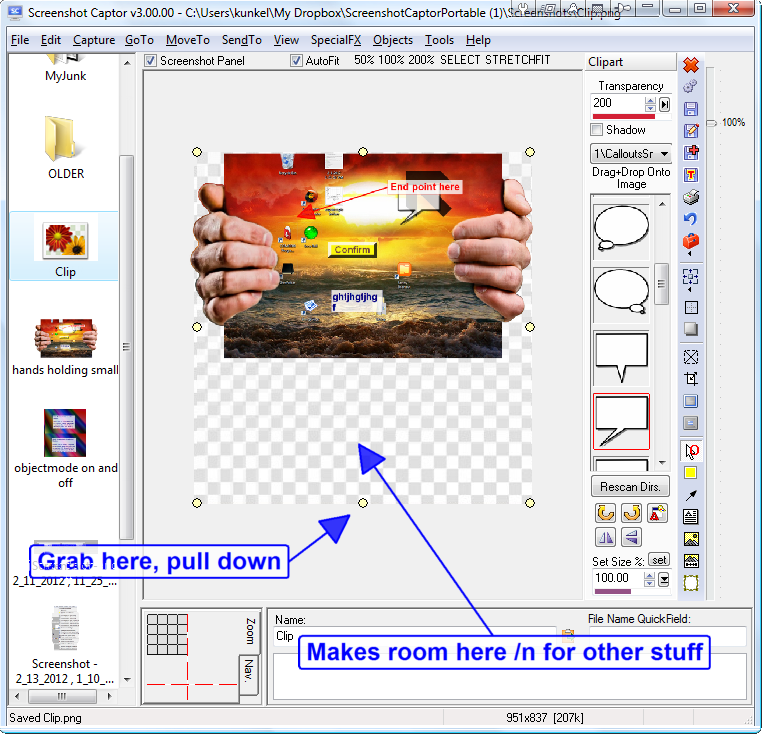 Or maybe it's already possible in some fashion?

Related to this request, is that if I drag another picture onto the original one, and it overlaps the edges of the canvas, then SSC should (optionally) increase the size of the canvas, rather than cropping off the overlapping parts...

Another related thought:  Have it so that, when creating an arrow, as soon as you release the mouse button the "Endpoint text" box is activated (and any text therein is selected), so that you can just start typing.  If nothing is typed, then no text box appears.

Also, FWIW, I'd consider bendable bezier lines to be lower priority.  And frankly it might be rather difficult to make the text boxes customizationable--from a coding perspective.  As such, it might not be worth Mouser's effort.
463 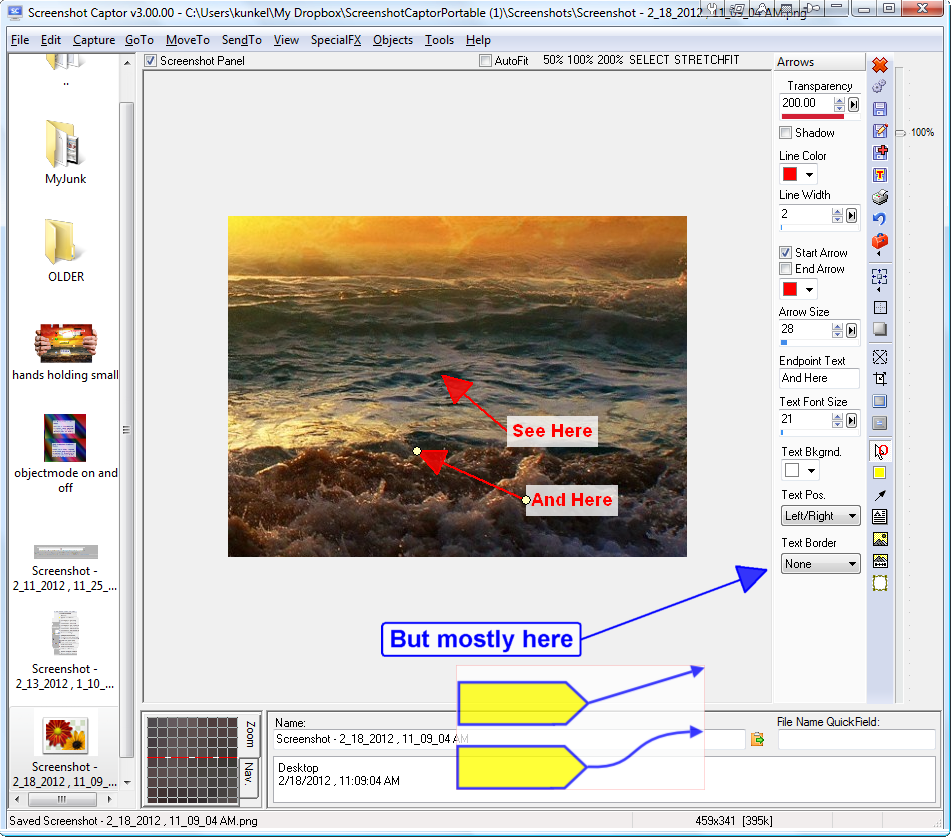 I'd like to use a "Tag" shape like the yellow one.
The ability to shape/bend lines would also be cool ...
464

General Software Discussion / Re: I spy...with my little eye...on my hard drive...

I use a combo of Windows Desktop Search, Archivarius and dtSearch. dtSearch is amazing, but four times as expensive as X1 (though I haven't paid an upgrade fee in four years). I got an academic discount on it which resulted in it being as cheap as Windows Desktop Search... Archivarius is very good and probably what I'd recommend in your situation.
-Darwin (February 18, 2012, 09:07 AM)

Are you saying that dtSearch offers academic pricing?  I don't see it on their site.

And yes, I too, have been searching for a good option here.  Was heart-broken when Google Desktop died.
465

I was trying to capture an image of the "You've captured an Object. Now what?" tool that I referenced in the resent "Interface Options" forum discussion.

To reproduce the crash (I guess it's a crash--not really sure):
1. Activate an Object Grab either by Hotkey, Tray Icon right-click, or by the menu item in SSC.
2. Ctrl+Click in the Red Box, then the "You've captured an Object. Now what?" tool pops up.
3. Before choosing one of the 4 options or closing the dialog, bring up the SSC Main Window. (By clicking its icon on the Windows Taskbar, or by hotkey, if there is a hotkey assigned to 'Toggle Visibility.')

The Systray icon stays red because SSC thinks it's still in mid-capture, but the "You've captured an Object. Now what?" tool is closed, so you can't complete the capture.  SSC has to be restarted.
Am working with v3.00.00 on Vista...  Perhaps others can try on different versions of Windows...
466

Official Announcements / Re: I want to try an experiment on the site for March 2012

The reason this bugs me is that I seem to jinx any site that I pay to join.  For example MouseTrax was a site hosted by a Microsoft MVP, who would regularly post VBA how-to videos. Of course you have to pay to get the premium content.   As soon as I joined, she stopped posting content.  Same with Gizmo's Tech Support Alert...  As soon as I join, he closes shop and merges with Win Secrets.  I guess it's just "regression toward the mean." I dunno...
467 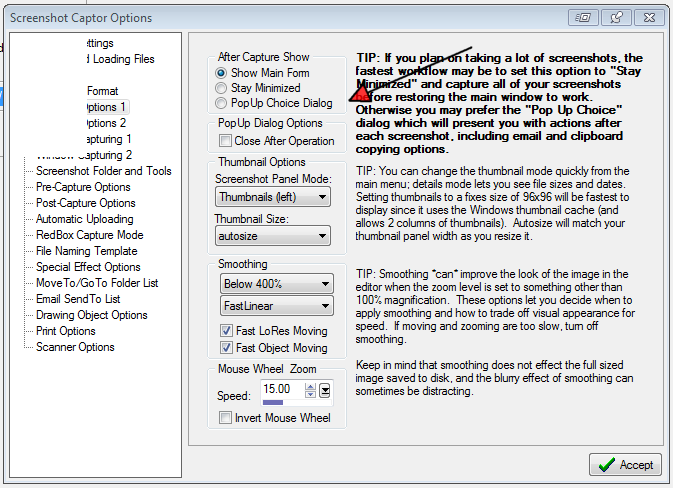 Official Announcements / Re: I want to try an experiment on the site for March 2012

« on: February 17, 2012, 11:33 AM »
I'll agree with everything Anand posted.  Especially how annoying the adds are that camouflage themselves as site content.
Also I'll add that it annoys me when sites have "paid premium" memberships that are add free--just bugs the heck out of me..
470 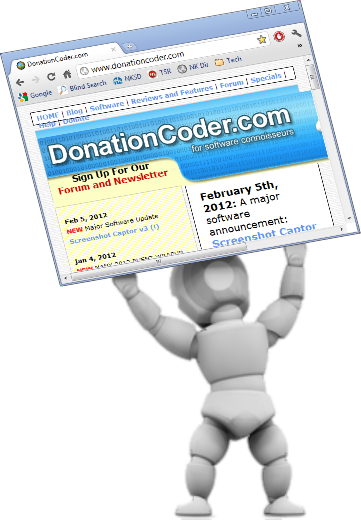 Preserves the perimeter of the screenshot AND accommodates necessary rotation/skewing/perspective...

Incidently, the above image doesn't have the "perspective" part (where the further away parts are smaller), that's why the right side of the Chrome window looks taller

The key is to save HandsFrame.png as a regular png for the fram, but then save the mask portion as HandsFrame.jpg, then change it's file type (not just rename it) into HandsFrame.png.mask... 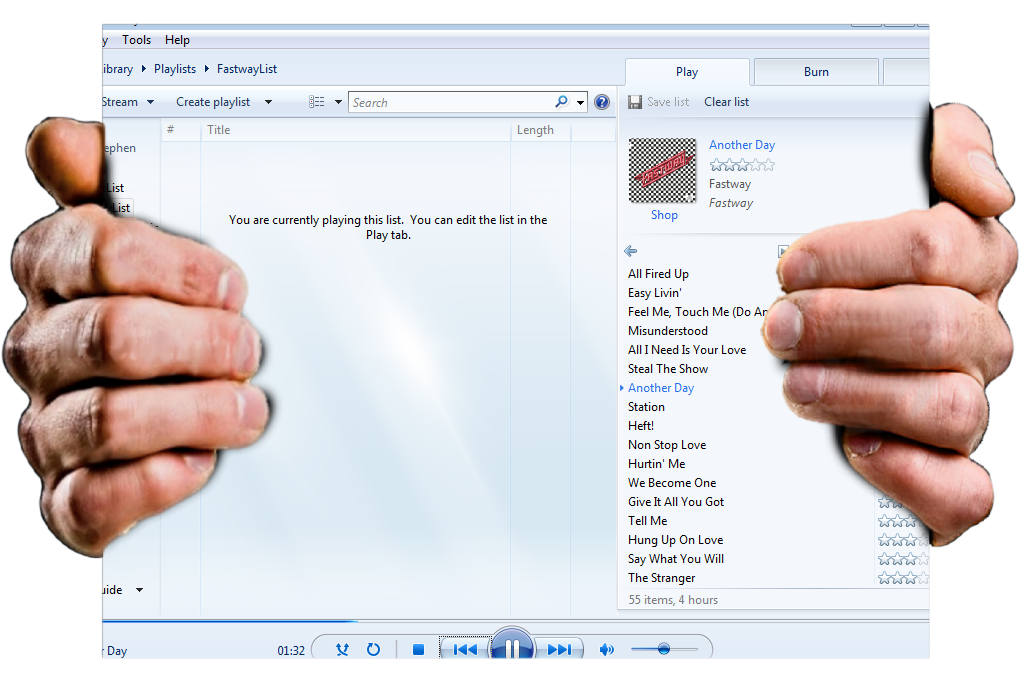