I have used Rayflectar's Project Timers for many years in order to automatically track the time I spend for certain projects, and it has been working incredibly well.

Project Timers simply monitors all current windows titles. If the title of an active window matches a custom substring AND if there is activity in that window, the respective time will be added to the project associated with that substring: 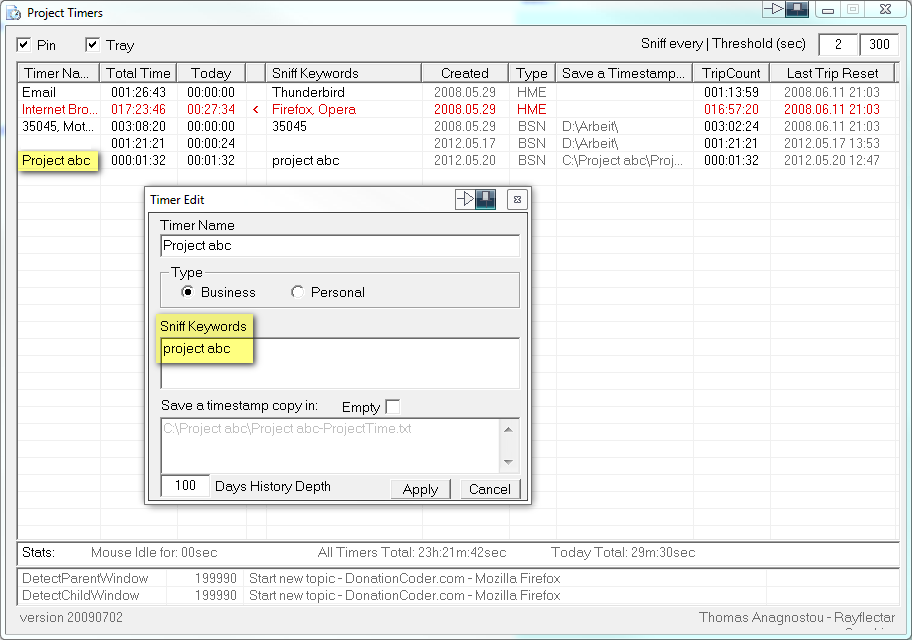 There is only one problem for me that leads to inaccuracies: for example, if I am working in a Microsoft Word document where the title contains "project abc", Project Timers will monitor the time spent in that window and add it to Project abc's time sheet - so far so good.

If however I open any dialog in Word (for example a Format, Insert or Find dialog), Project Timers will think that I am no longer working on "project abc" (because these dialogs will not have "project abc" in their window title), and it will stop the clock of that project, where actually I am still working in that project: 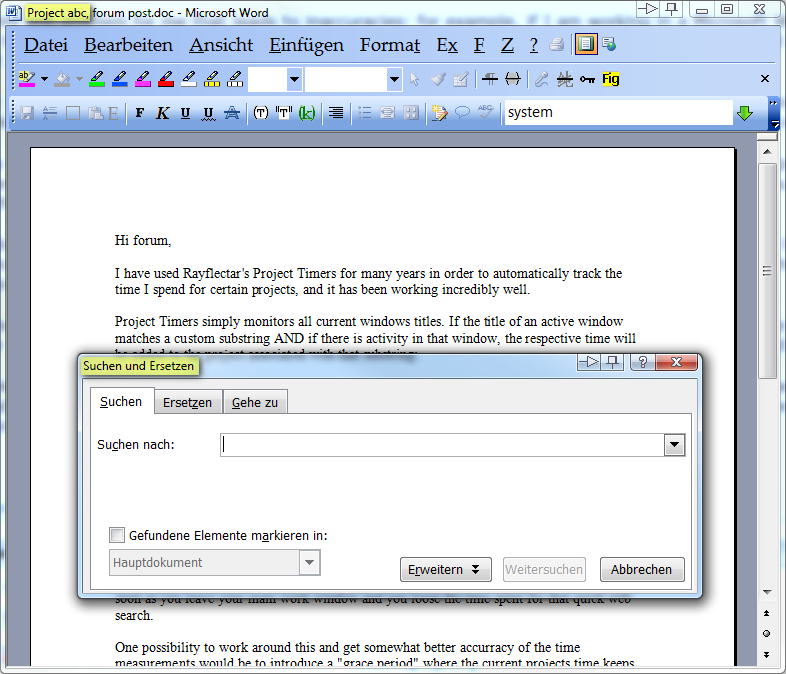 One possibility to work around this and get somewhat better accuracy of the time measurements would be to introduce a "grace period" where the current projects time keeps running for a custom period of time even after you have left one of the projects windows (for example by opening a program dialog, or doing a web search). As soon as the project window is re-entered, the respective project's time should of course start running again, even if the grace period had expired in the meantime.

Unfortunately, Project Timers doesn't have a setting for such a custom grace period. What's more, I have tried to contact the creator of Project Timers, Thomas Anagnostou, but with no success (all his mail addresses I could find are disfunctional).

Thus I think that I am prepared to donate if somebody could re-create a tool that works like Project Timers, but additionally has that adjustable "grace period" when a project window is left.

Announce Your Software/Service/Product / Re: Color My Folder

(after uninstalling and reinstalling)
103 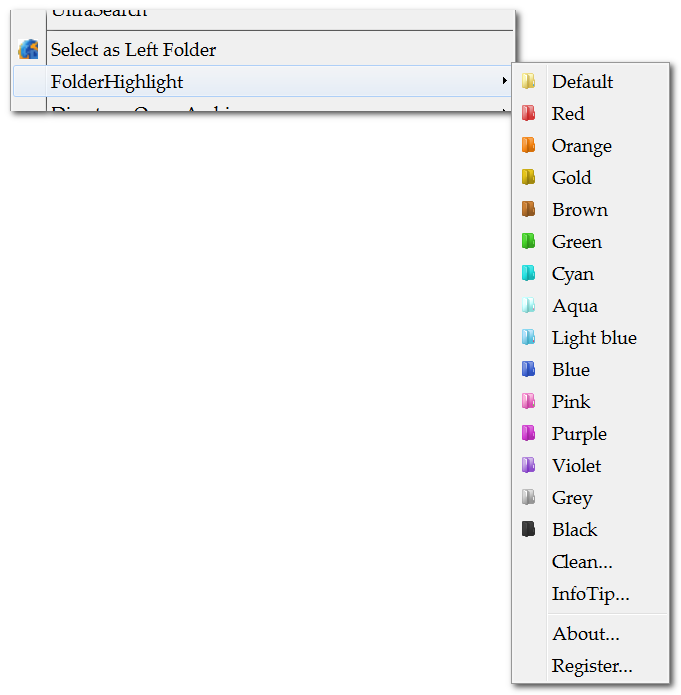 Thus, only 1 click to see the colors (well and of course 1 more to actually choose the color)
106

a) Customization. Rather than having a green icon with the text "green"

or a red icon with the text "red"

besides it, I would need colored icons with custom text -- which in my case is, for example, "bill paid" (green icon) and "bill due" (red icon). Customization via *.ini file would be no problem in my view.

b) Minimize clicks. One right click plus hovering the Folder Color Tool's context menu entry should display the list of colors directly, without further click(s).

I'm prepared to donate because this would just make a Folder Color Tool perfect for me.
107

« on: May 10, 2012, 04:27 AM »
OK seems I found one that works really well: FolderHighlight. The folder colours also become permanent and "portable" (i.e. independent of the folder location and/or presence of the program).

Yeah, it's not free, but $9.95 for a lifetime license seems bearable -- when everything else just doesn't seem to work, or costs like $35 (Folder Marker).

« on: May 10, 2012, 04:22 AM »
Since I just couldn't get my former favorite "TranslateClient" to work properly AT ALL unfortunately (especially regarding the hotkey activation), I just identified QTranslate, which seems to work really well. I also like the standard hotkey "Double Ctrl."

This has a lot of potential to become my favorite popup translator!

Nothing that really works here...
115

I have been searching my ass off looking for a simple replacement for iColorfolder (because it doesn't work in Windows 7).

But I could not find ANY alternative that was free and actually did work!

I have tried all tools suggested here:
http://alternativeto...tware/folder-marker/

Either they were not free, did not work at all (crashed), or would not allow to simply have like seven colors or so to choose from in the context menu (like below with the "Folder Colorizer" tool that would be great if it actually worked reliably which it however doesn't):

Thanks already for any other software hints
Cheers David.P
116

General Software Discussion / Re: Does anyone know any free alternative to Driver Updater Pro?

At the moment I give DriverEasy a try. It seems to identify missing drivers fast and reliably. However the driver download is very slow in the free version.

Thanks for any experiences towards other alternatives,

Now there is basically only one step more: find out how those Start Menu search keywords could be extracted/utilized by FARR.
118

It seems as if the target syntax (colons) is somewhat different between the original FARR cpanel shortcuts and the ones copied from the Godmode folder:

All shortcuts however work if simply double-clicked! Only FARR doesn't seem to see them

Off-topic but FWIW, I personally have copied the Mouser mode shortcuts to the FindAndRunRobot\Scripts\Control Panel (cpanel) folder, so I can get those.
-daddydave (April 22, 2012, 07:16 AM)

How did you to that? I have tried and copied the respective *.lnk files to this folder, but FARR doesn't give me results when typing any of those files' names (only the original ones with "cpanel" in their name still work).

A first step however could be the behaviour of the Win7 god mode. If you install God Mode:
http://howto.cnet.co...-windows-7s-godmode/

Interestingly, the God-Mode Explorer Window also reveals the search keywords for every entry like in below screenshot:

Note that there even are lots and lots of misspelled keywords -- in order for people to find for example "Bildschirmschoner" (screen saver) when they wrongly type "Bidschirm". (FARR of course is much more intelligent in this respect, as it doesn't need "lists of misspellings").

Unfortunately, for example the (misspelled) entry "Bidschirm" is not to be found in the Registry, neither via full text search in the entire system partition....

Some but not all of the search strings seem to be contained in a file called "access.h1s" in the C:\Windows\Help\Windows\[language] folder.

That's all I could find out for the moment...

--
PS: This might be of interest as well:
The Control Panel search results understand common misspellings
122

is it possible for FARR to include the results of the Windows 7 Start Button/Start Menu search? (at least the ones that are in some way Windows/Control Panel related)

For example, if I start to type "Window M....." into the Start Button search box, Windows 7 gives me "change window colors and metrics" (which accidentally is exactly what I was looking for;)

So, can FARR do this as well? -- in order for not having to use FARR and the Start Button search box if looking for things where you are not sure if it might be a program, setting, control panel or whatever.

Should be somewhere around these parts:

Anyway, I'll go for the latter -- I really have come to like it.

Are we talking about the same software?

My impression is that SharePoint Designer is almost overly complex, compared to most Editors that have been mentioned in this thread:

Actually I think I'll stick with SharePoint Designer because it's WYSIWYG-editing capabilities, and synchronized source code view are the best I've seen so far in any software I've tried.