As Ampa points out, this does not look like one of the best ways to enhanced forum searchability - indeed it's just temporary solution.

We need it coz so far Googlebot seems to have bypassed quite a lot of forum topics and esp. posts in topics that span multiple pages, and SMF forum search is well-known to suck.

btw, mouser and I have come up with a beta forum sitemap script that keeps search engines up-to-date on every single public topic and post on the forum, let's c how it works.


The download is a zip with two files inside (readme.txt and userenv.dll), checked with Kaspersky Internet Security 6.0 (Sign 042507)
230

Should I start with this problem: backing up the various (unknown) drivers?

Go to the official site of your computer manufacturer and download drivers, or simply make a copy of the DRIVERS (or similiar) directory in your C:\ drive, if it exists.
234

Haven't you got the original XP disc? I can't see why you couldn't just use that to boot and try to repair the XP install and if that doesn't work, reinstall the whole damn thing. If you've got an image of the disc, you'd probably be able to keep settings for your most important apps.
-TucknDar (April 07, 2007, 03:17 AM)

afaik, few manufacturers today include xp original disc in their retail computer packages. You have the system in the form of "recovery discs" or "recovery partition" and pre-installed with all kinds of carp (most notably Norton Antivirus), so it's not that easy to repair xp without first wiping out the whole hdd.
235

Living Room / Re: The First DC Get together Dinner and Drinks event

WordWeb is a great piece of reference software that existed long before I started to code Mobysaurus, therefore it's not a copycat of Mobysaurus (and vice versa).

Mobysaurus bases its database on Grady Ward's publicly available copyright-free Moby Thesaurus, and serves specifically as a thesaurus. WordWeb is both a thesaurus and dictionary powered by the WordNet linguistic database from Princeton University.

The two programs are inevitably not connected (almost in every aspect) in terms of coding due to huge differences in database structure and general functionality.

During the development of Mobysaurus, I actually learned quite a few things from WordWeb about creating a nice and clean user interface that doesn't confuse - you don't often see programs look as neat as WordWeb.


So far there are two features in Moby and WordWeb that look similar (as I see it):

WordWeb is presumably the first reference tool to implement "Key1 + Key2 + Key3" (e.g. Ctrl + Alt + W) patterned hotkey support, followed by Mobysaurus and then by TheSage. It's a very handy feature and I thought Moby users might like it too so I added it to the program.

to be the first one to offer this feature. The recently released WordWeb 5 also nicely supports tabbed online lookup.


Although Mobysaurus is much more powerful (brazen-faced self-praise

) as a thesaurus, it's no dictionary at all. Luckily it works with WordWeb (both free and pro versions) so there should be no problem looking up words conveniently in Mobysaurus if you also have WordWeb installed.

As for new features, what would *you* like to see in the next version of Mobysaurus?

- Anderson (the author of Mobysaurus)

I basically want it to ignore my entire HD, and index only the 2-3 folders I tell it to.

Also, does any of these applications index music tags? Say I want to search for album="foo", or artist="bar" is that possible?

afaik, there're some free plugins for Google Desktop Search (also listed in the official GDS plugins directory) that do:

Looks like the windows one will make my oneNote searches faster too. Can you limit the dirs that windows DS indexes, to just say the DC archive and my onenote folder?

Yes of course. I have WDS running and it's completed indexing my DC html pages.

If so, this could be one less application I need to install. Is there any reason you have all four in your computer and also recommend X1 dedicated to just the DC archive?

I've been testing these tools to see which is best for my specific tasks. None of them is best in all areas.

Google Desktop Search is great for general indexing everything, including visited webpages (yay!), however I find it not very convenient to specify how, where, and when the files should be indexed.

With X1, you have fine, manual control over these aspects, which makes it the best tool for the job (for me).

We have a few topics here discussing desktop search engines:

What is the currently best Desktop Search software?

Which of the  desktop search engines you recommend?

If you would like to get the most out of the DC forum crawl, perhaps it's a good idea to dedicate one search engine to indexing & searching these files, like what I did.

Go to Tools -> Option and set up the search engine like shown below (just my suggestions): 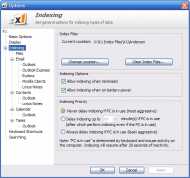 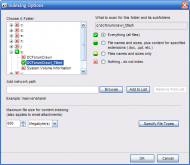 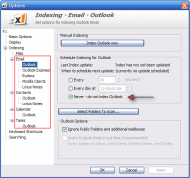 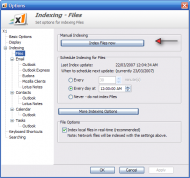 note: beware that the X1 client may ask u to install yahoo toolbar etc. during installation, remember to deselect them.

From my experience, my currently installed desktop search tools (all of the above) yield more and also more accurate results than Google does, in most cases (given the same search query), and of course much faster.

Another advantage of this approach is that search results are often previewable.


We have a member by the username of sable here and she has a huge champion cat which WoWs me, now I need to find the pic of her cat to show you. 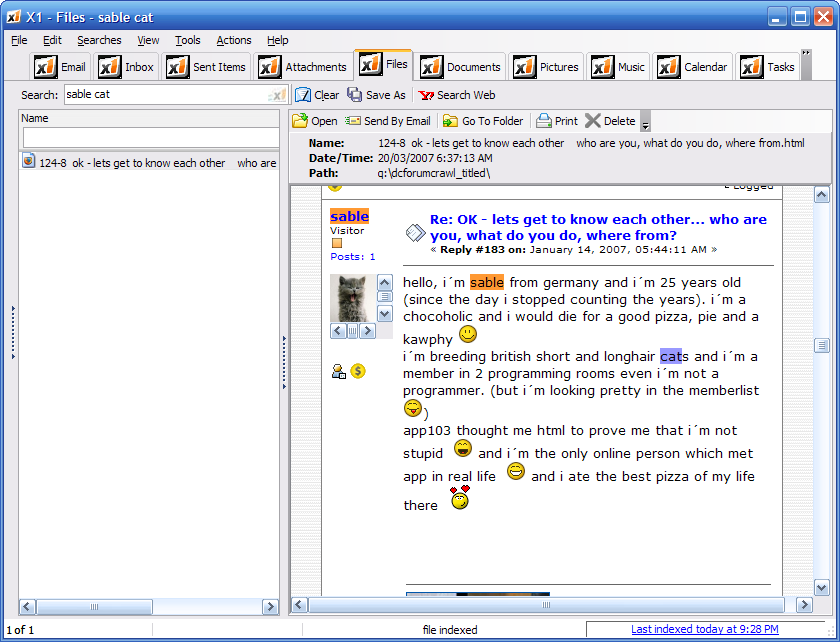 Google Search - Google is your friend! 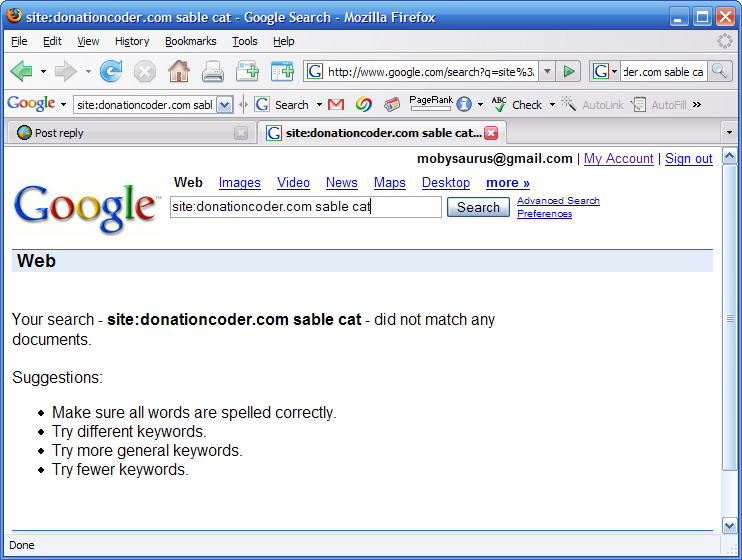 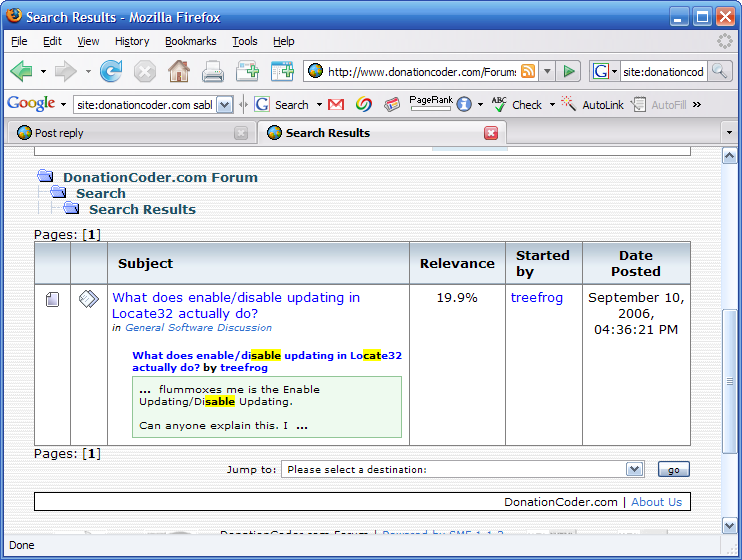 Living Room / For DC Fans: Bring DC Forum to your Desktop for searching/browsing/etc.

« on: March 21, 2007, 06:15 AM »
I recently wrote a DC forum crawler app that reads topics/posts on the DonationCoder.com forum, and saves them as individual html files.

, we now have 8277 individual html files in a compressed RAR package (divided into 4 vols), which is available from:

Download the four RAR files (67.9MB in total) and uncompress (458MB) to your desired directory. 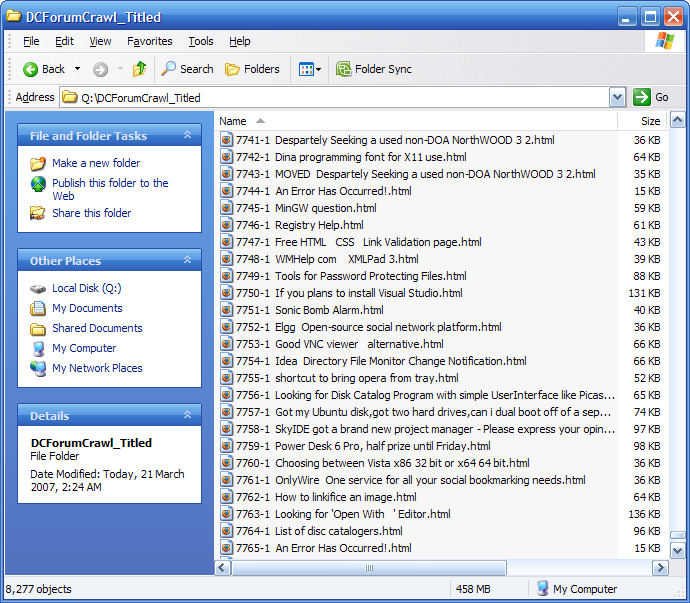 Official Announcements / Re: Upgrading the forum tonight to SMF 1.1.2 - Possibilities of minor turbulence

I did, and I also set a ban on your username and email address, which mouser later lifted (he's always been so tolerant as we all know). Mouser had nothing to do with the deletion and banning (he was asleep at that time).

You posted obvious spam in our "Official Announcements" section with nothing comprehensible but a link to your own site.

As a part of my responsibility here - I delete spams as soon as I spot them, period.

Run the duplicate remover from "Start Menu -> Holy Spirit, Southsea" after installation, and for me it works with my Outlook 2007.

What is a Prayerware - from the Author
To use this software, I ask for no payment of money.

Instead, I ask for your prayers for mysefl, Fr. Simon Rundell
and Fr. Michael Lewis, Vicar of the Parish of the Holy Spirit,
Southsea, UK in our ministry to this parish.

Prayer is a powerful thing, and not to be written off lightly:
it takes little time, but means so much to those who receive
your prayers. Every person's prayer is valuable, no matter how
saint-like, or even how un-holy you may think yourself to be:
God respects your prayers all the same, because he loves you.


If you have found this software useful and would like to make
a thank-offering to support the ministry (especially to Young
People) of the Parish of the Holy Spirit, then please consider
making a donation via Paypal.

Please copy the following link into your browser's address bar:

All of the money donated in this way is used to support work
with young people in this inner city part of Portsmouth.

Thank You and God Bless,

thanks for the info