« on: November 21, 2008, 01:38 PM »
Hello,
Using the x-button to toggle circle dock is buggy right now. I've been playing around the the mouse hook dll code in C++ and the thing is just plain weird. I can get the mouse hook to correctly work if I make in program in pure C++ but not if I make it a dll and call it from C#. For a work around, I recommend using http://www.highrez.c...useButtonControl.htm to map one of your x-mouse buttons to a key-board shortcut that will call Circle Dock up.
27

Circle Dock / Re: When i turn off my computer my circle dock resets

« on: November 16, 2008, 06:10 AM »
Hello, did you unzip the file you downloaded? Circle Dock saves your settings immediately after they are changed so ensure that it is unzipped and in a permanent file location.
28

It is something that is practical and has some important real life uses. I also just realized that this project might be quite useful for one of the engineering teams at my university.
29

« on: November 14, 2008, 12:20 PM »
Those icons you specified are not regular icons, but are actually fronts for a CSLID. You first have to make a shortcut for those icons and then put them onto Circle Dock.

As for disappearing and reappearing, you can set Circle Dock to disappear after you click an icon on the dock but you have to call it back yourself using either the mouse or a keyboard shortcut.
30

« on: November 13, 2008, 01:45 AM »
Yes, this can be done. I don't know of any specific program for Windows that does what you described with a with a linear line as a timer indicator but you could easily do it if you start off with the source code for Custom Desktop Logo: http://customdesktoplogo.wikidot.com. You would simply write a draw function that draws a line into an image in memory given a min, max, and current time. Custom Desktop Logo already has a timer so that can be used to update the time in the line. The text is also easy to do since we can take the text function with alpha blended shadows from Circle Dock: http://circledock.wikidot.com.

For multiple timers, you could simply run more than one instance of the program.

Edit: If we want the line to be docked to an edge of the screen and take up something like 1-20 pixels so that other windows won't overlap it, that could also be possible. I remember seeing an example program over at CodeProject that taught you how to create a toolbar that reserves screen space. There are probably multiple code paths that can be taken to make the program in an easy fashion.

Does anyone know of a current program that does this or want to do it in AutoHotkey?
33

I just tried both versions 1.2 and 1.4 out on my computer and the fonts of the buttons can be resized on both to the Microsoft Sans Serif, 22 point font. I've attached my working copy of 1.4 to this post, see if the font size works out for you.

General Software Discussion / Re: Use this modified version of Chrome for more privacy

« on: November 12, 2008, 11:24 AM »
Better have a speedy computer to compile the Chrome/Chromium/Iron code. It took me nearly 2 hours to do it from scratch on my dual-core laptop. After that, it isn't too bad. Make sure you also have the Windows 2008 SDK v6.0 and v6.1 installed on your computer or otherwise, the code won't compile. Also, expect to wait a few hours while the Windows 2008 SDK installs, and I do mean hours.
37

« on: November 12, 2008, 10:55 AM »
I have been busy with some life stuff lately and haven't had much of a chance to do much programming on any of my projects. Hopefully, I will get time to hunker down.

« on: November 12, 2008, 10:47 AM »
Thanks for the suggestions. I have been busy with some life stuff lately and have had to postpone my programming lately so I haven't been able to work on my programs but I will keep your suggestions in mind.
40

« on: November 12, 2008, 10:40 AM »
Hello, Circle Dock will automatically overflow into multiple concentric circles when the inner circles fill up. You can change the number of icons to put in a circle by going to Settings -> Dock Shape
42

« on: November 12, 2008, 10:35 AM »
Circle Dock uses a mouse hook to capture the middle mouse button so it would see the button down event before your remote desktop application. To work around this, you can temporarily suspend the mouse hooking in the current computer you are using by right-clicking on the middle of the dock and checking off "Disable Mouse Toggling". This will stop the mouse toggling on your current computer and allow your remote desktop program to see the middle mouse click. To restart the mouse hooking on your current computer, right-click on tray icon for Circle Dock and select "Enable Mouse Toggling"
44

« on: November 12, 2008, 10:29 AM »
That is a weird bug. I haven't seem Custom Desktop Logo do that on either Windows Vista or XP even when I open and close the settings windows. It should be independent of your hardware because Custom Desktop Logo uses the .Net Framework. Perhaps you have a blank image in the same folder as the image you want to display?
45

« on: October 28, 2008, 04:41 PM »
Hmm, there shouldn't be any change in the performance of opening a program through Circle Dock since there wasn't that much code change. However, if you are having problems with Alpha 8.2, feel free to go back to Alpha 8.1 since there isn't much difference. You can copy your settings back and forth between the versions without problems.
46

just add them as a menu bar, that way they'll always be visible...

with ref to the comments issue, how about a 'flyout/popup'?  Adding comments is likely to make the interface too busy (perhaps a button at right of each item)
-Target (October 27, 2008, 11:50 PM)

Yes, by toolbar strip I mean a menu bar.

For the comments flyout/popout, I can see how it can be too distracting to have them showing for a large number of AHK scripts. I think a solution is to put a question mark '?' after the name of each script which will show a tooltip on mouseover with the comments.
47

« on: October 27, 2008, 11:21 PM »
This is a very good idea! I've also been following the AHK LifeHacker messageboard and I think this is the best idea to pursue because it is very useful for power AHK users. Here is what Axem looks like on my computer: 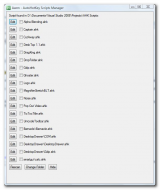 I imagine that Axem could become very popular to package a set of separate AHK scripts together for distribution and for a more user friendly first user experience when using AHK. Along this line of thought, here are some ideas I think would enhance the user experience:
(1) I think that the icons of the AHK scripts should be shown to the left side of the Axem window to help with visual distinction.

(3) I have Axem running and I second the motion to show the comments near the top of an AHK file if available. I know comments won't be available in compiled scripts but it would be nice to have them if available. I think we can model this based on how Skrommel has his AHK scripts page laid out: https://www.donation...m/Software/Skrommel/. The AHK script icon would go on the left and all the other buttons/check boxes/text would go in a group box on the right.

As an AHK user, I sometimes find myself bewildered as to what a script actually does and what keys will do what so I think good commenting on the part of the programmer is essential.

(4) Could we change the background color of Axem to white or perhaps a light shade of blue? It would look nicer with a color other than grey. We can debate about how Axem should look but the color grey just doesn't agree with me.

(5) Place the "Rescan", "Change Folder", and "Hide" buttons at the top of the Axem window as a toolbar strip since these are higher level commands.

« on: October 27, 2008, 10:33 PM »
I think it would be possible to write a little bit of AHK code to automatically re-hibernate your laptop again if it comes out of hibernation and there is no user input for 1 minute. However, it probably would be best to track down the culprit first:

it seems the first thing to do is to go into the Hardware Device Manager and check that your mouse/modem/external devices are not allowed to wake up your laptop. If you still can't find the problem, I can write that AHK script to re-hibernate the laptop. I remember seeing an example where AHK can detect if the computers wakes up so it should be doable.
49

Example to move files out that have a .msf extension:
Code: AutoIt [Select]
I think you might simple have to change your loop lines to something with the "0, 1" parameters attached to the end.

« on: October 27, 2008, 10:09 PM »
Check out this thread: https://www.donation...ex.php?topic=15292.0 on how to give Windows Media Player the next button command by AHK code. It may do what you want if you want if it is something similar and simple and it is one of the multimedia functions defined in AHK. Doing it over a LAN is not something I have tried. Does anyone have AHK code on how to control a remote computer?

For clicking on arbitrary buttons in any program, that would probably best be left to using macro recorders that record your mouse movements and key strokes because I don't think there is a universal way to record the identity of a button you want to press.
Pages: prev • 1 [2] 3 4 5 6 7 ... 19 • next
view mobile/wap2 version of this page