Now - where is my Vista crew?

DC Member Programs and Projects / Anyone installed it under Vista yet?

« on: January 19, 2008, 05:45 AM »
Mouser's right - each clue gives you a lot more information than you may initially think - and removing one extra tile from the board opens up a new opportunity for using at least one of the clues in a new way to make your next step.

Yes, every puzzle can be solved purely from the clues shown!

The trick is to get used to what the clues really represent - you often need to re-check certain clues once another tile has been discovered.

The puzzles are created using an approach that I thought up myself, although not saying I'm the first person in the world to come up with it!

It's a bit tricky to explain, but here's the gist:

First select the tiles which represent the final solution, and store in a linked list. This list is shuffled around so that each clue, when created, tends to reference tiles in different rows/columns, for extra confusion ;-)

Then simply create a randomly selected type of clue to connect each tile with its neighbour. This guarantees the puzzle is always solvable without guessing. To make life harder I have a second loop around to see if any clues are superfluous, or can be combined.

All-in-all the generator is about 400 lines of Delphi, and is reasonably generic: I wrote another game using a similar algorithm which I'll post shortly if anyone is interested.
1207

DonationCoder has very kindly agreed to host a page for me which will hold some of the software I have written in my spare time. I hope you like it - the first upload is called "Deductoid" and is a simple logic puzzle game. 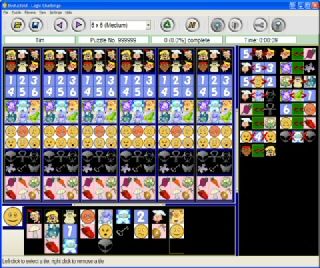