« on: May 05, 2008, 09:22 AM »
This plugin does not work here. - if i try to "configure advanced plugin options", i only get a diaolg box with "cancel" and "ok" buttons, but nothing else. farr window reacts as expected when typing "tm" etc. but obviously, no timer is being started. "settings" cannot be invoked with "tm settings".
Doest the plugin need anything like .NET extensions (which are not installed here)?
2

« on: July 30, 2007, 09:39 AM »
Mouser:
I open the options Dialog/"Plugins,Update,Fonts" an click on any of the arrow buttons for changing size. So far O.K.
When I click now anywhere in the options window, or even in the FARR main window, the recently used size button is being activated again - resulting in a change of the size I just adjusted. This repeats several times (sometimes more, sometimes less often).

I hope you understand it better now. Though very obvious, it is hard to describe for someone who has never encountered this effect before.
I have never seen a similar thing before. Nobody else has the same problem?
7

And, please also remember the other effect I noticed when changing the font size (see my first posting in this thread).
8

Yes, from the very beginning. Currently I am not using any program for changing icons.

> Does the small icon view in farr also have icons too big? (to see that view, just add "+sall" to your search)

No, the small view is ok.

> I've attached an image of my windows explorer with icon view.

I was confused because you have the same skin as I have ;-)
My icons are same size as yours.

> How about the icons on your Desktop?

I have disabled them, but they shoud be  same size.

Thank you for your efforts.
9

I have two problems:
- my icons are displayed larger than the supposed field and therefore get trimmed: 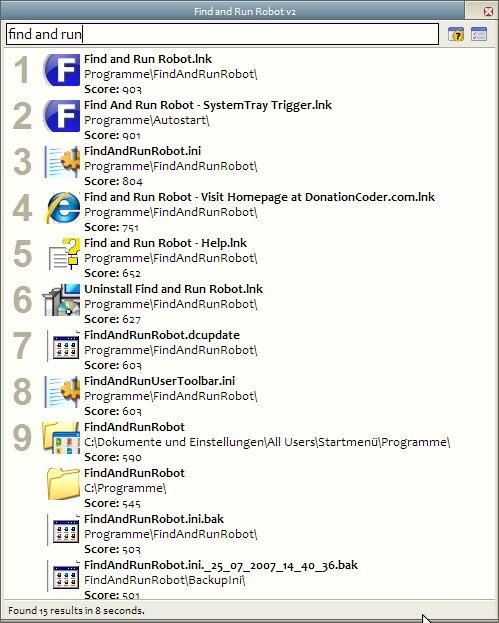 - when I change any of the font sizes with < or > button in the options form, the button will retain the focus and thus change the font size even if I click somewhere else inside any open FARR window.
Pages: [1]
view mobile/wap2 version of this page