General Software Discussion / Re: Rumors of Adobe releasing CS2 for free? (true or NOT true)

You can also try Suction http://www.geek-repu...om/software/suction/

I reviewed Suction last year and added a list of free application with similar capabilities at the end of the review. If you pardon my self-plug, you'll find the names of all the apps here http://www.instantfu...oves-files-from.html

2. Also, try to connect the USB drive to your computer while it is off and then boot with the bootable disk.

3. Creating a Easeus WinPE bootable disk rather than the default linux bootable disk may also resolve your issue.  Most of the bootable disks from backup/recovery vendors are linux based by default and may give an option for WinPE based bootable disk.

3. The Easeus WinPE disk is probably not available with the free version.

If you are using Windows 7 what about Backup & Restore built into windows. Does full system imaging to external hard disks and DVDs. It automatically includes system partitions but you can add in extra partitions too.
-Carol Haynes

Windows 7's Backup & Restore doesn't compress the disk image. If your partition has 30 GB of data the disk image will be 30GB. Third party tools usually offer compression. Easeus Todo Backup reduces the image by more than 50%. So the 30 GB partition will take only 15 GB or less to store. Saves HDD space.
5

« on: February 27, 2012, 12:04 PM »
I'm using Easeus Todo Backup to create disk image. It's a great program, but the trouble is it cannot recognize external USB connected hard drives when booting from the recovery disk. Because of this I cannot restore an image saved on an external drive.

Does anybody know of a free disk imaging tool that can identify external hard drives when booted from their recovery disk?
6 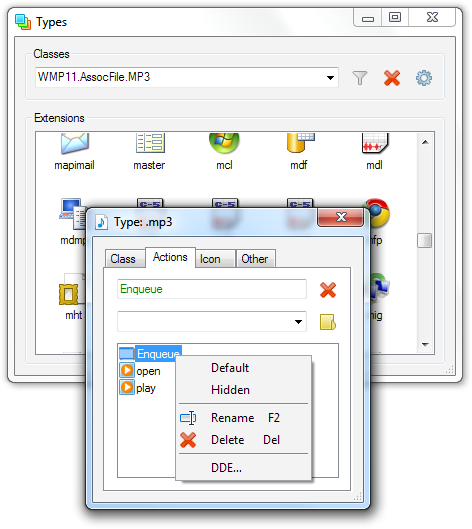 Did a review some time ago http://www.instantfu...sociation-icons.html
(shameful self plug

However, what makes Orbit Downloader really good as a media catcher, is "Grap Pro", and this works only with Internet Explorer, not "ANY browser".
-Curt (August 01, 2011, 12:09 PM)

Open GrabPro, click Actions > Preferences > Monitoring and check the boxes against the browsers you want it to work. ALL browsers are supported. I have been using it to download videos through Chrome and Opera.
10

Use the Show Images button to rapidly switch images on/off (or use cached images only).
Via the same button, change the display mode to user mode etc. I use this a lot to remove clutter from a web page.

This is my favorite. I always browse with cached image. Pages open in a snap.
13

You forgot the rarest feature that even extensions rarely implement in other browsers: 1 and 2 for switching between left and right tabs as well as customizable keyboard shortcuts, ones that allow things such as ctrl+shift+w to close the tab and instead of switching to the right, it switches to the left.
-Paul Keith (March 02, 2011, 11:14 AM)

Those were just from the top of my head. There are tons of hidden features.

Oh, another one: open the side panel, click on the '+' sign and select "windows". Now open the windows panel and you can see the list of all opened tabs. Ta-da! that is the tree view Chrome and Firefox is experimenting with now. Opera had it for years. Now you can drag and arrange tabs and even move them from one window to another.

Sigh...too bad Opera keeps hiding and switching these around now. Unless you saved your keyboard shortcuts file, expect a lot of these hotkeys to disappear or change on a whim. I'm not even sure they even have a hotkey for saving sessions with the active window checked. Opera's features are getting a re-haul and I apologize for sounding like a hater, I just wanted to warn users who might think to switch to Opera specifically for those features.
-Paul Keith (March 02, 2011, 11:14 AM)

Thats' a good advice. Backing up the opera settings folder is what I do.

« on: February 17, 2011, 03:08 AM »
You can automate installation of software by using silent switches (use Universal Silent Switch Finder ) and AutoIT scripting tool. I wrote a small tutorial a while ago.

I just thought I'd chime in and say that I did assume they were official mockups because I don't follow LibreOffice close enough to know that documentfoundation.org is the official developer and I didn't think it would be unusual for another website (Web Upd8, which I've never heard of before) to post news about (official) mockups.

It's not uncommon for news blogs to get (sometimes exclusive) screens or information from official sources and report on it. I assumed this was the case with these mockups.

Although if I had bothered to click through to the article and read it, it does make it clear that these are not official. So my ignorance is mostly my own fault.

Since these are just fan-made images I do agree that it changes the discussion somewhat, from "Oh, look what they're considering" to "Oh, look what someone who doesn't necessarily have any influence on the decision thinks they should consider."
-Deozaan (January 24, 2011, 09:37 PM)

Ah! At least someone agrees with me.

Uh, I did. Right there in the first sentence: "Web Upd8 has the latest LibreOffice UI mockups...." And it's also in the subject line.

Mockups can be official and unofficial. If the mockups come from the official team it means that the proposed designs could very well make into the actual product. Any other mockups by independent designers are unofficial. They are unlikely to find their way into the final product, unless the product developers embraces it, in which case, it becomes the official mockup.

These mockups have some great ideas. And Libre is very open to suggestions.

So until somebody at Libre says this particular concept is a complete crock and won't be considered, it remains part of the meme surrounding LibreOffice. And being an open software project, there's also nothing to stop the implementation that interface as a side project even if the Document Foundation's LibreOffice programming team decides to ignore it. (I say ignore because you can bet somebody has already brought it to their attention.)

There's even a page on their website specifically for UX and Visual designers. Link here.

Note: DevArt is consulted for design ideas and inspiration a lot more often than most people realize - so don't rule something out just because it's found there. I've seen many interface concepts displayed on DeviantArt that mysteriously appear in software products later on.

I agree what you say, but my initial argument still holds - that they are not official, so don't pin your hopes on THIS particular design. And just like you said, there could be and IS dozens of Liberoffice designs floating around the web, any of which (or none) could becomes the actual UI.

I just want to say that if you don't label a mockup as unofficial, people assume they come from the developer.
18

@OP should have posted this vital info. Renders the whole discussion useless

Yes it does, but the ad is unobtrusive. Are you really not using the software for such a trivial matter?
20

General Software Discussion / Re: Anyone have a nice, clean XP theme that I can download?

( Rather exquisite redhead on one of those wallpapers too! Always a big plus AFAIC.

A semi-clad beauty always increases the oomph factor of the theme.
22

General Software Discussion / Re: Anyone have a nice, clean XP theme that I can download?

Detects your location from IP and displays weather info retrieved from Weather.com
24

« on: April 06, 2010, 02:14 AM »
# An option to move programs folder, my documents, app folder etc to another drive during installation
# Ability to load windows from last hibernation file in the event of a crash.
25