This app will make it easier to analyze a chunk of text and see useful information. Its focus is analysis rather than manipulation.

I've been dealing with some rather large log files at work lately, and I find myself dissatisfied with my ability to extract useful information from large bodies of text. Crafting find-and-replace queries, importing to Excel, and visually scanning for data are all tedious processes that dance around the goal: gathering information and answering questions. This tool will be different. Somehow.
2

This utility will make it easier to submit helpful, consistent bug reports to any developer or project.

User feedback is valuable, but much of it is hastily written, inconsistent, or never sent at all. Testers and users often find it tedious to log all of the little details and ideas they encounter, so the developers don't get the best feedback possible. This is a tool to keep those thoughts from being lost. A user will make a list of apps, and each one will be associated with information like an email address, support website, or log folder. I'm still fleshing out the ideas, so I'd really love suggestions and ideas. Look forward to it!
3

« on: December 06, 2011, 07:18 PM »
Shelves is a concept extension for Google Chrome that's been jumping around in the back of my mind for a long time now. I've been waiting for NANY to find the motivation to work on it, though (and waiting for Christmas Break to find the time!).

The catch is this:  Even though Shelves would be a great thing to have, it's not a very exciting product. Most people won't really care about it. That's perfectly fine, because most people aren't part of its target audience anyway. But I want to release something broader for NANY if I can.

So this is my pledge:
I will dig deep into my dusty old list of programming ideas. If I can find one that's got more oomph and if I can complete it in time, you'll see something besides Shelves here. If not, then Shelves it is, and a few Chrome extension developers will get a late Christmas present.
4

Update:
School's started, and so development is taking a big hit.  I'm getting swamped with work, and Search Packer, one of my favorite projects, is being forced onto the back burner.  Nevertheless, I intend to have a working version out for NANY!  Late nights are no match for a coder's spirit, and I'm going to have something released even if it means consuming my Christmas Break with coding.  Incidentally, I'd probably be coding anyway, so it's not a huge deal.  Oh, well.  It shall be done.

Update:
I'm not coming along at all anymore.  School got too crazy for me to code at all before the break, and Search Packer is too big for me to finish it in the time remaining.  I still really want to make Search Packer a reality, but now is not the time for that.  I have changed my submission to another pet project I've had for a while, and it's called Goodness (until someone can suggest a better name).

Goodness is a Chrome extension designed to strengthen users of the internet.   And by "strengthen," I mean religiously.  I belong to the Church of Jesus Christ of Latter-day Saints, and I want to help people.  Specifically people who are recovering from a pornography addiction, but I feel like this could help anybody.

The web page listed for Goodness above will be updated once the extension is released, but for now, this page is the main discussion and information point for Goodness.

« on: April 12, 2010, 08:49 PM »
I dunno if I'm just slow, or if I've discovered a secret gem that the Devs at Microsoft threw in for fun (the first seems more likely), but I just noticed a few days ago that Windows 7 has a nifty tool for viewing folders - I'd call it something like inline filtering.

On the bars above a file list, there are the regular options to enable you to sort the items you're viewing, but up 'till now I didn't notice the arrows on the right.  These bring forth pop-up boxes to enable you to quickly filter the files by the same categories you can sort them by.

Of course, a picture is worth a thousand words.

Laugh at me, please, if this has been around since Vista.

If this feature existed during the days of XP, I'll beat myself with a fish.

« on: March 18, 2010, 11:44 PM »
Okay, so I was kind of shocked when I searched DC for this topic a moment ago, and I found nothing.  This really surprises me, since DC is usually the best place to go for info on all the best software.  Therefore, I feel compelled to bring to light a certain extension that has totally and completely enhanced my web browsing in the space of only a couple days.  Ladies and gentlemen, please welcome:  gleeBox.

This tool is the resurrected form of the command line, an ancient interface that is only used today by the most savvy of technology users.  This command line is different, however, because of the great and spacious domain it commands:  The Internet.  That's right, a command line for your web browser.  Mostly.

GleeBox is many things.  It is a way to navigate webpages, sans mouse.  It is a YubNub command interpreter.  It can be a bookmark search, a JavaScript launcher, a sharing tool, and virtually everything else you can do on the Web.  It can nearly replace your address bar, your search bar, and your tab bar.  Sounds great, eh?  Well, I'm probably playing it up a few dozen notches, but nothing I've said here is in any way completely false.

I'm going to provide an inadequate list of some of the best ways that I use gleeBox:

I'm only just kidding when I say that I don't think I can go back to the Internet without gleeBox; it's become that indispensable to me.  I've been coming up with some nifty ESP Visions (wonderful feature, see User Manual), and I've put most of them on the TipJar site.  Look for pyrohacker's posts.
7

« on: February 13, 2010, 03:24 PM »
I've been interested in the Ubiquity add-on for Firefox since I first heard about it, and wished that it had fared better.  It seems mostly dead now, but I think we can fix this.

Here's a quote from the developers of Ubiquity:

Being relatively new to the Mozilla world, we found it difficult and time-consuming to write extensions to Firefox. There is something largely last-decade about requiring restarts to add a new feature to your browsing experience. It’s ironic that the entire Web is on a push model, yet the browser—the most fundamental tool of interacting with the Web—is on a pull model.

Well, in the case of Google Chrome, that problem has been solved.  Extensions do not require restarts, they are auto-updated by push, and they are written using standard web languages - XML and JavaScript.  This video shows a basic overview of creating Chrome extensions.


The core idea of Ubiquity is, in my opinion, a lofty but worthy goal:  Allow users to not just find, but DO things with the web, in the way that is most natural to them - telling it what to do.  That's my interpretation, anyway.

FARR and other launchers were built to do things with your computer, using objects that are (compared to the web) static and rigid.  Tools like Ubiquity are different because they should be designed to do things with the Internet, in all its 404 error glory.


I know it would be a tough project to tackle, but that's just the sort of thing that I know the valiant coders here at DC can handle.  As for myself, I just learned JavaScript from the excellent tutorial in the Programming School section, and I know basic HTML.

Ubiquity is open source, so at least there'd be a starting point.
I've come across some other things that I think are relevant:

SubDiv was built to organize folders that are constantly being filled with new content, such as a 'Downloads' folder. When you are continually throwing files from the Internet into a folder on your computer, that folder becomes very disorganized (at least for me). SubDiv will take those files and put them into folders based on the day they were created.

Features
Portable - Program is drive-independent and saves settings using .ini files, so it can be placed on any computer.
Currently sorts based on the day that a file was created.

Possible Features (not set in stone) 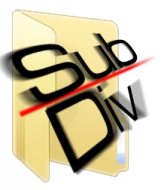 Installation
Place the .exe file into the folder you wish to have sorted.

Using the Application
Run the program! Current settings are:

Uninstallation
Delete the .exe file and the .ini file. Please note, however, that there is no way to undo sorting at this time.

Known Issues
No issues that I'm aware of, other than incompleteness!

It's difficult to test a program that is based on taking a long time. Let me know if you run across any bugs.

Since I don't know how to manage files and folders in C++, this project has been made in AHK.
Any suggestions would be warmly welcomed!
Pages: [1]
view mobile/wap2 version of this page