Now this time, some of you may know what Cortex Command is, due to the extremely
generous act by Scancode a few weeks ago. But i take it that not everyone knows
what it is, or that you may just want a rating before you try it.

See, Cortex Command is a retro-style platformer-like shooter game, which is still under
development. Right now there's only a minimal part of the campaign available, but Data,
the creator, has said that there will be a full and extensive campaign once it's done.
Although it's a WIP game, Data has been charging for licenses since Test Build 19.
The current price is 18 US dollars, but should be expected to rise as the game nears
completion. The current test build is 21.

In game, everything is based on the pixels you see. There are basically three types
of pixels: Active pixels, which are moving and have physics applied to them, passive
pixels, which are frozen and act like terrain, and background pixels, which can't be
affected by the player at all, and are generally behind everything.
This might be misleading though, as one might get the sense that you just control
a pixel or something, which is entirely wrong. Your (standard) avatar would basically
be a brain in a jug, sort of. This brain can control clones, robots, rockets and so on,
and you can freely switch between all your units.

But there are two things that really makes Cortex Command shine: The physics, which
applies to anything that is active, and even to terrain to a certain degree, and the
near-absolute modding freedom. Everything except the very core of the game can
be modified, and you can also create your own content. Even the core is starting
to get exposed with the new Lua compatibility! These mods can be anything from
a simple pistol to a hypercharged giant walker with a cannon that can blast half
the level away and so on.
Though modding may be hard at first, you'll get the hang of it pretty quickly, especially
if you have previous experience with coding, which I'm fairly sure many of you here have.

Coding isn't the only thing though, because if you want to make your own stuff, you need
to make the graphics too, in the form of sprites. Cortex Command uses an optimized 8 bit
palette, but there are still limited options. If you aren't keen on making sprites yourself,
you can always ask some of the better sprite makers in the forum.

The physics deserve a second mentioning though, because as said earlier, pretty much
everything is affected by physics, in one way or another. If you make a gun that fires
a huge, extremely heavy projectile at high speeds, you're going for a trip through the
level too, because of the recoil. If you hit someone with that projectile, depending of
the sharpness/impulse of it, they may either just be wounded, pierced entirely, sent
flying or splattered all over the place, in the most literal sense. More things can happen
of course, depending on what kind of projectile you're firing.
You may also find yourself victim to one of the dreaded Drop Ship doors, which are the
hatch doors attached to a standard drop ship, and that can happen in various ways,
but the most common is being smashed to a mist of blood and gore. Or robotic parts,
if you're using a robot.

It's also an extremely violent game, as you may have figured. While it is mostly cartoony
in appearance, it is very common to see someone having his head shot to pieces by
a machine gun. Dismemberment almost always happens on every actor (Soldier, robot etc.)
in the game, one way or another. It could be a drop ship door, it could be an SMG, and
it could be a vicious body slam from your co-player. That's right, you can play with other
players too. Only on the same computer though. You can be 4 players in total, scattered
over two teams in whatever way you wish.

OK, now I've written perhaps the longest introduction in my life, so maybe i should get
on with the important parts of the review.

- Almost nothing is predefined. Emergent gameplay get!
- Lots and lots of physics.
- Almost absolute modding freedom.
- Fantastic graphics made by Arne Niklas Janson, AKA Prometheus.
- Tons of user-made content.
- Gameplay that's like a mixture of Worms, Soldat and Liero.

- Somewhat pricey for a WIP game. (I say it's worth it though)
- Can be seriously taxing on your CPU at times.
- Unfinished.
- Physics engine could do with optimizations.
- Collisions between moving objects can be dodgy.
- Community can be hostile/aggressive at times. Cortex Command is an amazingly fun game, despite it being unfinished,
and it has lasted a lot longer than most of the other games i play.

If it was finished, I'm pretty sure it would land at a 10/10, even with
a critical rating from me.
I suppose it's the modding that gives it the longevity...

You can download the trial and buy the full version in there.

The fan forum, where you can talk, download mods and such.

And now, i will end this frighteningly long review with an illustration, made by Prometheus.
(Don't worry, this image won't just disappear, it's on their main website)

Right now, what you're probably thinking is something along the lines of "What the heck is Toribash?"
Well, it's actually pretty hard to explain, but i shall try. Toribash is a turn-based fighting game, where
you control a ragdolls joints and set them to do whatever when you press space, or in case of on-line
play, when the time runs out.

One thing that really makes Toribash stand out among others isn't only that it's an indie game, but
that it's also entirely physics based, with no pre-rendered moves or anything. Everything is rendered
real-time. One should think that this would be enormously taxing for ones CPU, right? But this isn't
true. While the early versions of Toribash was very unoptimized, the new versions run incredibly
smooth, considering the amount of calculations done.

And you know how people say that the best things in the world are free, right? Well, guess what?
Toribash is free! Ever since version 3.0, Nabi Studios, the creators of the game, has removed the
20$ price tag from the game, and now they earn their money by charging for many kinds of optional
services.

Toribash even features its own little economy system, using a virtual currency called ToriCredits.
These ToriCredits (Or TC as they're usually called) can be used to buy many different things in
the ToriShop, like colors for your ragdoll (Or Tori), custom textures, colored trails and so on.
Normally your TC income is relatively low, giving you 5 TC for every fight you win on-line, but if
you're impatient, and not low on cash, you could buy a ToriBooster, which will increase your income
to as much as 10,000 TC per win! Needless to say, the better the ToriBooster, the more expensive
it is. One that will get you 50 TC per win is, of course, much cheaper than one that gives you 1,000.
To give you a little comparison, 1,000 TC is the equivalent of one US dollar. Some players have even
taken advantage of this, and started places where you can buy cheap TC from them!

But now I've yapped out a wall of text already, and this is only the introduction, so I'll try to confine
myself a bit in the following sections...

- Really innovative fighting system. Seriously, it's a one of a kind game!
- Well optimized physics.
- Very accurate physics. When it doesn't glitch, that is.
- Fun multiplayer.
- Hooking gameplay. Once you've started with that replay, you just can't stop!
- Exceptional modding capability. You'll be amazed at what people have done.
- Lua scripting possible. Makes for some interesting things.
- High level of customization of your Tori/ragdoll. (Joint colors, body part gradients, textures...)
- Ability to host own servers.
- Free of charge!

- Extremely sharp learning curve that has scared many off. Though there is a tutorial, it only shows
the bare bones stuff, the rest is up to you.
- Customizations can be rather pricey.
- Too many mid-game quitters on-line.
- Community can be rather hostile at times.
- Somewhat dodgy collision detection between players. (High speed attacks might phase through a limb entirely)
- Glitches in the physics. Though not many, and rarely does anything major, they can be disrupting.

Screenshots (Sorry about the low quality)

You can kick Uke (The ragdoll you attack in singleplayer) in the face with a mighty leap... 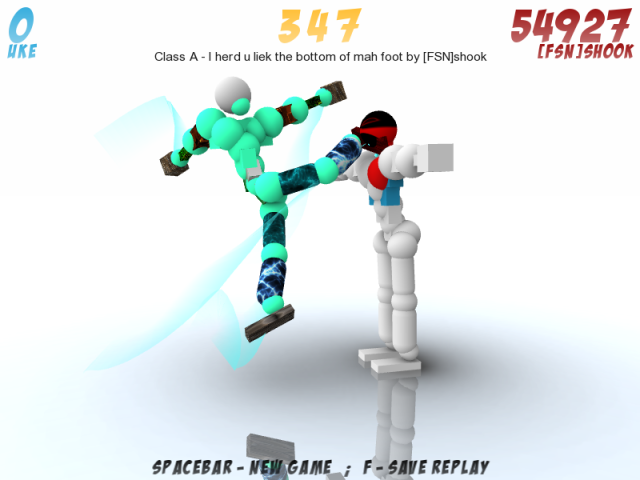 Or you can tear him to pieces... 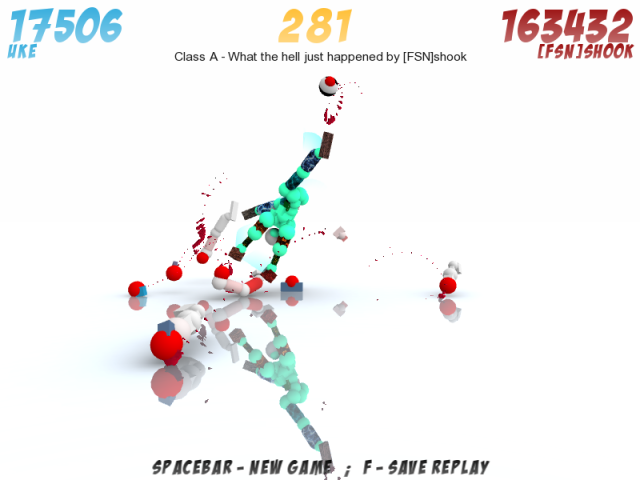 Or you can tear EACH OTHER to pieces in on-line multiplayer... 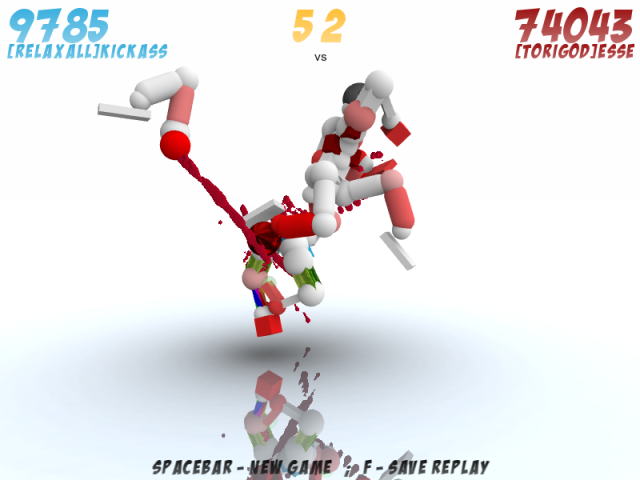 In any case, it all goes on like this. 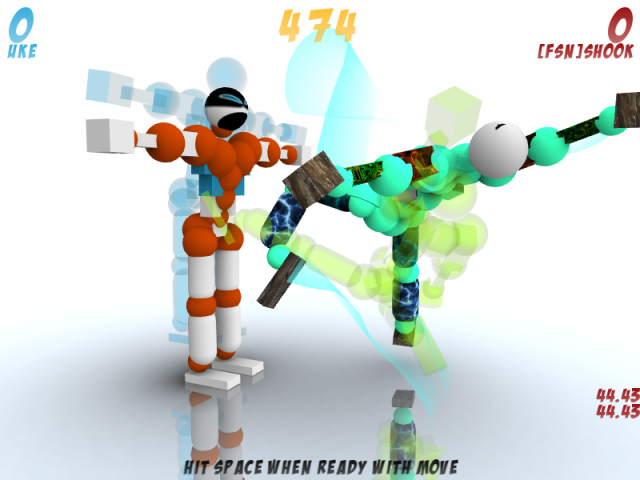 From a devout players point of view, I'd naturally rate Toribash 10/10, but you're probably
here for a critical rating rather than an opinionated rating, so it'll all add up to...

Despite all the cons, Toribash is still a brilliant game, and it's even free! So regardless of whether
you have a bloodthirsty monster inside you, or you're just a player who wants to have some fun,
Toribash is sure to please you!

Hopefully, this isn't in the wrong place. Please, tell me if it is.
So anyways, i'll be doing a review of Audiosurf, a good little (Rather large actually) indie gem.
As the name implies, you're basically surfing your audio in this game, collecting
colored blocks to make matches in a vivid enviroment that changes to match the
pace of the music.

Now, let's start out by seeing the pluses.

Pro #2: Great game if you enjoy music, especially because you can use any
track imaginable.

Pro #3: It's compatible with almost all music formats, even .flac and .ogg!

Pro #6: "Audiosurf Radio" makes up for lack of music with new tracks every friday.

Pro #7: Achievement system gives you something to go for.

Pro #8: The game can appeal to both headbangers and Mozart fans, as the game
is no faster than the music you play.

However, no game comes without minuses.

Con #1: Fairly sharp learning curve. There is a tutorial, but the rest is up to you.

Con #3: Some gamemodes are undertipped pointwise compared to others.

Con #4: Nearly impossible to get a high score on any known song unless you've
been playing non-stop since the beta came out.

Con #5: Major jump between the difficulties. A player who's used to Casual (Easy)
does not stand any chance if faced with Elite (Hard).

Con #7: Some achievements are impossible with the Mono characters.

Con #8: There's not much action for you if you don't like heavier music.

This would add up to an average score, right? Hell no. The pros are so much
bigger than the cons, so i will end up giving it:

If you like listening to music, i strongly recommend trying Audiosurf. It's one of
those games that will have you staring intensely at the screen while playing.

I hope you got something out of this review!
Pages: [1]
view mobile/wap2 version of this page